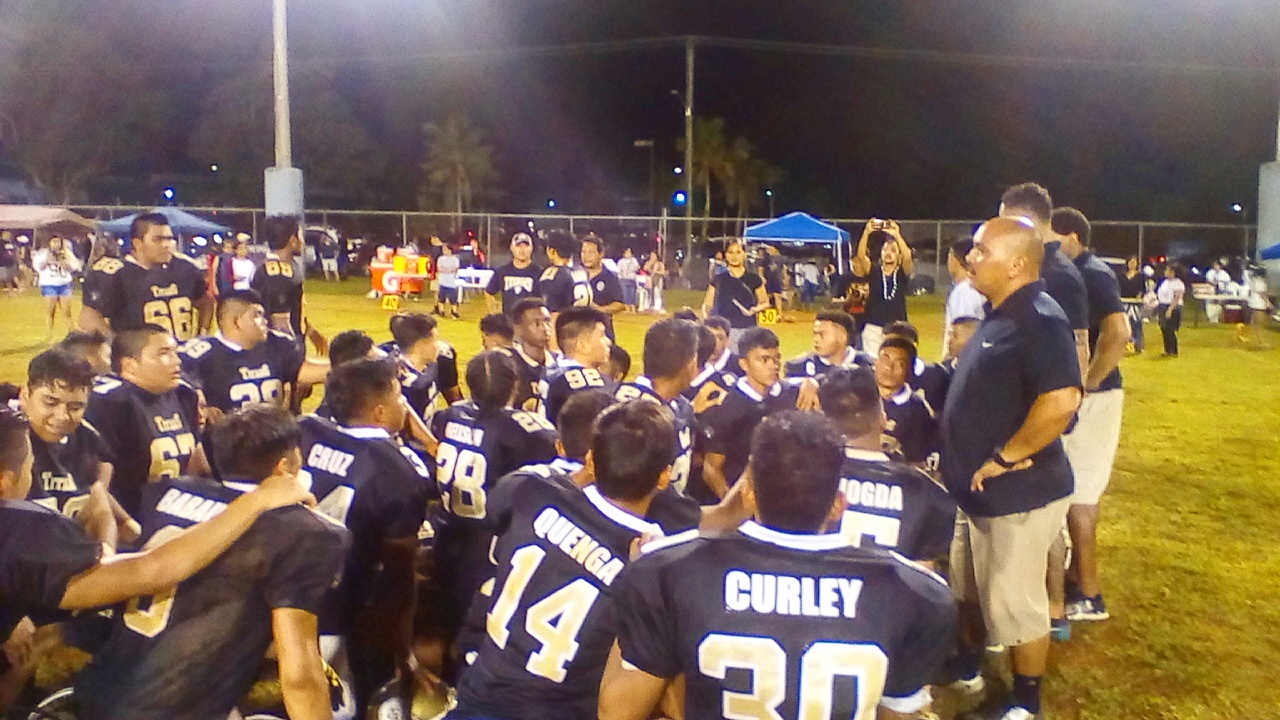 The Tiyan Titans celebrated their homecoming by taking home a win over the Sanchez Sharks, who lost FD’s homecoming game just last weekend. This game was a tight one, as the final score was 21-12, with the Titans needing a lift from a late touchdown to secure the win.

The Sharks offense came out after they received the opening kickoff, and had possession of the football for a long 14 play drive that produced 78 yards and a touchdown run from Joshua Sablan, who scampered eight yards into the endzone. The kicking unit missed the extra point, so the score remained 6-0.

The Titans had their own miracle when the offense faced a three and out and were forced to punt it. However, instead of securing the ball, the Sharks punt return team fumbled the ball, which gave the Titans another chance. A few plays and 25 yards later, Javier Lujan found himself in the endzone. Tiyan got the PAT, which gave them the edge by one point at 7-6.

The Sharks had other plans however, as they scored another touchdown, which would be their second and last for the game. This one was put in the books by Nicolas Foster after he ran 15 yards to the end zone. This made the score 12-7, Sanchez putting pressure on the Titans.

Before halftime, Tiyan put up a huge touchdown when Kobe Quiambao passed a 58 yard bomb to wide receiver Tyler Pangelinan. This put the Titans back on top 14-12 at the halftime break.

The Sharks turned up their defensive tactics in the third quarter, not allowing any major plays to be made by Tiyan.

The Titans got back in the groove of things halfway through the fourth quarter, when Pangelinan caught his second touchdown pass of the night. This one was a 72 yard pass reception after the Shark defenders were out ran. This put Pangelinan over 100 yards in the game. This made the score 21-12.

“He [Tyler Pangelinan] ran a little too deep but I had to throw him a lead and hope for the best,” said quarterback Kobe Quiambao after his huge performance.