ANGELS GET NARROW WIN OVER EAGLES

The Angels needed big plays on both sides of the ball to stop the Eagles who came in determined to avenge a 6-3 loss in the first half of the season, but in the end the Angels prevailed again in their second meeting with a narrow 14-12 victory. 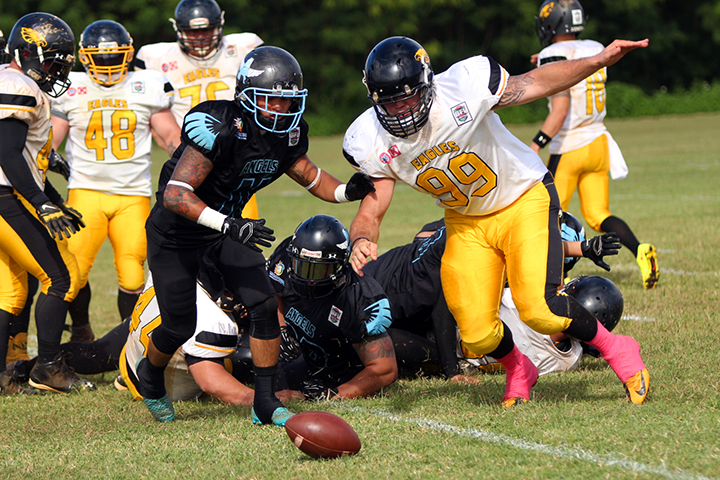 The Angels needed big plays on both sides of the ball to stop the Eagles who came in determined to avenge a 6-3 loss in the first half of the season. In the end though, the Angels prevailed with a narrow 14-12 victory. Two extra point attempts converted by Angels’ kicker Miguel Novoa sealed the deal.

After a scoreless first quarter, the Angels put the first points on the scoreboard when Phillips and Mendiola connected for a 17-yard TD. The scoring play came with just under two minutes left in the first half. Novoa split the uprights, making the score 7-0 at the break.

The Eagles raised their game in the second half and came out firing on all cylinders. Kelvy Coney was the go to man for Eagles’ quarterback JC Carreon. Coney made a leaping grab at the one-yard line that setup a one-yard touchdown run by Carreon. A failed two-point conversion left the Eagles trailing 6-7.

That Angel lead would grow larger later in the third when Phillips and Mendiola linked up for a 52-yard score. Novoa converted his second point-after attempt, making the score 14-6 and that’s how it would stay heading into the fourth.

In their last meeting, the Angels stole the game away late in the fourth and this time Carreon tried to rally his team to a comeback victory. Carreon marched his team down the field and then Guy Hayes caught a swing pass to the outside and took it to the house for a 33-yard score. However, the Eagles could not capitalize on the two-point conversion.

The Angels defense came up big in the end. Cornerback Joel Limtiaco made an interception to kill a drive that was moving nicely for the Eagles. The play of the day though was an interception by safety Chris Santos in the end zone that put the nail in the coffin.

The contest could have been more clear-cut, but costly penalties hurt the Angels. Mendiola had a touchdown brought back in the first quarter that would have given him three on the day. In the second half, Mendiola also found himself wide open but a glaring sun caused him to lose the ball in the air.

JP Taijeron jukes out Angels’ Chomper Saralu as he makes his way down left field. (photo by Daniel Paran)

JC Carreon shoots a pass off before the Angels’ defense could reach him. (photo by Daniel Paran)

Eagles’ Kelvy Coney connects with a long range pass to get the first down. (photo by Daniel Paran)

DJ Cruz of the Angels at the ready to receive a pass for the touchdown. (photo by Daniel Paran)

Miguel Novoa rushes down the middle through a gap in the line. (photo by Daniel Paran)