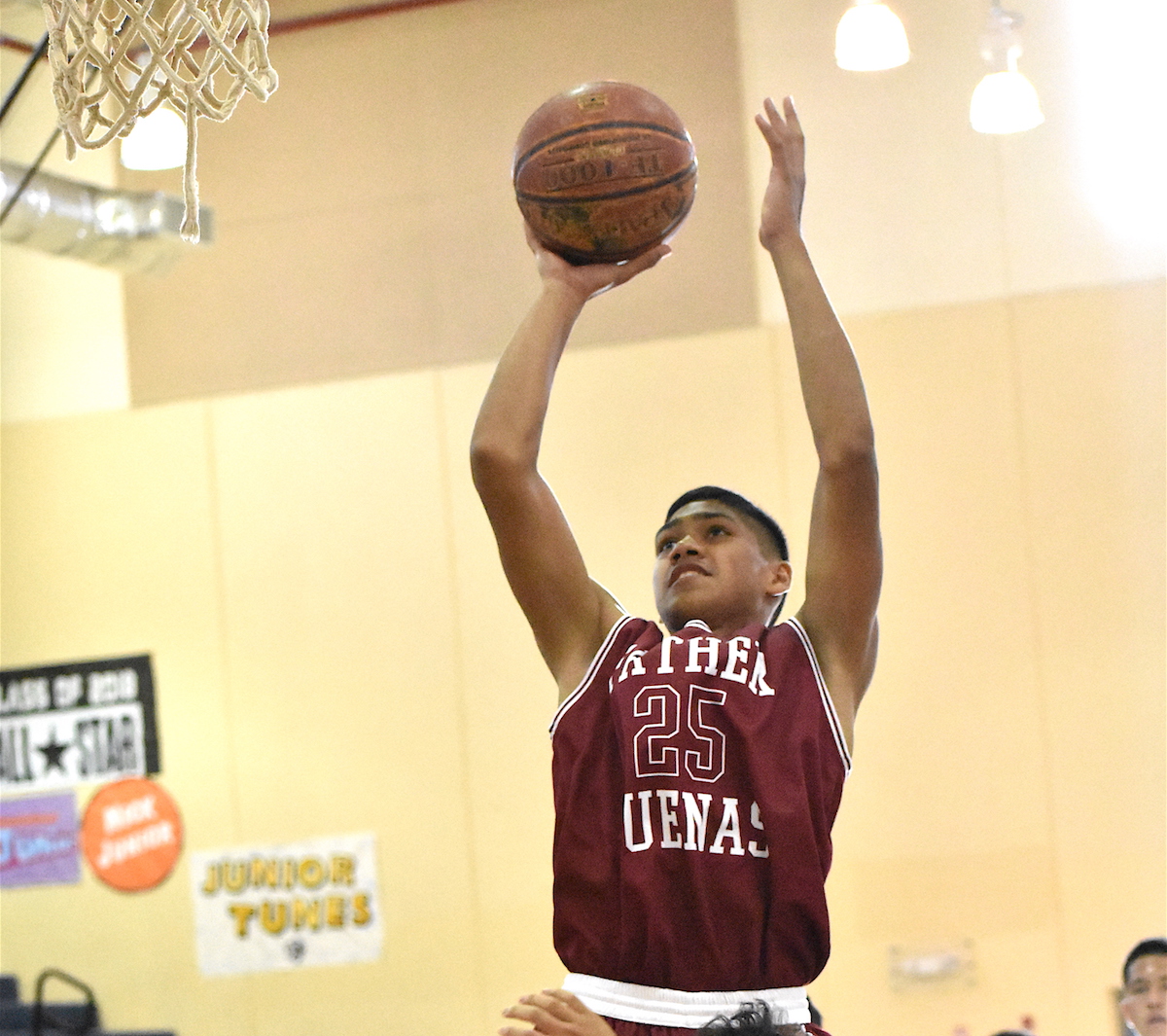 After four days of competition, the John F. Kennedy Islanders and the Okkodo Bulldogs 1 are the lone undefeated teams in the GBC-IIAAG 3rd Annual Junior Varsity Tournament. The two teams who finished 1 and 2, respectively, in the regular season will meet 6:30 p.m. March 1 to see who will drop to the loser bracket and duke it out with the remaining teams for a shot at the coveted trophy. Neither team can finish lower than third place.

In its 3rd year, the tournament is an opportunity for the island’s high school junior varsity teams to battle it out one more time in an effort to become kings of the hardwood, especially since there is no postseason for JV teams.

Games continue 5 p.m. Monday at Guam High School with St. Paul facing off against Okkodo 2 and Father Duenas 2 battling the Simon Sanchez Sharks. Losers will be eliminated; winners will square up 5 p.m. March 1 at Guam High. Games are open to the public.

In the final matchup Sunday, Father Duenas 2 staved off a barrage of threes from a feisty Southern High team to win 56-47 to stay alive in tournament action. Big man Aidan McDonald proved nearly unstoppable, eating up the paint with 26 points against the smaller Dolphin team.

Despite the height disparity, Southern stayed relatively close thanks to hustling defense that frazzled the FD guards. Despite the frenetic pace, the Friars refused to relinquish the win and earned a berth into Monday’s matchup against the Sharks. Isaiah Mendiola led the Dolphins with 15 points.

Okkodo 1 84, SPCS 36: Four Bulldogs scored in double digits to take the win and earn the right to play top seed JFK. With the loss, the Warriors drop to the losers’ bracket. Nico Bonita dropped 25 points, while teammates Kevin Cabral, Prince Enriquez and John Michael Lorena dropped 11 apiece for the win. The Warriors’ Tsuji Hayato shot 8 of 9 from the charity stripe in his game-high 13 points.

JFK 57, SSHS 54: Running a tight offence and a stingy defence almost paid off for the Sharks as they steadily chipped into a double-digit lead. Down by 3 with less than 20 ticks left on the clock, the Sharks’ Julio Devera let loose a three that rocked the house and tied the game. But, a foul at the half court on the Islanders’ Jerry Ngiraremiang put him on the line. He sank one of two for the one-point edge. A miscue on Sanchez’s end resulted in another Islander layup and a three-point cushion. The Islanders remained stubborn, refusing to let go of the lead as the clock wound down, dropping the Sharks to the loser brack. Big man Nathan Chochol poured in 14 for the Islanders in the win, while the Sharks’ Isaiah Malig dropped 19 in the loss.

Okkodo 2 63, FD 1 59 Double OT: The Friars’ Christian Taitano hit his only three of the game to send the game into overtime and give the Friars a shot at staying alive. The Bulldogs had another shot at icing the game, but miscues on defence cost them as the Friars tied it up for a second overtime. In the final overtime, FD struck first off a drive from Cisco Uncangco. The Bulldogs cranked up the defence to force turnovers and quick buckets from Jarwin Espiritu and Lino Arizanga for a 3-point edge. With the Friars forced to foul, the Bulldogs converted at the charity stripe to eke out the victory.  Espritu and Arizanga dropped 17 and 15, respectively in the win. Kobe Santos added 16 — 14 from the line — to ensure the win and eliminate the Friars. Colin Santiago led the Friar freshmen squad with 13 points, while teammate Uncango chipped in 12 in the loss.