MATUA: PACKERS GET WILD WIN OVER ANGELS FOR TITLE

The Metgot Packers played spoiler to the Winward Hills Memorial Hal’s Angels ‘three party’ after pulling off a come from behind victory for the clubs first ever GNYFF title Saturday evening at the Hal’s Angels Field. 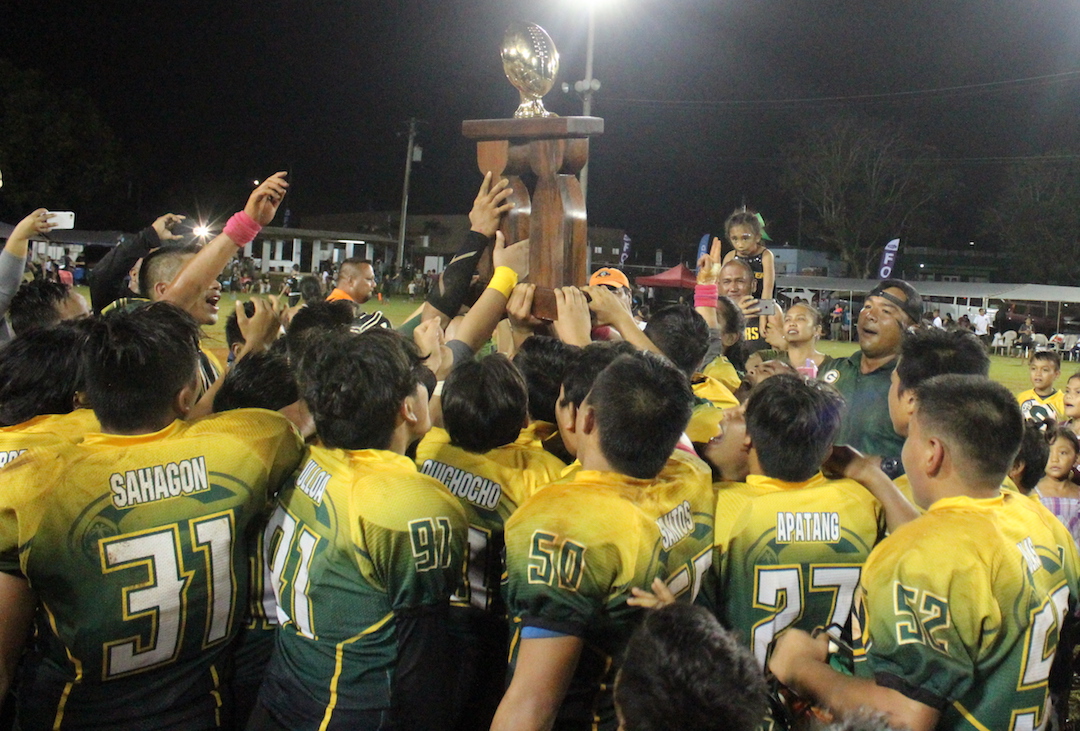 The Matua Packers played spoiler to the Winward Hills Memorial Hal’s Angels ‘three party’ after pulling off a come from behind victory for the clubs first ever GNYFF title Saturday evening at the Hal’s Angels Field. Trailing 13-6 in the final period, the Packers put together a final game-winning drive to upend the Angels 14-13.

After two big runs by Jayton Penaflor, running back Davey Santos punched in a 15-yard score to get the Packers within 13-12, leaving them with a peculiar decision; attempt to convert a one-point play to force overtime or line up for a two-point kick for the lead.

Penaflor was the holder and Dreyvin Apatang got a clean kick off as it sailed through the uprights sending the Packer fans into a frenzy as their team completed a 13-0 comeback with just 36 seconds left on the clock for the Angels.

“It was a gutsy call, but you know that’s what you’re here for; you’ve got to be aggressive,” said head coach Drew Apatang.

For the kicker Apatang, the weight of the world was on his shoulders, but also being the teams quarterback means pressure comes with the territory.

“Everything was going through my head. It felt like everything was on me and I had to pull through for my team and my coaches put me there because they trusted me,” said Drey.

A ‘Hail Mary’ pass from Angels quarterback Darren Cepeda was picked off Bradlee Zapatos, one of three interceptions, to seal the game for the Packers.

Time of possession was dominated by the Angels with their first drive of the game nearly taking up the entire opening period. In their opening drive, the Angels reached the red zone where they turned it over on downs at their seven, putting the Packers in tough field position.

A three-and-out forced a Packer punt, which the Angels used to put up the first points of the game. Angel George Martinez got into the backfield and blocked the punt while teammate Cristian Cruz recovered the ball in the end zone to give the Angels a 6-0 lead. A failed point after left the score at six.

The Packer defense shutdown the Angels second drive of the game in the 2nd quarter, stuffing a punt attempt on 4th down for a turnover on downs at the Angels 10-yard line. The Packers would fail to capitalize on their great field position as they fumbled the ball away to the Angels two plays into the drive.

The Angels would turn that turnover into seven points of their own after a halfback pass from Marcus Camacho to Tre Taylor worked to perfection for a 29-yard score, PAT successful.

The Packers go crazy after taking the lead for the first time late in the 4th quarter. (photo by Robert Balajadia)

“The [Angels] made us a one dimensional team. I had to remember that we don’t play ‘Angel-ball’ we play ‘Packer-ball’. I cracked into the playbook and stopped being conservative and that ultimately played out successful,” said Apatang.

The Packers wasted no time getting back into the game as they took their first drive of the second half to the house. A halfback pass of their own from Penaflor to Christopher Cowart for 50 yards put the Packers on the board, but still trailing 13-6 after a failed PAT.

The Angels chewed up a ton of clock on their next series, driving all the way to the Packers five yard line as the 3rd quarter ended.

A big 15-yard penalty on a would-be Angels touchdown pushed the Angels from the five yard line to the 20 where they eventually turned it over on downs. A pair of costly penalties on defense set up two first down runs from Penaflor to get to the Angels 30.

“It really motivated us, it allowed us to push a lot harder,” said Santos on the big defense stop.

Apatang connected with Cowart for 15 yards on a quick pass and Santos only needed one touch a play later to get into the end zone for the game-winning sequence.

Packer Jayton Penaflor gets a chunk of yards on a run in the 4th quarter. (photo by Robert Balajadia)

Angels Noah Medler goes airborne on a hit in the 3rd quarter. (photo by Robert Balajadia)

Angel Marcus Camacho points to where his blockers should go on a run. (photo by Robert Balajadia)

The Outlaws winning cheerleaders put on a halftime performance.

Tre Taylor gets open on a halfback pass for a touchdown for the Angels right before the half. (photo by Robert Balajadia)

Jayton Penaflor gets swarmed by the Angels for a loss. (photo by Robert Balajadia)

Angel Ethan Lizama manages to pry a fumble away from Davey Santos. (photo by Robert Balajadia)