PANTHERS NO STRANGERS TO STARTING OVER

Not many Guam high school football teams go through a rebuild quite as often as the ever-changing Guam High Panthers do and 2017 appears to be a massive overhaul for the program. 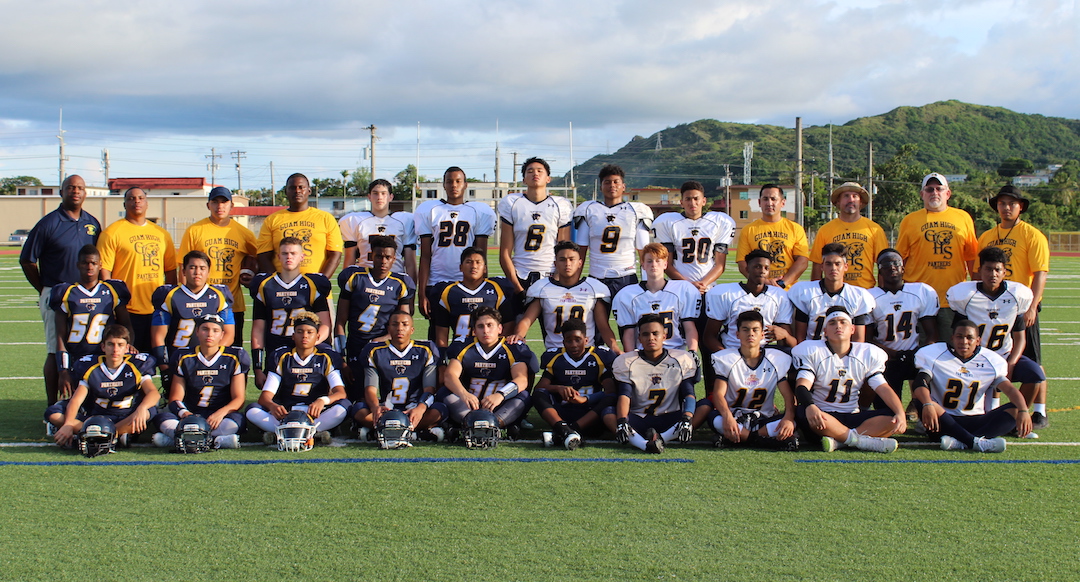 Not many Guam high school football teams go through a rebuild quite as often as the ever-changing Guam High Panthers do and 2017 appears to be a massive overhaul for the program.

Gone are the explosive runners Juan King and Avery Fernandez and instead, Guam High is welcoming a wealth of first time football players as well as a rookie quarterback which has immensely dialed down head coach Jacob Dowdell’s expectations.

“We’re going to treat every first down gained like a touchdown,” laughed Dowdell. “We lost about 98% of our offensive fire power from last year’s team and 80% of our linemen are gone. Those things are so difficult to replace.”

Effort will be the measuring stick for Guam High in 2017 as Dowdell understands his team’s limits.

“If we go by numbers only then the game isn’t always going to go your way. We’re going to need to see the effort from our players on every play.”

One of the biggest standouts from the Panthers will be no short of a literal standout. 6’4″ junior defensive end Makoa Bamba has matured into the team’s defensive leader and Dowdell has seen him grow into his current captain role.

“An issue with [Makoa] has been maturity, but I’m so proud of how far he’s come and he’s been keeping his attitude positive,” said Dowdell.

Bamba will also take snaps as a receiver.

Linebacker Jayln Dowdell is another key piece to the returning squad after posting a stellar sophomore season.

“The reality is we’re about 20 students deep challenging some teams that are 50-60 deep, after cuts. If we’re comparing it to how football is out in the states, we’re a 5A school challenging 1A schools. We’re still going to do our best to stay competitive.”

Throwing in a rookie

Freshman Travon Jacobs was a standout in the GNYFF playing quarterback for the Southern Cowboys and he’s now landed a spot as the starting QB for the Panthers.

“I want him to throw the ball as much as he can and I don’t want him to be gun-shy. Not that my expectations are low, but I usually expect a lot out of my quarterback and starting a freshman is something no team would usually do,” said Dowdell.

One of the biggest resources available to Jacobs will be the addition of former Panther quarterback, and former league Offensive MVP, LJ Aguon to the coaching staff. Aguon is a product of the Dowdell system and Dowdell feels Aguon’s presence will be the best tool available for the freshman.

“Everyone know’s were going to throw the ball. [Travon] will have to remember the playbook in and out since he’s going to be the only one speaking in the huddle. I believe we’ll see him grow a little each game.”

The Panthers will kick off Friday evening against the Tiyan Titans at the Panther Field at 7 pm. In light of the competition, Dowdell sees a lot of growth within his Titan opponents, namely through their current coaches.

“Danny Cepeda (Tiyan head coach) and Joey Guerrero have done a lot for the kids and I have a lot of respect for them. They do a lot of work behind the scenes, out of pocket stuff, and that’s a big thing for me. I see them turning into a special team, I just hope it doesn’t start against us,” ended Dowdell.