The storied Southern Dolphins football season officially came to an end Saturday evening as the JFK Islanders moved past Southern in the first round of the playoffs. Though shaky for most of the game, the home team Islanders managed to hold off two Dolphin goal line attempts to get a 12-0 victory. 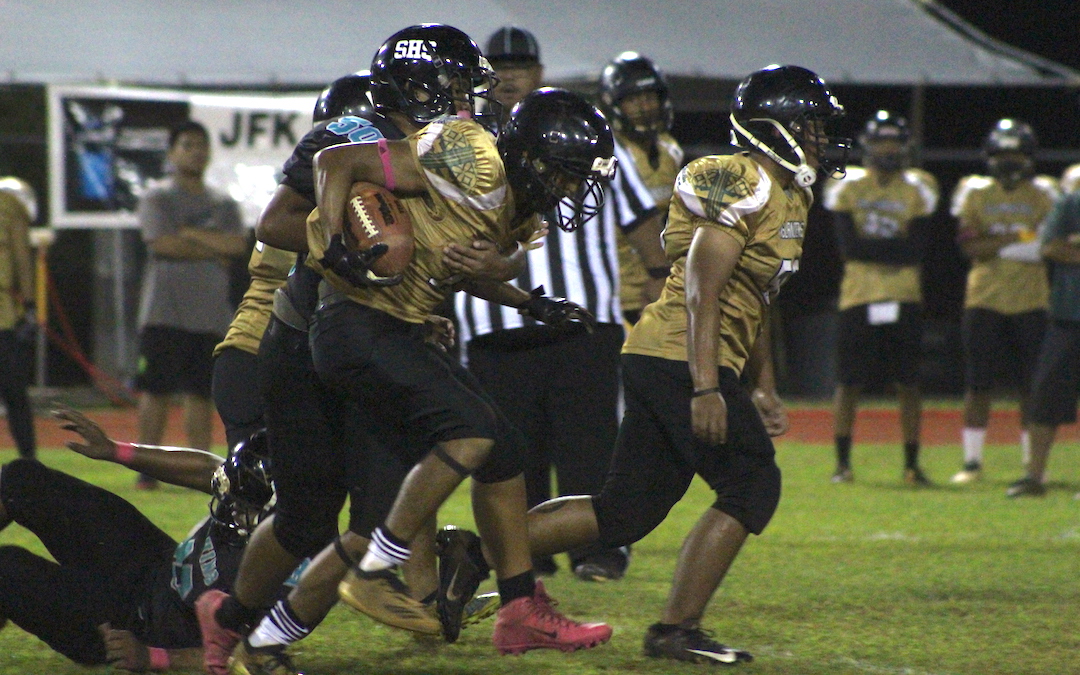 The storied Southern Dolphins football season where they managed to start 3-1 officially came to an end Saturday evening as the JFK Islanders moved past Southern in the first round of the playoffs. Though shaky for most of the game, the home team Islanders managed to hold off two Dolphin goal line attempts to get a 12-0 victory.

JFK got the games first score in the 2nd quarter after Andrew Perez connected with Nico Velez from 23 yards to take a 6-0 lead into the half.

Leading 6-0 late in the 3rd, the Islanders had a tough time stopping bruising running back Noah Rosalin after he took three carries into JFK territory to set up a first-and-goal from the five yard line. The Dolphins failed to get in the end zone after two pass attempts and two runs with the JFK defense holding strong.

“We made a lot of adjustments on the line, stack it, to try and slow down their run game. Our line managed to surge in those moments and our defense really played well today,” said JFK’s Justin Camacho who plays on both sides of the ball.

Wendy’s Players of the Game: Justin Camacho and Nico Velez

After forcing the turnover on downs, Islanders quarterback Andrew Perez converted a short pass to receiver Shaun Parker who was then stripped by Dolphin Gabriel Stanley. Stanley managed to get the ball back to the Islanders six-yard-line after a penalty to immediately set up another threatening score.

Two runs in their heavy set offense wasn’t enough to get in as the quarter expired. The 4th quarter started with Southern three yards away from tying and potentially taking the lead, but a fourth-and-goal pass from Dolphin Ethaniel Escuadra in the flat was incomplete as JFK managed to keep their lead intact.

The Islanders latest defensive stand ignited their offense in the 4th that ended in a three-yard rushing touchdown from Justin Camacho for a 12-0 lead. The depleted Dolphins couldn’t string together another strong offensive drive with a turnover on downs near midfield setting up a kneel-down by JFK.

JFK handled Southern in the season opener 28-0, but Saturday night was a much different game, facing a more inspired Dolphin team. The Islanders knew that facing the Dolphins wasn’t going to be easy, but they were more upset with themselves for all their miscues.

“[The Dolphins] came out a lot harder and they improved a lot, and we were expecting that, but the mental mistakes that we made today made this challenge even harder for us,” said Camacho.

Now the Islanders prepare to battle the unbeaten FD Friars on Friday after giving FD a nail-biting regular season battle.

“We are going to play our hearts out and play the same way if not harder than how we did when we played them in the regular season. We definitely have to come into the game more mentally ready.”