The Outlaws grabbed their second win of the GVFL season after dispatching the Island Chiefs Saturday afternoon. 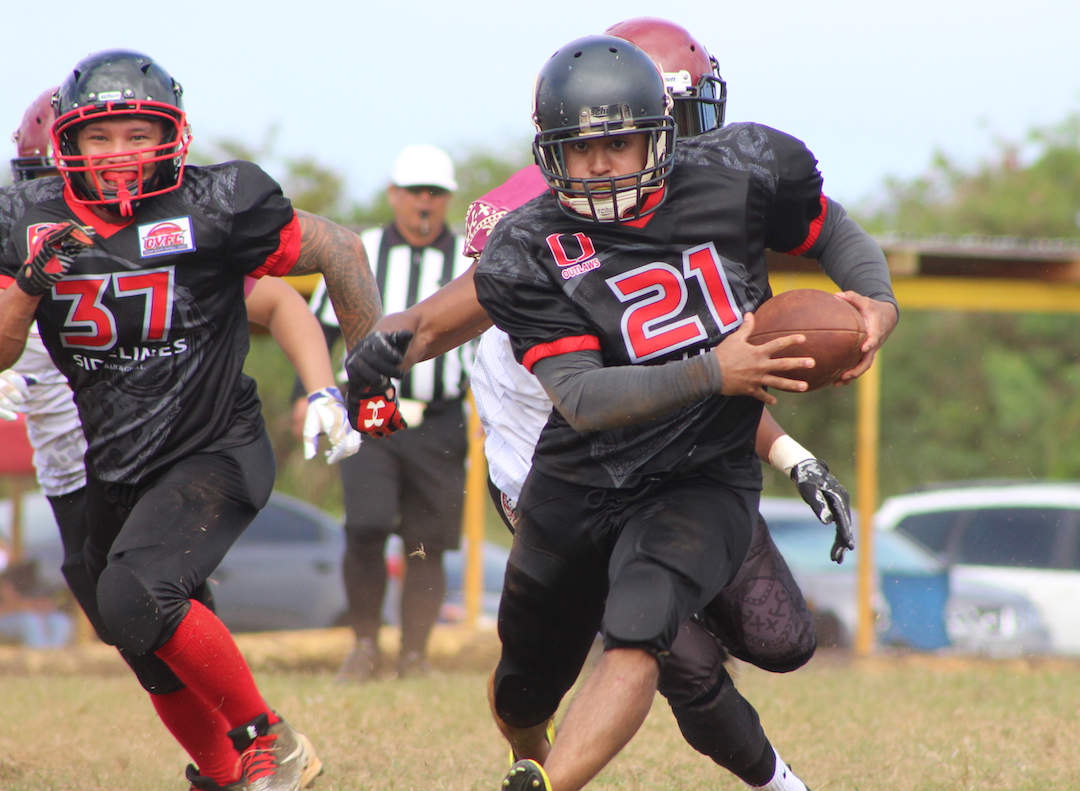 The Outlaws took on the Island Chiefs on a sunny Saturday afternoon at Eagles’ field in the Guam Varsity Football League (GVFL).

Coming into the second half with the score tied, the Outlaws were able to grab the lead on a 56-yard touchdown in the air from quarterback Daniel Phillips to wide receiver Quran Coleman, connecting for the second time of the day, propelling the Outlaws towards a 21-14 victory.

Both teams came out fired up, exhibiting hard-nosed football with strong, ground-and-pound run games and vicious defensive stops. With a fumble recovery on the chiefs’ 40-yard line in the 1st quarter, the Outlaws would find themselves in good field position and in good spirits as it would garner themselves some momentum.

After a few short gains, Jacob Flores would break free and take it to the house for the Outlaws on a 31-yard touchdown run, the only rushing touchdown of the game.

It wouldn’t take long for the Chiefs to answer back as they would get on the board on the ensuing possession off a 26-yard touchdown pass from dual-threat quarterback Daniel Dans to receiver John Pringle.

In the second quarter, the Chiefs looked to capitalize on good field position from another Outlaw Turnover. With his team in the hot seat, Dans scrambled away from pressure and was able to find an open receiver to grab another touchdown.

Outlaws quarterback Daniel Phillips goes through his progressions with the defense closing in. (photo by Robert Balajadia)

The Outlaw defense came up big on fourth down as they were able to make stand in the red zone to force a turnover on downs and get the ball back to their team on. Daniel Phillips and the Outlaw offense would go to work on their own 10-yard line and get a couple of big gains by both running back, Flores, and Phillips getting some yardage on the ground, himself, to put the Outlaws on their own 44-yard line.

On the next play, Phillips aired a deep 50-yard fade route to Coleman, who was able to able to make the grab and shake some defenders to make his way into the endzone and tie up the game 14-14 at the half.

“We saw that they had a couple gaps in their defense, and we figured out how to attack those gaps, the outlaw way,” said Coleman on making adjustments to find success in the air. “They were playing really tight, but when the balls in the air, I had to keep my composure and remain focused on making a catch”

In the next half, the Outlaws defense stayed hot as they were able to make yet another defensive stop and force another turnover on downs. The Outlaw offense took the ball up on the 44-yard line and would go to the air with Phillips hitting Coleman yet again for another 56-yard touchdown.

With their backs against the wall, the Chiefs started the fourth quarter out strong and continued to get good yardage but were unable to find the paydirt as the outlaw defense would lock them out and secure the win with a final score of 21-14.

The Outlaws will improve to a 3-1 record and will face the Raiders next weekend . Coleman and the Outlaws are looking to come out hard and make a statement in this highly anticipated matchup.

“At the end of the day, the end goal is to win, but we’re also looking to send a message that they might have beat us twice last season, but we are not the same team as last year and there are some new outlaws in town,” said Coleman.

The Outlaws celebrate their first score of the game after Jake Flores broke free for a touchdown. (photo by Robert Balajadia)

Quarterback Dan Daniels gets away from a sack. (photo by Robert Balajadia)

Outlaws Taylor Taitague gets some room to run by bouncing to the outside. (photo by Robert Balajadia)

The Island Chiefs get pumped before their showdown against the Outlaws.(photo by Robert Balajadia)