The Guam High Panthers overcame 21 penalties to avoid the upset against the Sanchez Sharks to escape with a 15-2 victory at the Okkodo Field in the IIAAG Football League. RaSean Jacobs saved the day for the Panthers, rushing for two touchdowns in the second half to improve to 3-2 for the season. 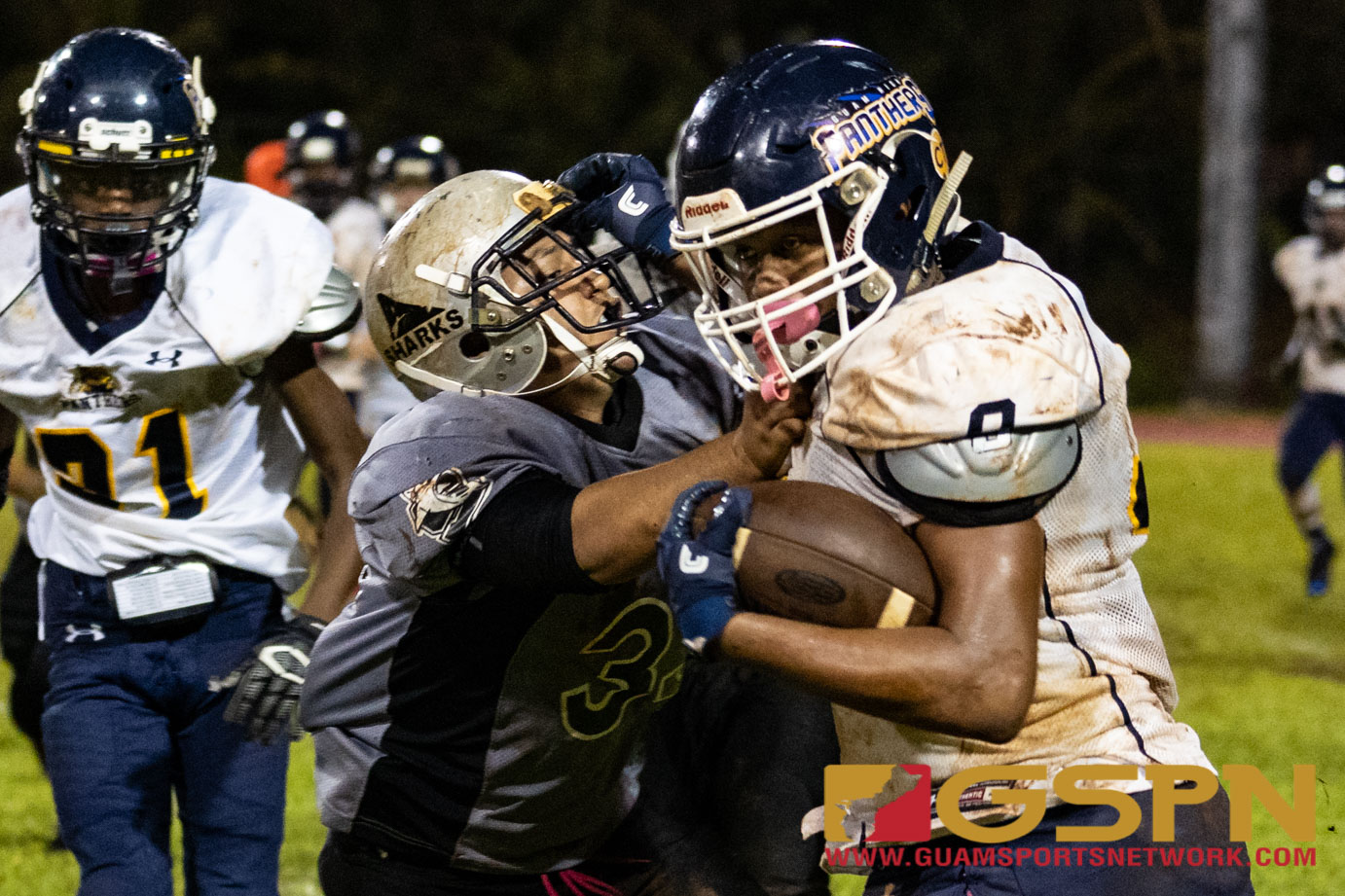 The Guam High Panthers overcame 21 penalties to avoid the upset against the Sanchez Sharks to escape with a 15-2 victory at the Okkodo Field in the IIAAG Football League. RaSean Jacobs saved the day for the Panthers, rushing for two touchdowns in the second half to improve to 3-2 for the season.

“We just made too many mistakes, that’s all on us,” said Jacobs. “Our line needs to work it out in practice so we can get better for the next game.”

A bulk of the penalties were either illegal blocks or holding which nullified big plays by Panther running backs Sincere Powell and Jeylyn Dowdell.

Wendy’s player of the game: RaSean Jacobs rushed for two touchdowns in the second half leading the Guam High Panthers to a win. (Photo by Michael Blas)

The Shark defense also played a factor in the first half with Harold Gaerlan halting a Panther drive in the first quarter with an interception to stop Guam High’s momentum. The Sharks returned possession back to the Panthers after failing to get a first down.

The Panther miscues drew them as far back as their own one yard line in the second quarter which enabled the Sharks to record a safety.  Jaden Evangelista and Peter Benito combined for a tackle on Powell in their own end zone to put the first points  of the game on the board.

It got nasty in the first half with a fight breaking out which caused more flags to fly and three players ejected, two from Sanchez and one from Guam High.

The Sharks entered the second half with a skeleton crew, but we’re motivated with the 2-0 lead. Running back Kamerin Toves grinded to move the chains for the Sharks but the offense was unable to get into the red zone.

The Panthers took over after a punt and also failed to advance the ball with flags flying against them. The Sharks muff the punt and are deep in their own territory. The Panthers come up with a huge play on defense with a fumble recovery by Ruben Ramirez to get possession on the Shark 11-yard line.

The Panthers go to Jacobs and he avoids a pair of tackles to score the first touchdown of the game. Brennan King converts the extra point to catapult the Panthers to 7-2 lead.

The Panthers grabbed possession back with an onside kick play executed by kicker Dowdell. The Panthers moved forward, but then back again after a few penalties and took possession heading into the fourth quarter. The Panthers continued to run the football and their drive finally ended with Jacobs scoring his second touchdown from eight yards out to lead 15-2.

The Panthers regained possession on the ensuing kickoff with another muffed kick by Dowdell. Another scramble ensued and the Sharks end up fumbling the ball with Ramirez recovering the ball once again.

The Panthers looked to score again, but their drive was cut short with Patrick Salas recording an interception. The Sharks looked exhausted and another injury causes head coach Jimmy Naholowaa to call the game with less than four minutes to play.

“We were trailing at halftime and coaches message to us was to just play. We weren’t playing football in the first half and he wanted us to play in the second half,” said Jacobs.

Jacobs had nine carries for 88 yards and two touchdowns for Guam High. Dowdell had seven carries for 32 yards; Travon Jacobs had five completed passes for 41 yards. Jalen Thach had three receptions for 25 yards.

The Panthers defense kept the Shark offense out of the end zone and allowed just 71 total yards. Evan Cavenall anchored the Panther defense with four total tackles (two tackles for losses) and a sack. Dowdell contributed four tackles on defense.

Kamerin Toves rushed 10 times for 43 yards, twin brother Kameo Toves rushed for 13 yards. Both brothers had four tackles each on defense. Jayton Penaflor had a game high seven tackles; Gavin Bejerana recorded five tackles for the Sharks. Gaerlan and Salas each had an interception for the Sharks who drop to 0-5 for the season.