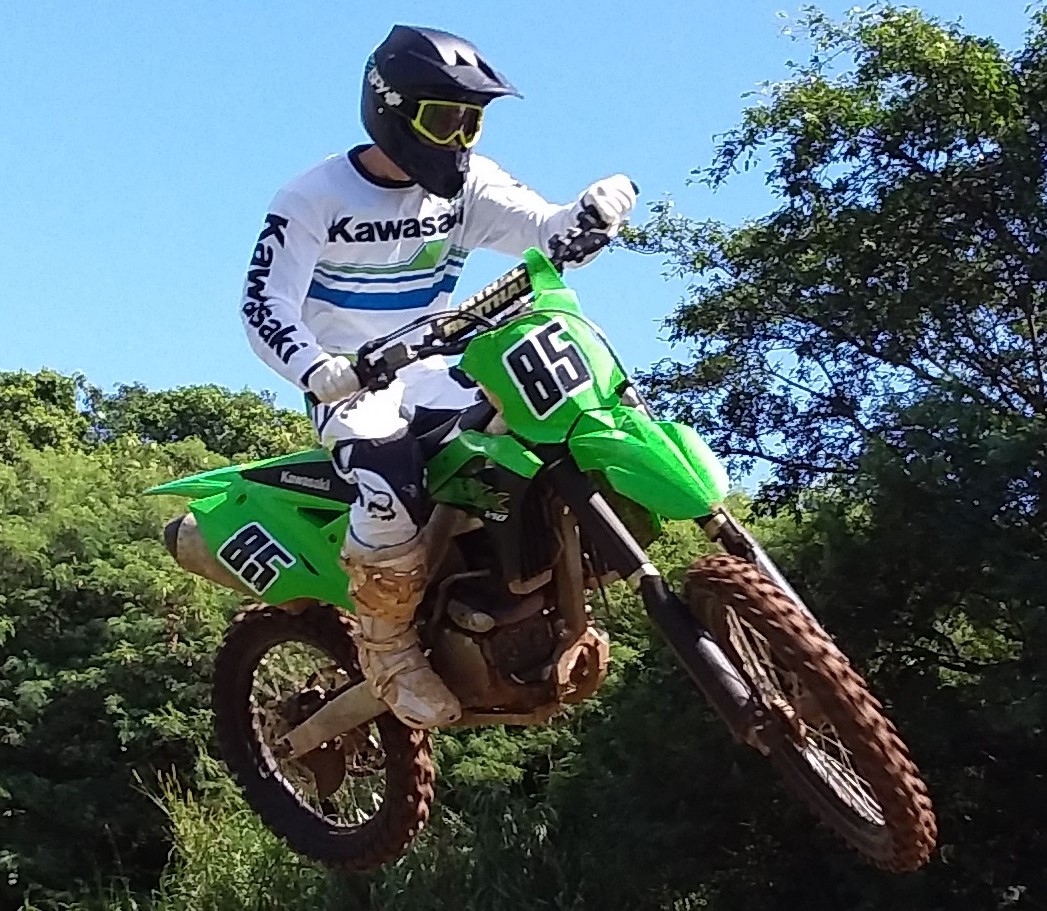 In appliance with the DPHSS 2021-29 guidance memo round 9 of the 10 round 2021 Monster Energy Guam Motocross Championships was held Sunday at the Guam International Raceway in Yigo. Racing kicked off at 9:45am with the days event schedule having been split into two sessions with the morning schedule dedicated just for all the kids mini bike and kids atv classes and the afternoon schedule therefore was just for the big bikes and atv’s.

This was to keep the number of competitors down in size throughout the entire day of competition rather than have all the classes inside the facility all at one time as was the regular schedule. The course had been reworked earlier in the week with several new features added and a complete redressing of the tough motocross layout. Mother nature was looking favorable on the days event with perfect conditions for a full day of high-flying racing in the dirt. Classes ranged from several sized kids minibike and atv classes along with a women’s minibike class also held in the morning up to the larger fuller sized machines of the open atv, schoolboy, novice, 250, 450, open and over 40 vet classes which all took over after lunch.

In heat one of two in the Open Motorcycle class #85 Blaze Aiken aboard a team Cycles Plus Kawasaki launched out from the gates to lead a thundering herd of hungry riders two of which were multi time Guam champions of the current points leader #1 Little Jon Aguon also aboard a Team Cycles Plus Kawasaki and a determined #7 JR Cepeda aboard a Yamaha. The #7 Yamaha of Cepeda had quickly moved into second having rocketed out of the first turn with Aguon on the Kawasaki glued to his rear wheel. The lead trio stayed the same all the way to the heat one checkers. With Aiken first, Cepeda second and Aguon in third.

Heat two was all the Yamaha of #7 JR Cepeda as he took his turn with capturing the hole shot lead off of the start. Cepeda was followed by Aiken in second and the intimating red #1 of Aguon in third rubbing tires as he diced and fought to try and get past Aiken and then hopefully challenge Cepeda for the win and the overall. Cepeda however took his Yamaha and went on to stretch out his lead over Aiken and Aguon leaving them to battle for second and third place scraps. At the checkers it was Cepeda with the heat two win and the round 9 overall win with Aguon just getting past Aiken for second earning a third overall for the round.  Aiken took third in the heat after going down which allowed Aguon to get past but Aiken still took a second overall for the round.

The rest of the field finished as follows

With just the final round to be held on Sunday November 28th the 2021 Monster Energy Guam Motocross Champion is still left to be determined in the Open Motorcycle class. The Kawasaki mounted Little Jon Aguon holds just a 21 point lead over the #7 Yamaha of JR Cepeda. The battle for the championship has come down to these two former champs making for an exciting finish to what has been a long hard fought 2021 motocross season.

In the 450 class Cycles Plus team rider #1 Lil Jon Aguon aboard a Kawasaki took the win with Kawasaki mounted #11 Mike Limtiaco in second, #98 Marshal Vawters on his Yamaha in third, and Ktm rider #75 Jeff Rios in fourth. Fifth place went to #49 Bong Rodam on his Yamaha and sixth was #19 Zachary Chang on a Ktm.

In the 250 class the Cycles Plus Yamaha rider #7 JR Cepeda took the win over second place finisher Cycles Plus Kawasaki rider #85 Blaze Aiken. Third went to #338 Jonathan Aguon on a Ktm. The rest of the field finished as follows

The 65cc Kids Minibike class had #18 Jonboy Aguon taking first on his Yamaha with second being taken by #2 Alize Mondia. #38 Travin Blaz was third. The rest of the field as follows

Up next on 2021 Monster Energy Guam Motocross Championship schedule will be round 10 the final round on Sunday November 28th to be held at the Guam International Raceway rt15 Yigo. Gates open at 7:30am in appliance with the DPHSS 2021-29 Guidance memo. Those interested in getting involved or are looking for more information can visit www.GIRMAC.Teamapp.com or contact Robert Bucek at 727-5381.