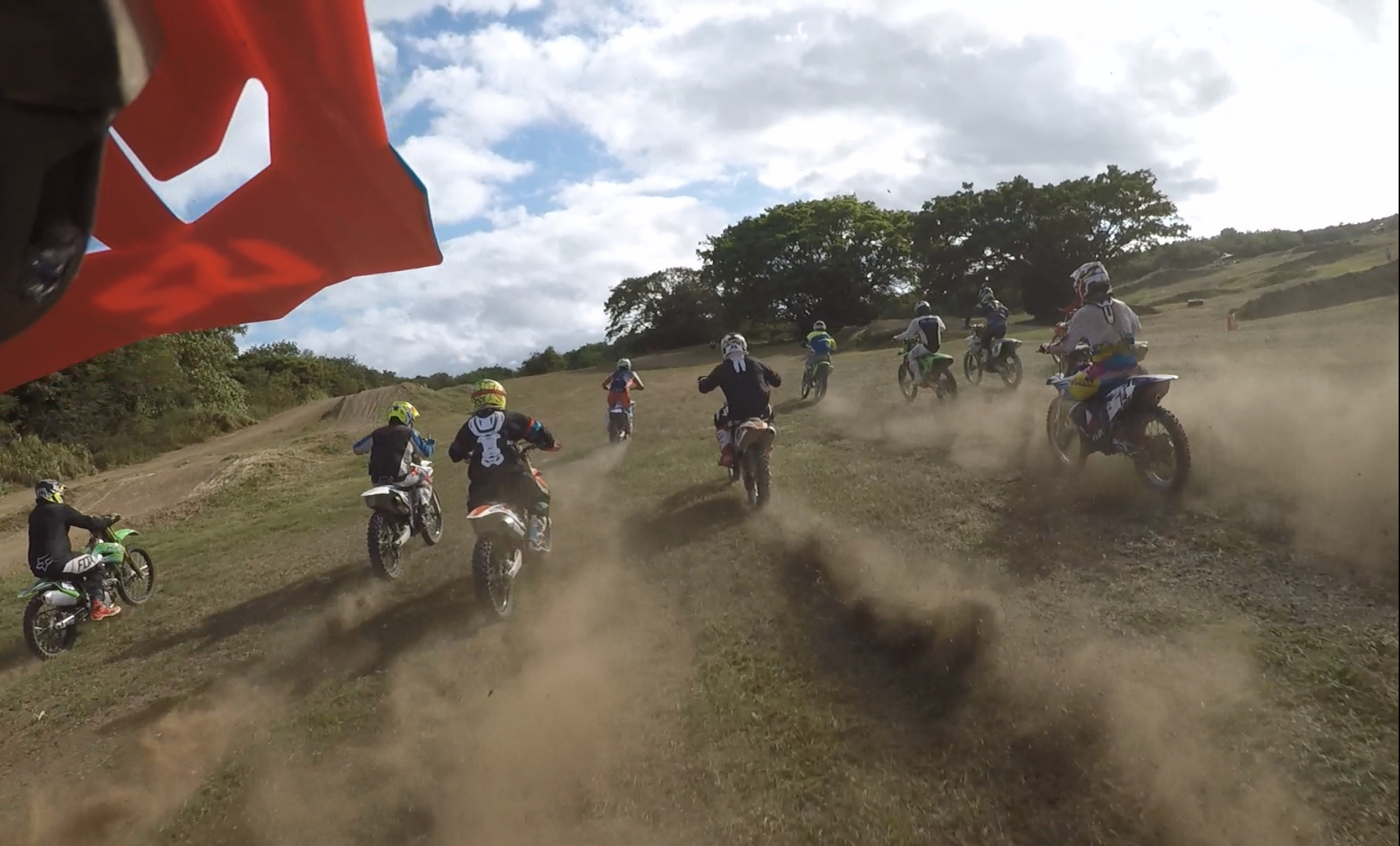 Round 3 of the 10 round 2021 Monster Energy Guam Motocross Championships was held this past Sunday at the Guam International Raceway in Yigo with covid19 safety protocols in place. Racing kicked off at 11:30am after a full morning of warm up practices that began at 8am. Classes ranged from several sized kids minibike and atv classes along with a women’s minibike class up to the larger fuller sized machines of the 250, 450, Open and Over 40 Vet classes.

Newly reintroduced was an Open Novice Motorcycle class for those riders who are newer to the sport of motocross. The track conditions were brutal on Sunday with dust being a key factor in negotiating the built up jumps that infest the nearly one and a half mile long course. Besides the harsh course the weather was although hot and sunny rather comfortable with a nice cool breeze that also lent to blowing the clouds of kicked up dust off sections of the course.

With two twenty minute plus one lap heats to determine a round three open Motorcycle class champion the hype coming into round 3 was all about who was going to challenge the dominance of #1 Little Jon Aguon and the powerful Cycles Plus Kawasaki 450. Aguon the defending champ had won the last four heats in a row taking the overall wins in both round one and two of the ten round championship.

The pre-race chatter had the #7 of JR Cepeda as the most likely candidate to put the challenge on and take the win from the dominating Aguon as he had been the only rider so far to have run at or near the same pace as Aguon having even led at times.  With the #7 Yamaha of JR Cepeda having been the only rider to have been close to beating Aguon it came as a surprise to many of those in attendance when the #85 Cycles Plus Kawasaki of Blaze Aiken jumped out to take the early lead with Cepeda in tow in second and Aguon stuck several positions behind after a poor start. Aikens and Cepeda were making it a show up front fighting it out for the lead with Cepeda eventually pushing by for the heat one win. Aikens took second with Aguon having placed third.

In the second and final heat the #1 machine of Aguon had returned to his usual form and was rocketing straight to the front of the field. Within a few opening laps Aguon had pulled away from the rest of his competitors leaving the #7 of Jr Cepeda and the #85 of Blaze Aikens to fight it out for second place. The fight for second was a heated one as Cepeda had his hands full of a hard charging Aikens. Aikens wasn’t holding anything back as he over jumped obstacles and threw his machine into the turns harder than anyone else in his challenge to get past Cepeda.  By midway into the second heat Aikens loaded up and and started blasting as he got by Cepeda who wasn’t going to be giving up and put on a charge of his own in an attempt to reclaim the second place position.

In the 450 class Cycles Plus team rider #1 Lil Jon Aguon aboard a Kawasaki took the win with #98 Marshal Vawters on his Yamaha in second. Third place went to #22 Shade Pitter on her Ktm with rest of the field finishing as follows.

In the 250 class Blaze Aikens aboard the Cycles Plus Kawasaki edged out the #7 Yamaha of JR Cepeda for first with #57 Kim Aiken in third. The rest of the field went as follows.

In the Open Kids Minibike class #25 Lawrence Limtiaco who was aboard the team Cycles Plus Kawasaki took first with #24 Isiah Salas taking second. #75 Jay Whitman aboard a Kawasaki placed third. Fourth place went to LG Racings #12 Jessani Leon Guerrero on her Kawasaki.

In the 150cc Kids class LG Racing #12 Jessani Leon Guerrero took the win aboard her Kawasaki.

The 65cc Kids Mini Bike class had  #18 Jonboy Aguon taking first on his Yamaha with second being taken by #6 Talon Diaz San Nicolas with #49 Daniel Salas in third. The rest of the field as follows

Up next on Sunday May 16th will be round 4 of the 2021 Monster Energy Guam Motocross Championships to be held at the Guam International Raceway rt15 Yigo. Gates open at 7am with practice to begin at 8am. Sign up and registration from 10am to 11am.

Riders mandatory safety meeting at 11am with racing set to begin at 11:30am.  Spectators are welcome but are required to follow the posted covid19 safety protocols. Those interested in getting involved or are looking for more information can visit www.GIRMAC.Teamapp.com or contact Robert Bucek at 727-5381.