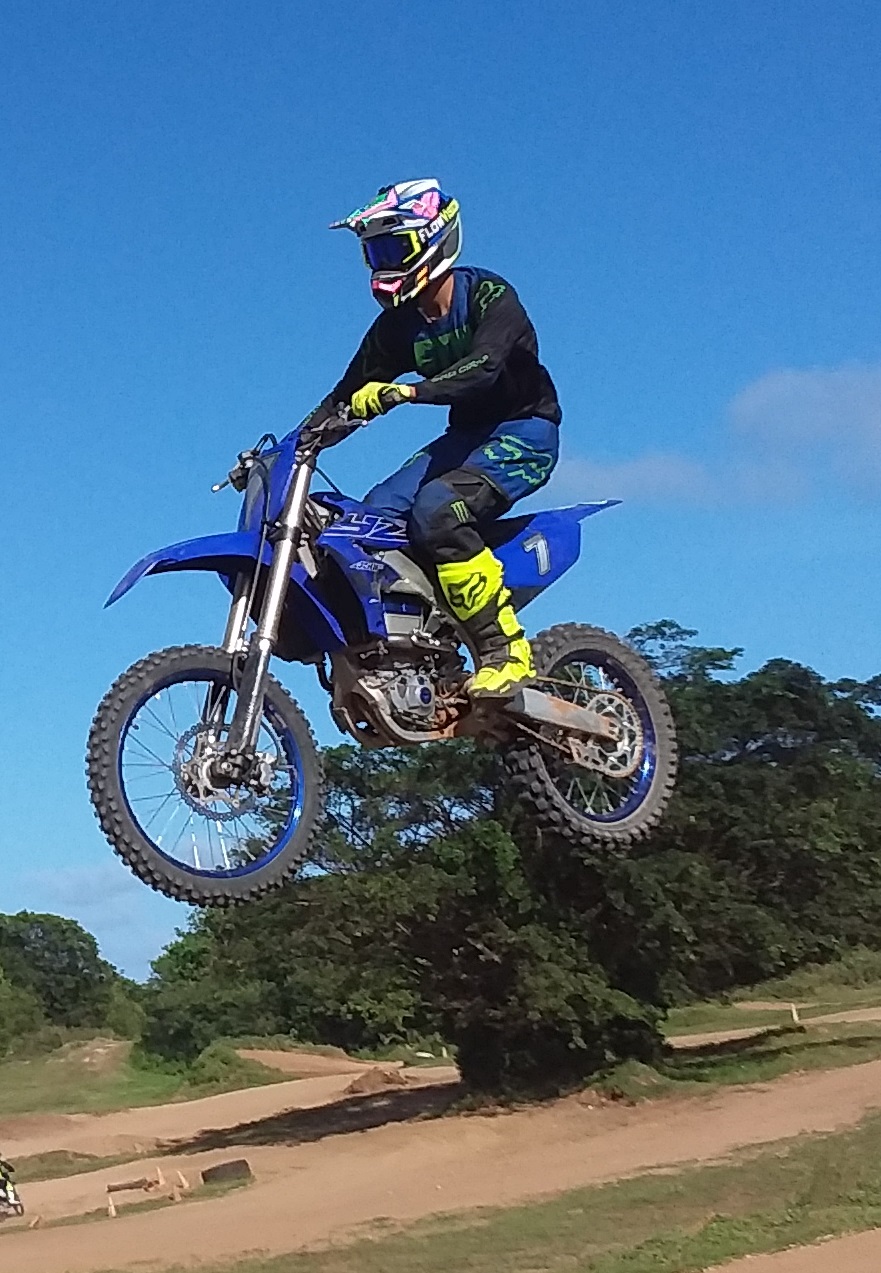 PRESS RELEASE – Round 4 of the 10 round 2022 Monster Energy Guam Motocross Championships was held this past Sunday at the Guam International Raceway in Yigo. Racing kicked off at 10 am with the morning schedule dedicated just for all the kid’s minibike and kids atv classes and the afternoon schedule set just for the big bikes and atv’s. Once again, the hard work from a few great motocross supporters such as Phillips and Sons, Fleet Services and Rocky Mountain Precast saw that the course was prepped and in excellent condition with several new high flying features having been added making for a full day of bar banging Monster Energy Guam championship motocross racing.

In the Open Motorcycle class #7 JR Cepeda aboard a Yamaha continued his winning heat streak by taking the round win wire to wire in both of the two scheduled round heats. Second place finisher was defending champion #1 Little Jon Aguon aboard his Team Cycles Plus Kawasaki followed closely by #85 Blaze Aiken aboard a Cycles Plus Kawasaki in third. The rest of the field finished as follows

After four of the ten rounds completed #7 JR Cepeda leads the championship Opan Motorcycle class points with 197 points over #1 Little Jon Aguon with a 179 points. #85 Blaze Aiken sits in third in the championships with160 points.

In the Open Atv class #2 Georgie Santos on a Kawasaki had been unstoppable having swept every heat win and totally dominating so far during the first three rounds of 2022. Round four seemed to be no different as the #2 of Santos took the lead in heat one on the second lap from the early leader #27 James Lujan on a Yamaha and then proceeded to pull away from the field.  With just three laps remaining the #2 of Santos was down with a mechanical issue and could not finish the heat. This allowed the #4 of defending champion Robert Bucek on a Cycles Plus Suzuki to inherit the lead and the eventual win. Heat two saw the now repaired #2 of George Santos back on the line and back out front. Santos left the field in his dust easily taking the second heat win. The #4 Cycles Plus Suzuki of Robert Bucek took second but with a first place finish in heat one and a second place in heat two was declared the overall round four winner.  Taking second  overall was the team Local Strains rider #27 Yamaha of James Lujan with #14 Suzuki mounted #14 Pierre Banes taking third overall. The rest of the field finishing as follows

In the Schoolboy/girl class Ktm mounted Local Strains team rider #10 Abraham Guerrero took the win in both heats. Taking second was #25 Lawrence Limtiaco on a Kawasaki with.#33 Mariana Wenden in third aboard a Ktm and team Local Strains #17 Isaiah Salas in fourth on a Yamaha.

After four of ten rounds completed #10 Abraham Guerrero leads the championship in the Schoolboy class with 194 points over #25 Lawrence Limtiaco with 182 points. Third in the championship points is #33 Mariana Wenden.

In the Open Minibike class #31 Richard Wenden on his Rocky Mountain Precast supported Ktm had yet another serious battle with last year’s 65cc champ #18 Jonathan Aguon aboard a Kawasaki now having moved up to the bigger and much faster Open Minibike class. Wenden after battling it out with Aguon to take the lead and was able to hold onto it until with just a few laps remaining he fell over allowing the rookie Aguon to take the heat one win. Wenden was able to remount but was unable to reel in the leader and settled for a heat one second.  Heat two saw the two of Wenden and Aguon again rubbing elbows and having a tight battle for the lead and the overall win. Wenden managed to keep his ktm up righted and took the heat two win. The rest of the field finished as follows

After four of the ten rounds completed #31 Richard Wenden leads the championship in the Kids Open Minibike class with 191 points over #18 Jon Boy Aguon with 185 points. Third in the championship points is #23 Jonaye Cruz with 142 points.

After four of the ten rounds completed #11 Mike Limtiaco lead the championship in the Over 40 Vet class with 72 points over his brother #25 Larry Limtiaco with 67 points. Third in the championship points is #75 Jeff Rios with 62 points.

After four of ten rounds completed #2 Alize Mondia leads the championship in the Kids 65cc class with 192 points over #3 Talen Diaz San Nicolas with 156 points. Third in the championship points is #24 Daniel Glen jr. Salas with 147 points.

After four of the ten rounds completed #108 Cannen Brooks leads the championship in the 50cc Kids Minibike class with 186 points over #1 Jeriah Guzman with 162 points. Third in the championship points is #3 Cason Brooks with 156 points.

After four of the ten rounds completed #18 Austin Quinata leads the championship in the Kids Mini Atv class with 194 points over #60 Troy Larance with 167 points. Third in the championship points is #24 Taiden Blaz with 107 points.

After four of the ten rounds completed #24 Rogen Nauta leads the championship in the Kids Mini Atv class with 186 points over #88 Giancarlo Lorenzo with 139 points. Third in the championship points is #6 Aria Zapatos with 126 points.

Up next on 2022 motocross schedule will be Round 4 of the ten round 2022 Monster Energy Guam Motocross Championships and will be held on Saturday June 11h  during the APL Fiesta Race weekend. Those interested in getting involved or are looking for more information can visit www.GIRMAC.Teamapp.com or contact Robert Bucek at 727-5381.