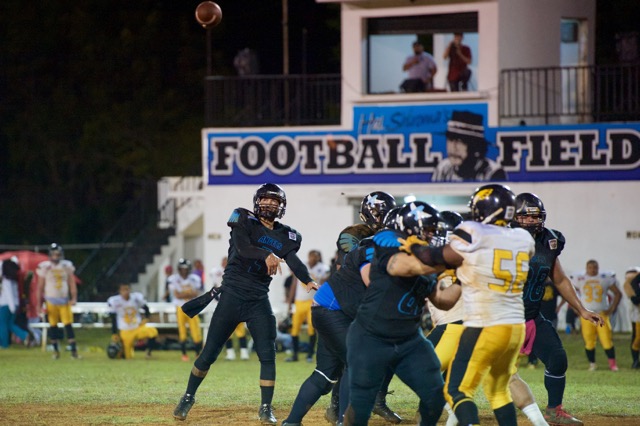 After a tough defensive battle in the first quarter, the teams’ offenses went to work in the second. The Eagles struck first when quarterback Daray “Gnarly” Davis threw a perfect pass to Kelvy Coney for an 87-yard touchdown. Coney was defended well by Angel cornerback Joel Limtiaco, but Davis’ pass was able to get around his outstretched arm and the speedy Coney was off to the races down the right sidelines.

The extra point attempt was blocked, leaving the score at 6-0. That lead wouldn’t last long though. On the ensuing Angels drive quarterback Steve “SP” Phillips evened the score when he linked up with Tyler Santos across the middle of the field for a 63-yard catch and run touchdown.

Miguel Novoa was able to convert the point-after-try to give the Angels a slim 7-6 lead heading in to the halftime intermission.

Scoring would cease after those two big plays and it wasn’t until the end of the third quarter that the Angels’ running back Brandon Whittaker put his team up for good on a two-yard dive on a 4th and goal play.

Whittaker was the workhorse all night for the Angels, picking up crucial yards despite facing a stout Eagles defense. Novoa went 2 for 2 on the PATs to help cushion the Angels lead, 14-0, heading into the final period.

In the previous two match-ups between these two teams, the Angels came from behind to beat the Eagles twice, with only a total of five points being the margin of victory. With less than a minute left, the Eagles had their chance at redemption, one last shot to try and tie the game.

Davis made a nice scramble and after a 15-yard penalty, the Eagles were in range for a last-second hail mary attempt. Davis’ pass sailed towards the end zone, but just like in their previous match-up, the Angels’ Chris Santos intercepted the ball and simultaneously ended the Eagles’ season.

The Budweiser Cup league championship game will take place on Saturday, February 6th at 7 pm. The game will be played under the bright lights of Hal Shiroma Memorial Field in Dededo.