The JFK Islanders made a huge statement Saturday night with another convincing win over a tough opponent. The Islanders came into Guam High’s home court and stole the show, winning 56-31 to remain tied atop of the Taga Division standings in the IIAAG Boys Basketball league. 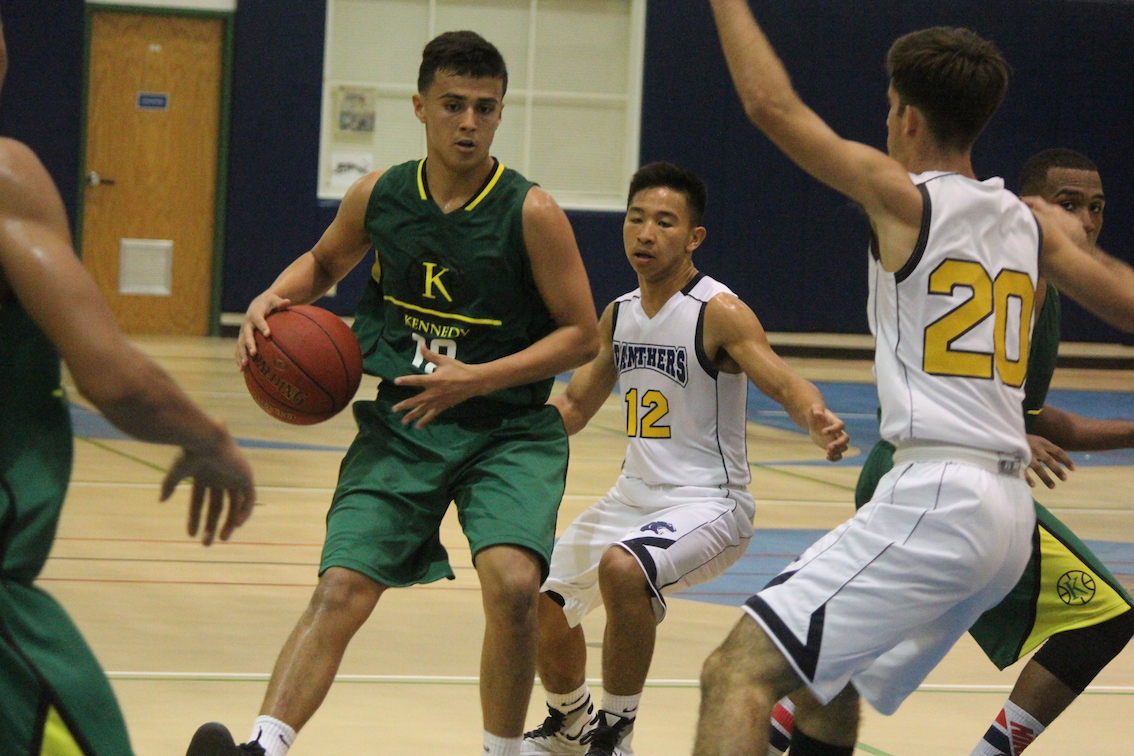 The JFK Islanders made a huge statement Saturday night with another convincing win over a tough opponent. The Islanders came into Guam High’s home court and stole the show, winning 56-31 to remain tied atop of the Taga Division standings in the IIAAG Boys Basketball league.

Senior Chris Conner had another monster game despite being heavily guarded by the Panthers’ Jujuan King. Conner had the game’s only double-double with 14 points and 14 rebounds to help his team improve to 5-1. The Islanders are tied with the St. John’s Knights who won their game against the Southern Dolphins 78-44.

The Panthers led 6-2 to open up the contest with Juan King Jr. hitting from 3-point land and Robert Kranz making a 10-foot jumper. The Islanders, not known for getting out to quick starts, slowly jabbed away at the Panther lead.

Billy Belger faked his defender and hit an open short jumper, he followed up on the next possession with a 3-pointer to give the Islanders a 9-8 advantage.

Alschea Grape entered the game off the bench and made an immediate impact, scoring on a pair of drives to put the Islanders ahead by 8 points in the second quarter.

Juan King Jr rallied the Panthers out of a potential double digit deficit and converted on a lay-in and made a 3-pointer to trail 27-23 at halftime.

Just as they did the evening prior against the Knights, the Islanders came out hot after halftime. Senior guard Aljurrell Grape continued to be aggressive in his drives and scored 5 points to start the Islander run. Nolan Chamberlain got a steal and went coast-to-coast for a lay-in to put the Islanders up by 10 points.

The momentum stayed in JFK’s favor with Belger and Conner scoring to push their lead to 20 points. The Panthers couldn’t buy a bucket in the second half, they were getting open looks but it just wasn’t falling for them at home.

The Panthers struggled from the field in the second half, scoring a season low 8 points in the final 24 minutes of regulation. The Panthers are now 3-3 for the season and dropped their second game in a row.

The King brothers accounted for 24 of the Panthers’ 31 points. Jujuan King had 10 points, 6 rebounds and 2 blocks, Juan Jr. scored 14 point to lead the Panthers. Kranz had 4 point and 10 rebounds.

The Panthers did a good job on the glass but had a rough shooting night making 14-of-87 shots for a dismal 16 percent from the field.

Wendy’s players of the game Chris Conner and Aljurrell Grape lead the Islanders over the Panthers.

The Islander junior varsity team got another lopsided win, defeating the Panthers 73-49. Ruedel Galang led the way again for the Islanders with 23 points, Isaac Ventura from the Panthers scored 20 points.

The junior varsity Islanders are now 5-0 and will meet the FD Friars next Tuesday in a battle of undefeated JV teams. The Islanders have won every game they played by 24 points or more and have yet to be tested. The Friars went undefeated last season and are the defending JV champions under coach Jimmy Yi.

Junior varsity games do not go into playoffs, the champion is declared with the best record at the end of the season. With the Friars and the Islanders playing in two different divisions, this will be their only meeting this season. Their game on Tuesday could very well be a “championship game” pending an upset loss in the second half of the season.

Galang said his team will be going into their contest very confident. “Our coach has emphasized good defense and that is our game plan going into the game. I see the outcome of us winning (on Tuesday) based on the fact that we beat these guys (Panthers) by that much,” said Galang.

Other Varsity games
The Friars, the only varsity undefeated team left in the IIAAG league, defeated the Harvest Eagles 39-33. The Friars (6-0) had a hard time against the Eagles (1-5) who upset the Islanders earlier in the week. The Eagles led by four points at half time.

The Okkodo Bulldogs improved to 3-3 after defeating the GW Geckos 70-62 on their home court. Aiden Ferrera and Liann Torres led the Bulldogs in scoring with 20 and 17 points, respectively. The Bulldogs got back-to-back wins after the controversial loss against St Pauls on Tuesday.