Finally, the Titans have a home-court of their own. The highly anticipated Tiyan Gym is now open and the first game was played in the IIAAG boys basketball season opener Tuesday night vs. the FD Friars. 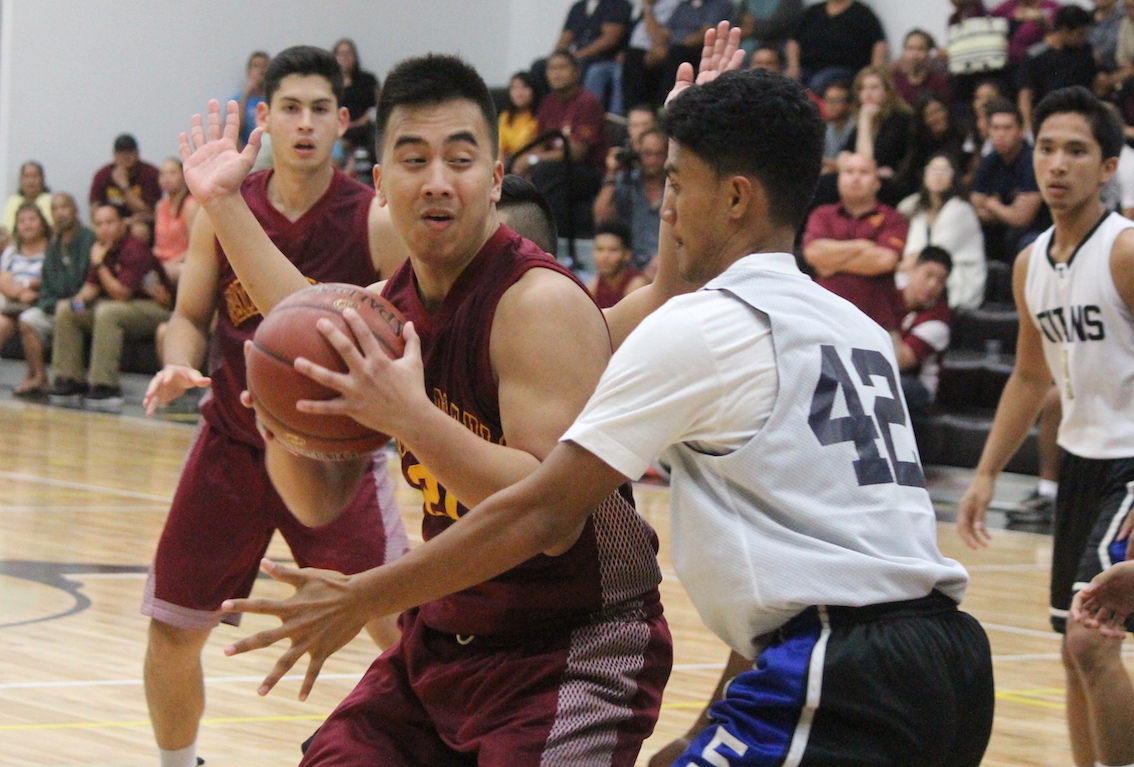 Finally, the Titans have a home-court of their own.

The highly anticipated Tiyan Gym is now open and the first game was played in the IIAAG boys basketball season opener Tuesday night vs. the FD Friars.

The floors were shiny and the smell of fresh paint still lingered in the air of the well lit gymnasium as the home team Titans took the court. The junior varsity game precluded the varsity contest with FD spoiling the school’s inaugural game in a pair of blowouts against Guam’s newest school.

Cyril Concepcion, the Titans’ varsity head coach, said it felt good to finally play at home on their campus after playing home games at GW or the Guam Sports Complex.

“First of all it feels great. Having our own home games will give us ownership to our team. We’ve developed a culture; every time we step on or off the court, we gather at the center circle,” said Concepcion.

“As far as our first game goes, it’s a work in progress and we are learning everyday to get better,” said Concepcion.

With just a few years in existence, the Titans have a young team.

“These boys are working really hard and we are looking to get better as the season progresses,” said Concepcion.

The Friars, having played two preseason tournaments, had a huge jump start against the Titans who have yet to order complete team uniforms. The Friars spoiled the inaugural Titan game, winning 64-28.

Roy Taimanglo led the offense for the Friars scoring 16 points. Taimanglo was impressed with the new gym and said it was unique. “When I first walked in I was impressed because it was an awesome gym. It’s nice with the black floors, I don’t think any other gym has a floor like that,” said Taimanglo.

Taimanglo led the charge in huge second and third quarter scoring spurts before sitting in the final period. Taimanglo made 8-of-12 field goals and committed no turnovers. Friar sophomore Tomas Calvo made the Friars’ only three-pointer scoring 11 points for the Friars.

The new Titans center-court piece in their first game in their historic new gymnasium. (photo by Robert Balajadia)

Friar point guard Josh Paulino played quarterback and dished out a game high 5 assists and recorded 3 steals. “It was a good opening game win, but we still have a lot of work to do. There is still room for improvement, we have to continue to work hard and practice,” said Paulino.

The Friar defense forced the Titans to shoot just 25 percent from the field. Johnsey Hagel led the Titans with 10 points, Ryan Soulik had 6 points and a game high 10 rebounds. Soulik, a GSPN all-star last season, was limited with foul trouble.

Jayjay Libao and Christian Usana each scored 5 points for the Titans who will face the ND Royals in their next game at ND. The Royals pulled off the 59-51 upset victory over the preseason champion GW Geckos in opening night. The Friars will host the Southern High Dolphins on Friday.

The Titans new look logo with their school colors headline each baseline. (photo by Robert Balajadia)

Titans Franklin Taijeron looks for an open teammate as he drives baseline. (photo by Robert Balajadia)

All-Star Titan returnee Ryan Soulik is back to lead the young Titans. (photo by Robert Balajadia)

Titan returnee Johnsey Hagel is met by a tough Friar defense as he sets up his offense. (photo by Robert Balajadia)