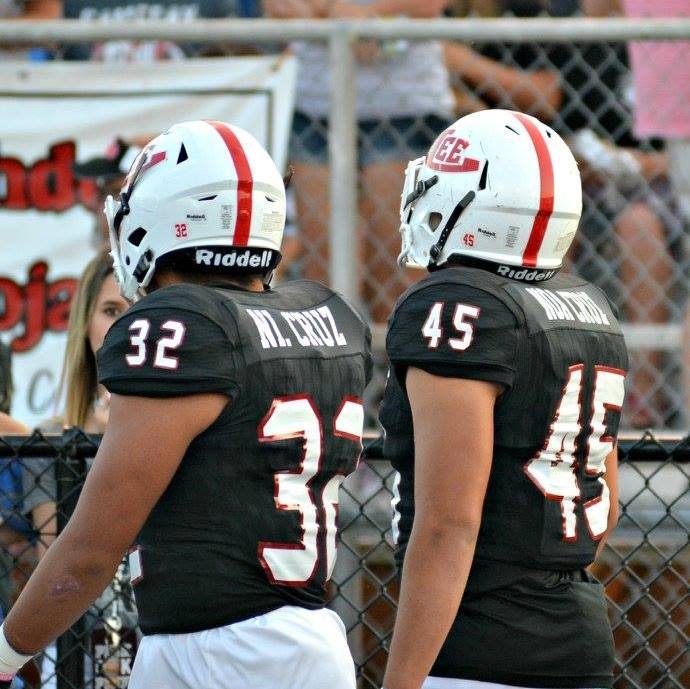 Nikko and Noa Cruz will suit up for the Lee County Trojans this Friday at 7:30 PM (10:30 AM GST Saturday). Nikko is a starting senior fullback and Noa is a junior linebacker. They are the sons of Daniel and Virginia Cruz. Daniel is a Yigo native and is known on island for starting the first pop warner league in Georgia in 2010. He played for Hal Shiroma’s Angels and Sanchez Sharks as a youth. He visited Guam in 2013.

Nikko, Noa, and younger brother Boom have played for the Lee County Warriors coached by Daniel. Nikko’s warrior teammates are currently playing on the Trojans team. Nikko has been playing on varsity since his sophomore year. His senior year has been one to remember.

Cruz received more carries this season. He made the Region I first team and has averaged over 100 yards per game in the playoffs. He currently has two offers to play football for NAIA programs in Missouri. Noa is part of the rotation of talented linebackers and is coming off an ankle injury. Both will be suited up to play for the championship.

The Trojans have had an eventful December. First, they hosted the state semifinal on December 1st against the Glynn Academy. At one point, the Trojans were down 31 to 6 on their home field. They never gave up and rallied to win 42 to 38. Nikko scored a TD in a winning effort. The Trojans were expecting to play last Friday at the Mercedes Benz Stadium in Atlanta for the title. However, games were canceled due to a heavy snow storm.

The Cruz family and fans were disappointed because of charter buses and hotels were paid in advance. However, the Trojans have a championship to win as they will host Region I rival Coffee High. The Cruz brothers are proud of their Chamorro heritage. Nikko has carried the flag during games and Daniel uses the latte stone as part of the Lee County Warriors designs. Go win state boys!