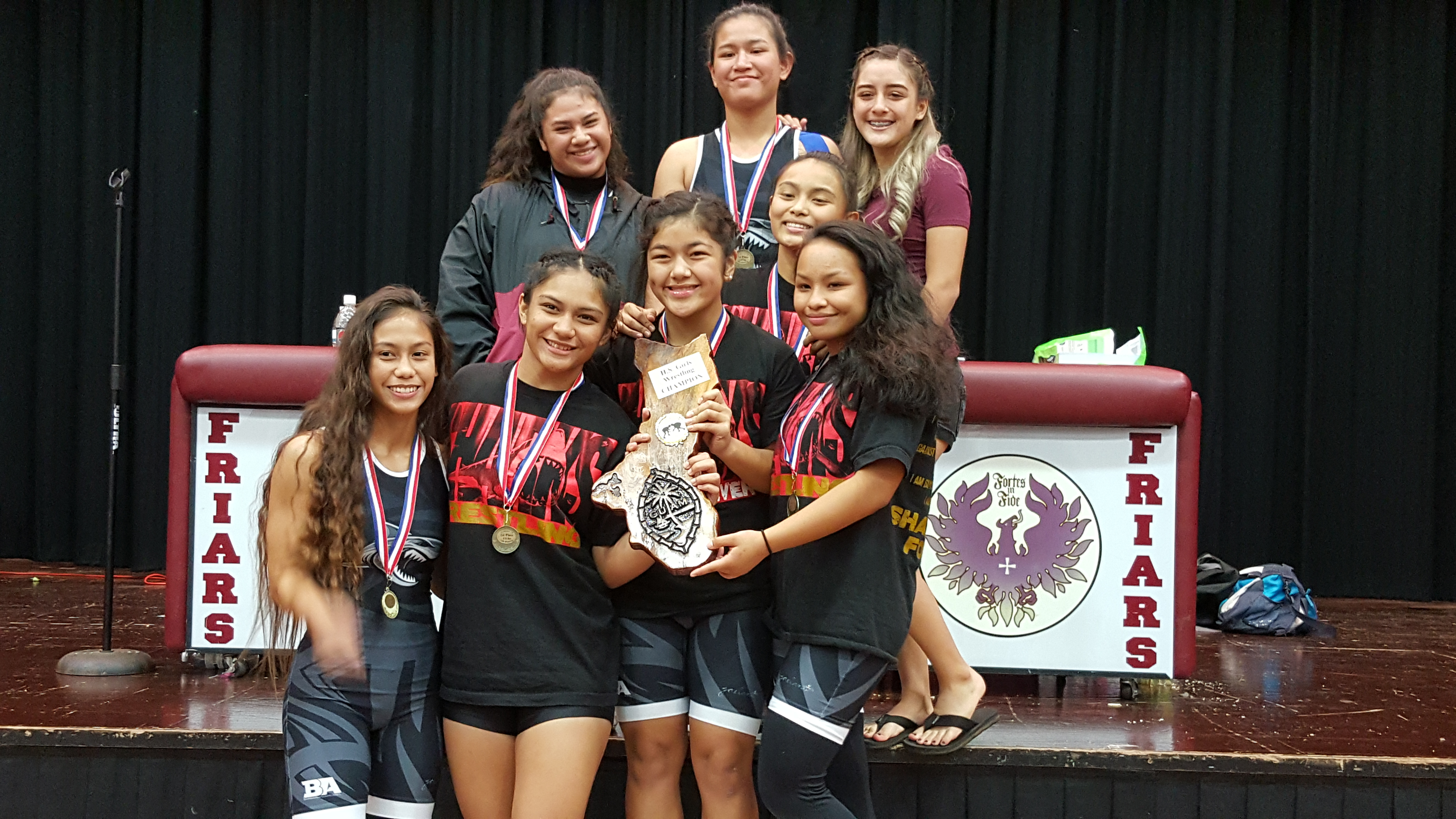 Quality over quantity was what the Sharks bring to the mats every meet according to 132-pound sophomore Kaetlyn Quintanilla.

“Academy (FD girl’s wrestling team) has more girls wrestling than we do and we were behind at first. But we did what we usually do in our matches and come up with pins,” said Quintanilla.

Quintanilla won an exciting match over Southern High’s Jayann Andrews in the 132-lbs division via pinfall in the second round. “It wasn’t easy, we worked really hard.”

The victory is the second gold medal for Quintanilla after winning a gold medal last season as a freshman.

Chloe Quidachay from the Sharks clinched the title in a clutch 12-second quick pin over Guam High’s Samantha Franchino in the 184-lbs division. Franchino was undefeated going into the contest and Quidachay needed to get a victory to give valuable points to the Sharks to help preserve the dynasty. The win was important because the Sharks edged out the FD Girls team by just 9 points. Quidachay’s quick pin was the fastest of the tournament.

Quidachay got the crowd cheering after she managed to catch Franchino by surprise with a throw and quickly covering her up for the pin.

“I honestly didn’t have a strategy against my opponent. I saw an opening and I went for it,” said Quidachay after the match.

Shark teammates quickly surrounded Quidachay with hugs and high-5s after the match. The Sharks had 124 points after Quidachay’s match, finishing just in front of the FD Girls team who had 115 points.

“Our coaches really deserve alot of the credit. They trained us really hard in practice,” said Quidachay. “I don’t think we would have accomplished anything without our coaches. They train us to be the best, I love the way all our coaches help us,” said Quintanilla.

The Sharks are led by head coach Tony Aquino and staff of several volunteer coaches.

Basto had a double celebration after achieving her first gold medal and also celebrating her 16th birthday. “I’m also so happy we did so well as a team this year. This is my first year wrestling and I didn’t really expect to win a gold medal but we worked so hard” said Basto.

“It feels really good to win a gold medal and contribute points to my team. It was a challenge, it wasn’t easy for me to win my match,” said Lujan.

The Sanchez Sharks pose with ‘6’ fingers up to celebrate their 6th title. (photo by Jay Leon Guerrero)