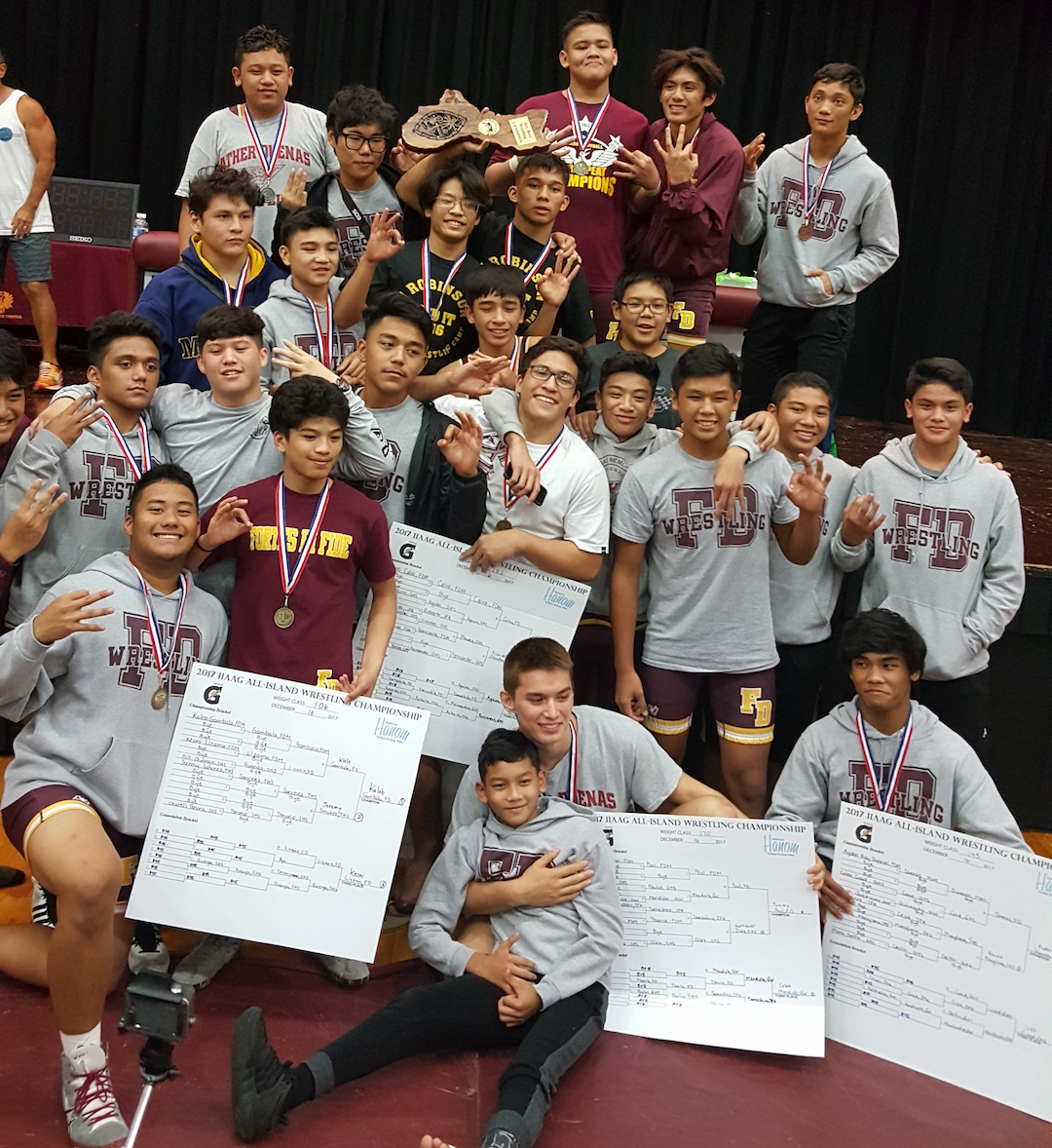 The Friars have not lost a team meet in over a span of 30 meets and they were not intending to break their streak during the 2017 All-Island Wrestling championships on their home gym. Guided by head coach Terry Debold, the Friars had 10 wrestlers enter the gold medal matches. Eight of the Ten Friars won gold medals to contribute valuable team points to run away with team championship.

After eight hours of wrestling at the Phoenix Center, the Friars managed to score 250 points. The Sanchez Sharks finished second with 128 points; Southern High finished third with 117 points.

Here are the official team scores based on trackwrestling.com results:

“I’m very happy with the results and proud of how the team performed today. We’ve been training hard all year and our coaches put it in our mind that we can compete with the best on this Island,” said FD’s 182-lbs gold medallist Matias Calvo. After accomplishing a bronze medal in his sophomore year, Calvo went undefeated and earned his first all-island Gold Medal.

FD team captain Devon Garrido won via pin in the 126-lbs weight division. “I think we exceeded our expectations this year. We wanted to develop new wrestlers and get as many wrestlers as possible into the medal rounds,” said Garrido.

Garrido was happy that 10 total Friars made the gold medal rounds but he was also happy that the team as a unit showed dignity and respect.

“One of our main goals was to better ourselves on and off the mat and I really think that we did that today.”

The Sanchez Sharks managed to accomplish second place despite having one of the smallest teams in the league. Paul Aguon won gold in the 152- lbs division defeating Friar Liam McManus for his second straight all-island gold medal.

Aguon went undefeated for the season and said his team performed well despite not being able to fill in all the weight divisions.

“We are not even supposed to be near them (FD) in points but we ended up pushing and scoring well,” said Aguon. Aguon, along with Lynch Santos (132 lbs), JunJun Asebias (138 lbs), Javier Rodriguez (160 lbs), and Hansen Ignacio (220 lbs) all ended up winning gold medals for the Sharks to finish a respectable second place.

In one of the highlight matches of the tournament, Tiyan’s Lance Galarpe won his school’s only gold medal with an upset victory over Sanchez wrestler Gavin Whitt in the 113 lbs division. Galarpe won via points after three rounds, taking an early lead and hanging on for the victory which got the Tiyan fans roaring on their section of the bleachers.

“After seeing alot of my teammates lose in the early rounds, I felt I had to get that gold for the boys,” said Galarpe.

Here are the results from the gold medal matches: