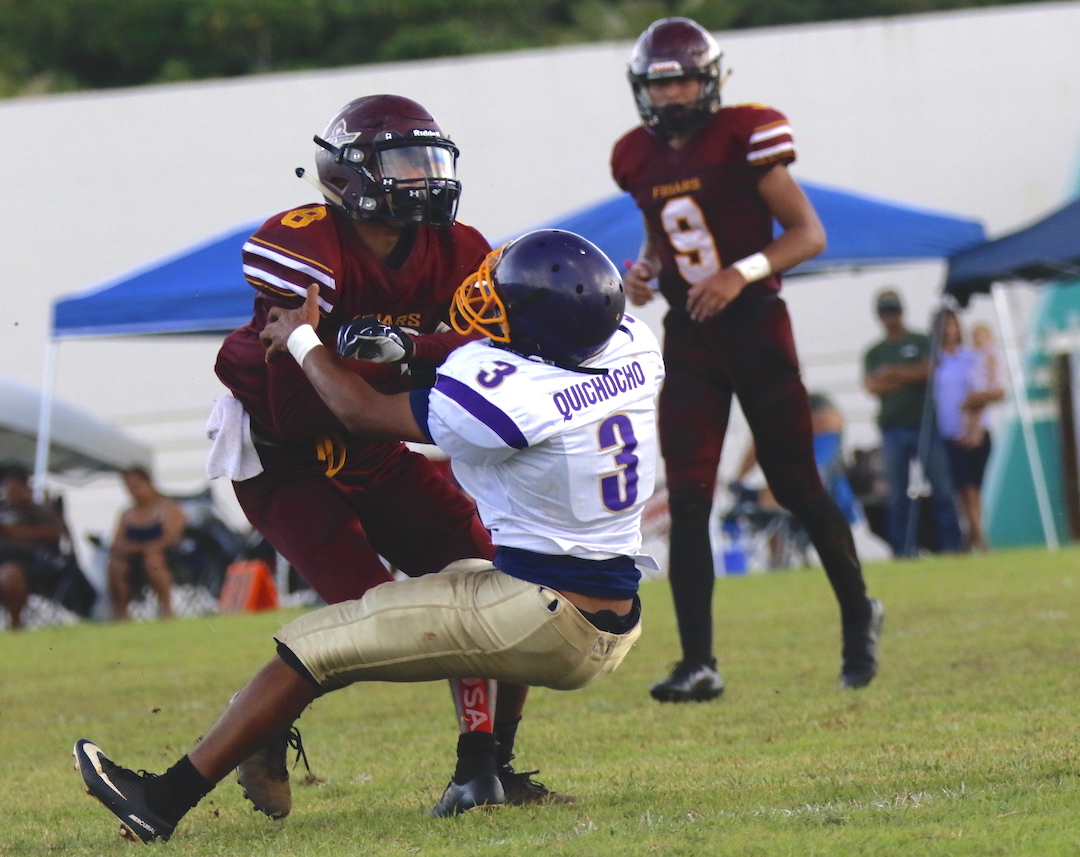 The FD Friars made high school football history by winning their 27th straight game, a 32-0 shutout over the GW Geckos Saturday afternoon at the UOG Field.

Ironically, it was the GW Geckos that held that mark of 26 straight from 1987-1989 and it were the Friars who stopped the Geckos’ 26-game streak back in 1990. Twenty seven years later, FD breaks the mark. Another ironic note is that the Friars last loss was to the Geckos in the 2014 championship game to add further history to Guam’s most storied football rivalry.

FD has been in total domination mode this season, finishing the regular season at 7-0 and outscoring the league 299-6! The Tiyan Titans were the lone team to score on FD in Week 2.

Friars running back De’Aundre Cruz totalled 136 yards off 18 carries and two touchdowns, his most hefty workload this season.

Cruz has been on the team for each of the 27 wins, losing just once in the 2014 title game to the Geckos.

“It’s a great feeling,” said Cruz on being the winningest football team in Guam high school history. “After losing the title in 2014 I never wanted to experience that feeling again. Our coaching staff often makes reference to that game because that’s the one that hurt the most.”

As sharp as Cruz and the offense have been in the 27-game streak, the defense has looked just as dominant. Defensive back Brandon Kinsella has been playing on the Friars defense in each of the wins and setting a new win-record is something the team can collectively be proud of.

“It’s a great honor and there’s not many better feelings. All the hard work is paying off, but we still want to finish this season with a championship, that’s the goal,” said Kinsella.

“We stuck to the game plan and everything our coaches have been preaching. We trusted our coaches and listened to all their coverage assignments,” said Kinsella on tracking Jamanila.

“I had to get mentally prepared for the day. I had to be physical with him from the start,” said Diaz on the coverage.

The Geckos came out hot right on the opening kickoff, bringing the ball from their own 30-yard line. Quarterback Ricky Macias connected with Jamanila for 11 yards and a 1st down, showing flashes of the dangerous passing game the Geckos have developed. Another 1st down run put the Geckos in Friar territory, but the FDdefense began to buckle down.

A quick three-and-out gave FD their first offensive possession, which they turned into a 23-yard Cruz touchdown. A botched PAT turned into a failed 2-point attempt. Their second offensive series ended in a 29-yard missed field goal from sure-kicker Giancarlo Abril, leaving the score 6-0 FD after one quarter.

Macias struggled finding his targets, in large part to the Friar blanket coverage. Their fourth straight three-and-out allowed the Friars to find their offensive groove.

A run-dominated drive early in the 2nd quarter ending in the Friars second score, a 5-yard punch in from Kai Akimoto, but missed PAT from Abril had FD up 12-0. A big interception from linebacker Eugene Arriola on the following Gecko drive translated into another Friar score, a 34-yard touch pass to Naputi, who had Jamanila shadowing him on the out route. Under pressure, Phillips laid a perfect pass into the hands of the streaking Naputi with Jamanila just a half step behind.

This was Naputi’s first meeting with his former Geckos teammates since joining the Friars for his senior season. Abril’s second missed PAT gave the Friars an 18-0 halftime lead.

The Friars were stuffed on their first drive of the second half with Phillips taking a 19-yard sack that put them 4th and forget about it. The Gecko defense started to bring the pressure, sacking Phillips for another chunk-yardage as FD turned to their run game.

Cruz took control, racking up big gains of 18 and 19 yards before punching in a 4-yard score.

The Friars added their final blow on a 65-yard pass to Aflague down the left sidelines for the final score 32-0 after Abril’s second consecutive made PAT.

Friar Xavier Naputi breaks away from coverage for a 34-yard score. (photo by Vince Delgado)