FRIARS RAIN DOWN ON PANTHERS IN MUDDY MORNING

Rainy weather has been a theme for Guam over the past few days, but the dampening weather didn’t slow down the FD Friars as they dispatched the Guam High Panthers 30-0 at the UOG Field Saturday morning. 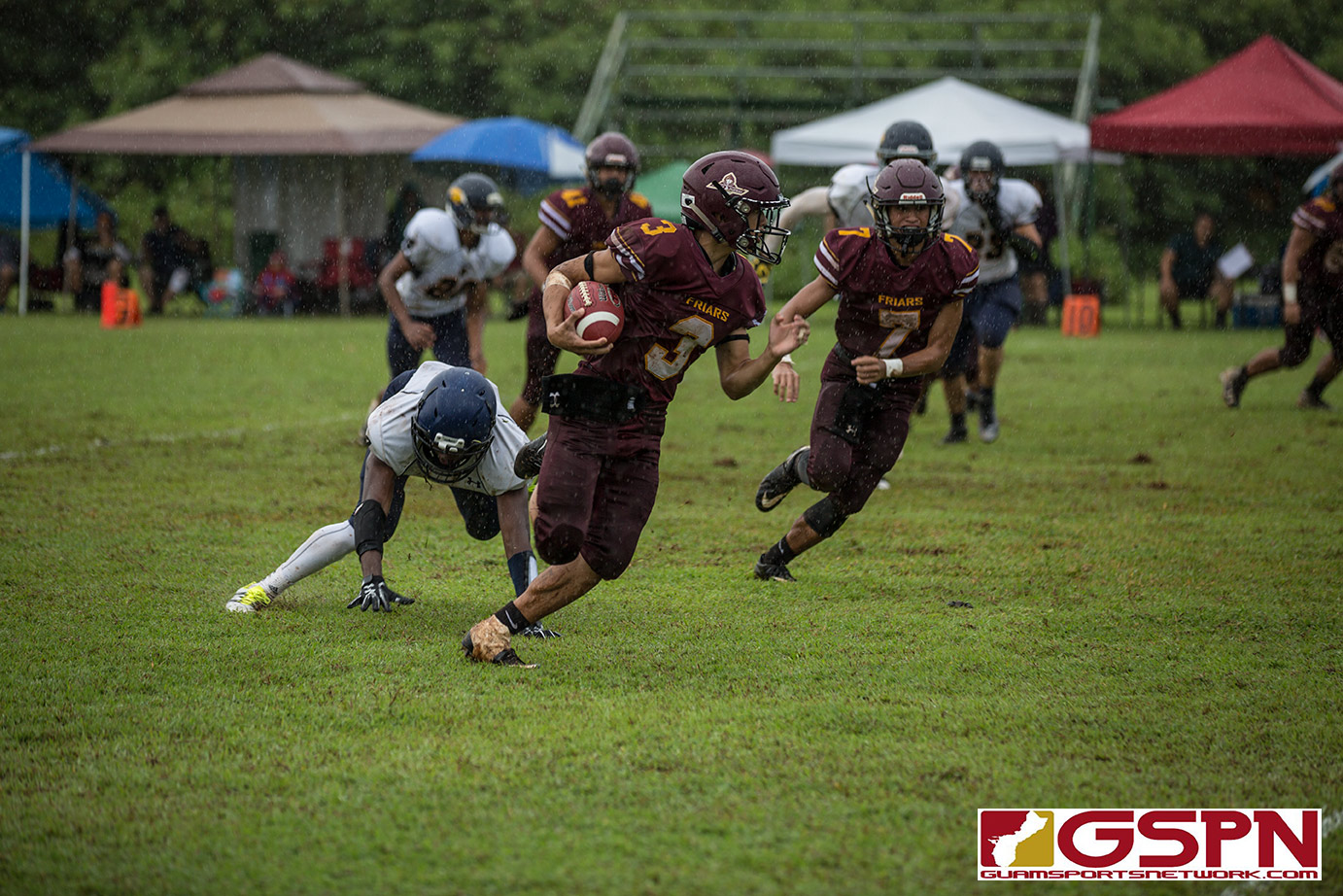 Rainy weather has been a theme for Guam over the past few days, but the dampening weather didn’t slow down the FD Friars as they dispatched the Guam High Panthers 30-0 at the UOG Field Saturday morning.

FD churned out 243 yards on the ground in their first outing at the their 2017 Home Field wth running back De’Aundre Cruz totalling 177 to go along with three touchdowns. Cruz had a 55-yard touchdown run negated in the 1st quarter with the Friar running game setting the tone for the morning.

A stellar ground attack supplied the points, but the Friar defense didn’t allow the Panthers any breathing room, suffocating the Guam High offense into (-13) yards on the day.

The Friars posted a 23-0 halftime lead with the officials keeping the second half on a running clock.

Guam High’s best drive came in the 3rd quarter where the Friars were tagged with two pass interference penalties on 3rd down, allowing the Panthers inside the red zone for the first time all game.

While in the red zone, Panther quarterback RaSean Jacobs used a quarterback keeper on an option play to pick up 15 yards, the longest play for the Panthers on the day. Two running tries of the same play couldn’t get Guam High into the end zone, when they elected to throw on 3rd down.

Friar defensive end Isiah Reyes wasn’t having it, sacking Jacobs for an 11-yard loss, one of FD’s four team sacks of the game. Friar defensive back Brandon Kinsella then plucked away a short pass from Jacobs on the next play, ending the Panthers red zone trip on an interception.

Cruz scored all of his touchdowns in the first half and Friar receiver Xavier Naputi had a light work load with two catches for 33 yards and one touchdown. The dangerous return man Naputi wasn’t given the chance at a return all game with the Panther special teams steering clear of kicking to Naputi or Noah Diaz.

FD’s young explosive runner Kein Artero took his only carry of the game for 57 yards before leaving with an injury. Artero tried to work out his injury on the sideline after landing awkwardly after being tackled, but the nagging issue forced the young star to leave the sidelines to further assess the issue.

The Friars improve to (3-0) on the season while the Panthers (1-2) drop in back-to-back weeks since picking up a win on opening night.