The Okkodo Bulldogs earned their first win on their home field Friday evening where they beat the Southern Dolphins 21-18 in a thrilling IIAAG Football matchup. 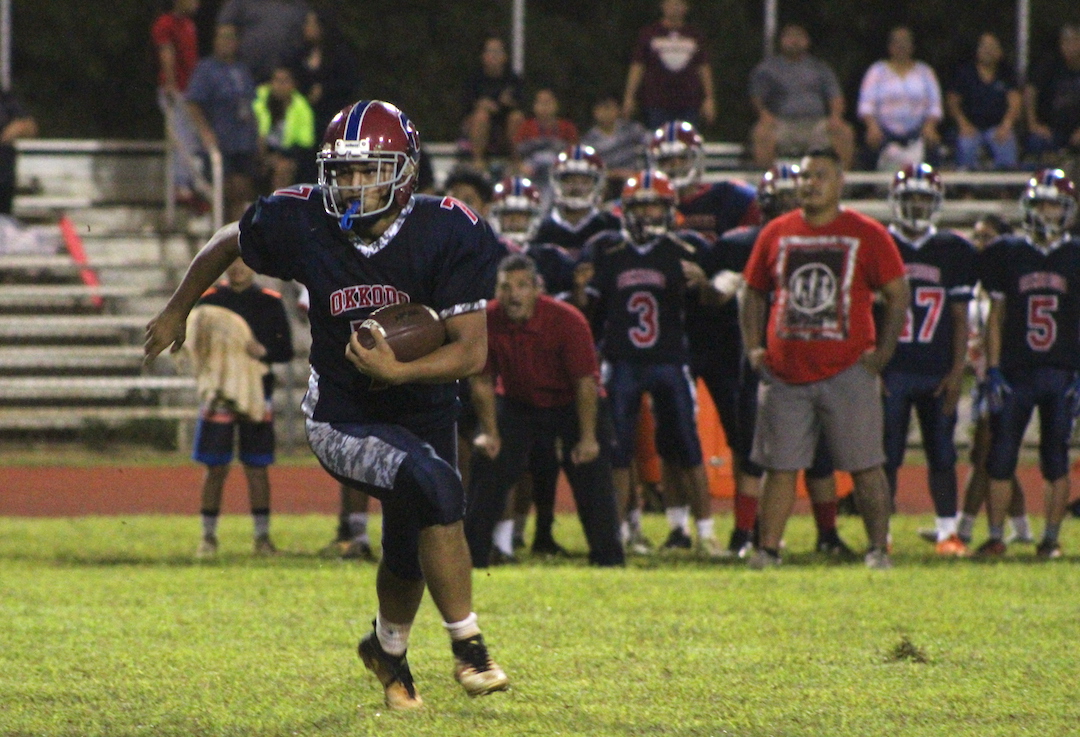 The Okkodo Bulldogs earned their first win on their home field Friday evening where they beat the Southern Dolphins 21-18 in a thrilling IIAAG Football matchup.

Both the Dolphins and Bulldogs played hungry for a win after the two suffered from tough, one-sided early season losses coming into the ball game.

The Bulldogs showed off their running game and air power through the night, earning three rushing touchdowns in the game. Bulldog quarterback Andrew Perez helped get the ball to the red zone to set up the touchdowns.

One of the Bulldogs three touchdowns came in big-play fashion from Curtis Aflleje, who was about to ask for a sub right before breaking a sure tackle for loss from the Dolphins defense and turning the ball upfield for a much needed score to go up 21-12 after a successful PAT.

“It’s funny,  before that play, I was asking coach [Isiah Cruz] for a sub. Coach replied, ‘Curtis, this is where the big boys step up, you have gotta dig deep, it’s where the heart comes in,” said Aflleje on the sequence before his big run.

“I’ll dig deep for my team, I’m exhausted, but that’s not gonna stop me from scoring for my team,” he continued.

Aflleje’s touchdown proved big after Southern had scored on a last second effort from Jared Gomez, but missed 2-point conversions was a deciding factor in the end. The Bulldogs, behind kicker Jesse Rojas, was perfect from the PAT’s going 3-of-3, but Southern failed to convert on either of their two scores.

The momentum took a shift in the second half when the Dolphins scored two more touchdowns, which were bigger than the two yard touchdown run they scored before halftime.

Wendy’s Players of the Game Jesse Rojas and Curtis Aflleje.

Both of the team’s defenses were on top of the game for almost the entire first quarter before the Bulldogs got on the board when Curtis Aflleje ran 14 yards into the endzone, making the score 7-0 after the extra point.

After a long offensive drive filled with penalties from both sides of the ball, the dolphins own Dylan Parke ran two yards into the endzone, making it a one point game after the PAT was missed. This made the score 7-6.

Right before halftime, Okkodo scored their second touchdown of the game when Jesse Rojas ran a yard into the house. They made the extra point after the TD and escaped Southern’s grasp, 14-6.

The Dolphins snuck back up on the Bulldog defense when Noah Rosalin rushed for 15 yards, instead of kicking, they attempted a two point conversion to tie the game at 14, but failed, keeping the score 14-12.

The Bulldogs last score of the game was made when Aflleje ran ten more yards into the endzone, making the score 21-12.

In the final seconds of the game, the Dolphins showed might one last time, scoring a five yard touchdown courtesy of Jared Gomez.

The final score of this game was 21-18, the Dolphins dropping the third game in a row and Okkodo earning their first win.

Dolphin Noah Rosalin bounces to the outside for a first down conversion. (photo by Robert Balajadia)

A battle for a loose ball in the air between Southern and Okkodo. (photo by Robert Balajadia)

Dolphin Dylan Parke notices a gap in the defense and runs for a big first down. (photo by Robert Balajadia)

Jared Gomez gets a good return for the Dolphins. (photo by Robert Balajadia)

Bulldog Andrew Perez sets up in the shotgun for the opening drive of the game. (photo by Robert Balajadia)

Southern’s defense stuffs a run from the Bulldogs early in the 1st quarter. (photo by Robert Balajadia)