GECKOS GET EVEN IN SEMIFINALS WIN OVER TITANS

The Geckos defeated the second-seed Tiyan Titans Saturday night at the Okkodo Field 27-12 in a semi-final showdown, avenging a regular season loss to stamp their ticket to the Championship Game. 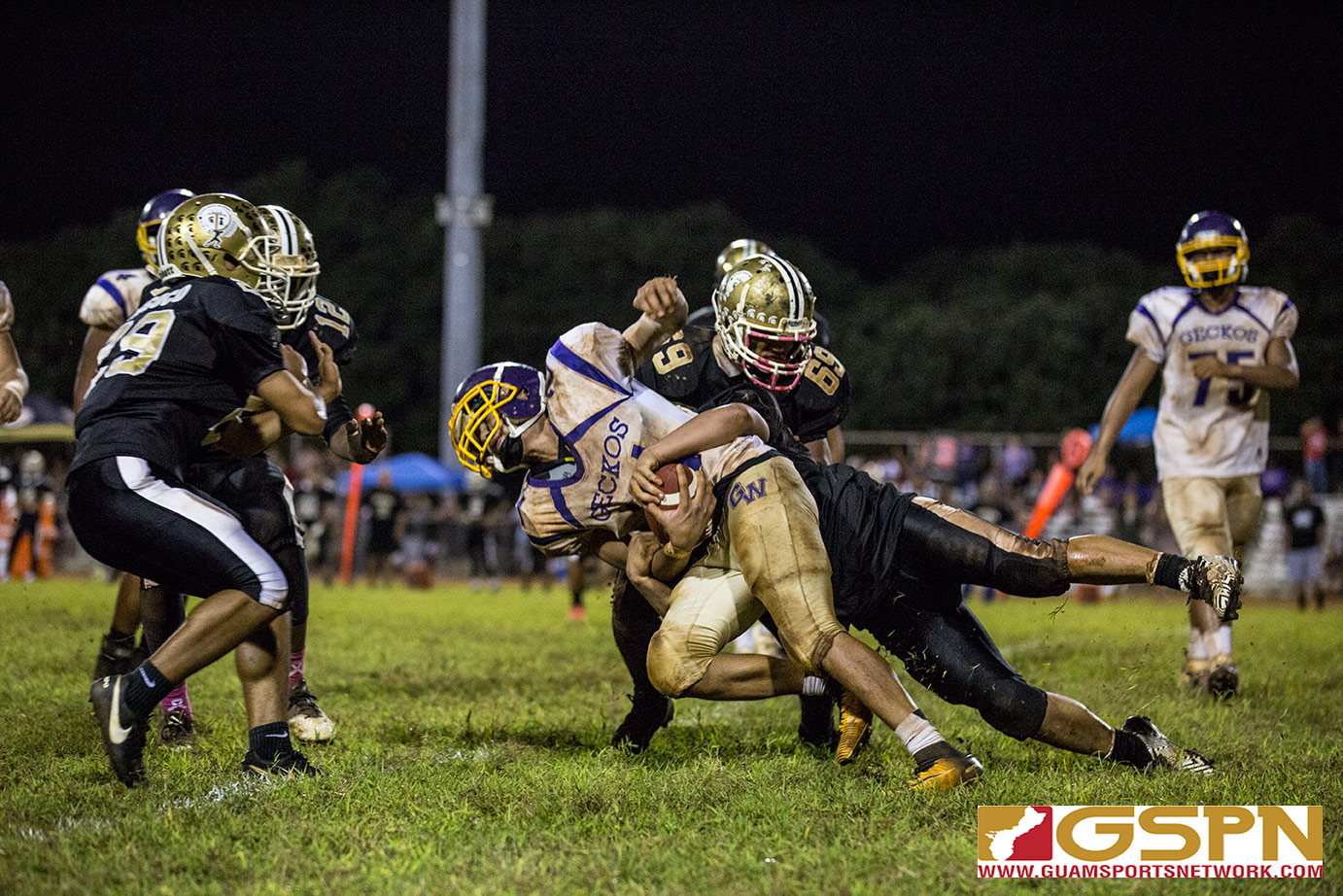 “We didn’t feel pressured coming into this game; the game plan was just to go out and have fun,” said receiver Aaron Jamanila.

The Geckos were shut out by the Titans in a 17-0 loss during the regular season committing seven turnovers.

“I think we put too much pressure on ourselves in our first game against them (Tiyan) and it caused us to make mistakes.”

Jamanila took the opening kickoff 40- yards to give the Geckos good field position on their opening drive. GW’s Calvin Aguon ran the ball three times, gaining 32 yards to set up a goal line situation. The Geckos were unable to make use of the good field position and quarterback Ricky Macias threw an interception to Tiyan’s Fred Lumogda to end their drive.

The Gecko defense looked different from their first matchup against Tiyan, showing blitz to hold the Titans scoreless in the first half. Vance Perez sacked Tiyan quarterback Kobe Quiambao and GW’s Jerome Quichocho recorded a big 10-yard tackle-for-loss on third down to prevent the Titans from scoring.

Aguon continued to gain yardage in the second quarter and found the end zone on a seven-yard touchdown to go ahead 7-0. The Titans looked to tie the contest late just before halftime, but Jamanila ended the drive with an interception.

Tiyan made adjustments to the GW pass rush defense and scored on the second play of the second half with receiver Tyler Pangelinan snatching in a 55-yard touchdown reception. Pangelinan caught a pass in traffic at midfield and turned a short pass into a touchdown. The extra point was blocked by GW’s Noah Quichocho to keep the Geckos ahead 7-6.

The Geckos gained good field position on the ensuing kickoff with Aguon returning the kick for 35 yards. After moving the chains for a first down, the Geckos used some trickery and scored on a half back screen pass play. GW’s offensive weapons, Jamanila and Aguon, lined up together on the right side. Macias threw a screen pass to Aguon behind the line of scrimmage who back tracked as Jamanila took off. Instead of running to gain yardage, Aguon launched a pass to a wide open Jamanila. Jamanila jogged into the end zone after multiple defenders abandoned him to rush and tackle Aguon.

“I credit our offensive coordinator (Bill Quichocho) for good play calling,” said Aguon. “We are just going to continue to work hard in practice and listen to what the coaches ask us to do.”

The touchdown pass to Jamanila tallied for 28-yards as the Geckos went ahead 14-6 with Macias converting the extra point kick.

The Geckos caught a big break on special teams on the ensuing play. Macias’ kickoff bounced deep in Titan territory but the Titans were unable to gain possession after touching the football. The Geckos recovered deep in the red zone and later scored on a goal line run by Keanu Gray to go up 20-6 after a missed PAT.

The Titans entered the fourth quarter trailing by two touchdowns. They needed a big play and got it from receiver Andrew Blas. Blas shook off two Gecko defenders and was wide open for a 45-yard reception from Quiambao to cut the lead to 20-12. The extra point was blocked again by the Geckos, this time lineman Jose San Miguel to preserve an eight point lead.

With six minutes remaining, the Geckos attempted to put up insurance points but the Titans stopped them on four downs. Tiyan’s Lumogda and Donovan Camacho prevented the Geckos from gaining yardage with hard solo tackles. Bryen Carbullido recorded a tackle-for-loss on 4th-and-short to give the Tiyan offense possession.

Time was ticking and Titans needed a touchdown and a 2-point conversion to tie contest. The Titans went to the air with Quiambao looking to connect with multiple receivers but unable to complete a pass. On fourth down, the Titans have no choice but to go for a first down with three minutes left. Quiambao scrambles right but all receivers are covered and he gets sacked by GW’s Jon Espino to give up possession on downs.

The Geckos look to kill time with their run game but Tiyan defenders Franklin Babauta Jr and Camacho limited multiple running backs to no gain. The Geckos were on the Tiyan 30-yard line and elect to keep their offense on the field on fourth down instead of punting. With the Titans anticipating a run, the Geckos go to the air and Macias finds Jamanila for a 30-yard touchdown to secure the 27-12 victory.

Macias threw two touchdowns in the win, giving him 21 total touchdowns for the season (according to GW statisticians) which is an IIAAG record. Aguon rushed for 115 yards and a touchdown, he also threw a touchdown pass. Jamanila caught six passes for 91 yards which included two touchdowns. Jamanila also had an interception. Perez recorded two sacks for Rios’ defense.

“I give much respect to Tiyan, they played a hard game and we both left it on the field,” said Jamanila.

Pangelinan tallied 70 reception yards and a touchdown; Blas caught the other Tiyan touchdown pass and had 54 total yards. Javier Lujan rushed for 49 yards to lead the Titans on the ground. Lumogda had a game high nine tackles, an interception and also rushed for 25 yards on offense. Camacho also had a big game on defense for the Titans with eight tackles.

The Geckos move on to meet the FD Friars for the title this week at a location to be determined. The mindset will be the same for the Geckos as they look to pull off the upset.

Gecko Calvin Aguon scores a touchdown to put GW on the board. (photo by Mike Ebio)

Gecko Aaron Jamanila sprints through the middle of the field for a big gain. (photo by Mike Ebio)

Tiyan running back Javier Lujan bounces outside for a short gain. (photo by Michael Ebio)

Tiyan punt returner Mark Laanan takes a big hit on a leap through the air. (photo by Mike Ebio)