ISLANDERS UNDER NEW REGIME FOR 2017

Under new head coach Allen ‘Seau’ Blend, the JFK Islanders are ready for 2017 with a blend of young and experienced talents. Familiar faces are taking up new roles for a new era of Islander football. 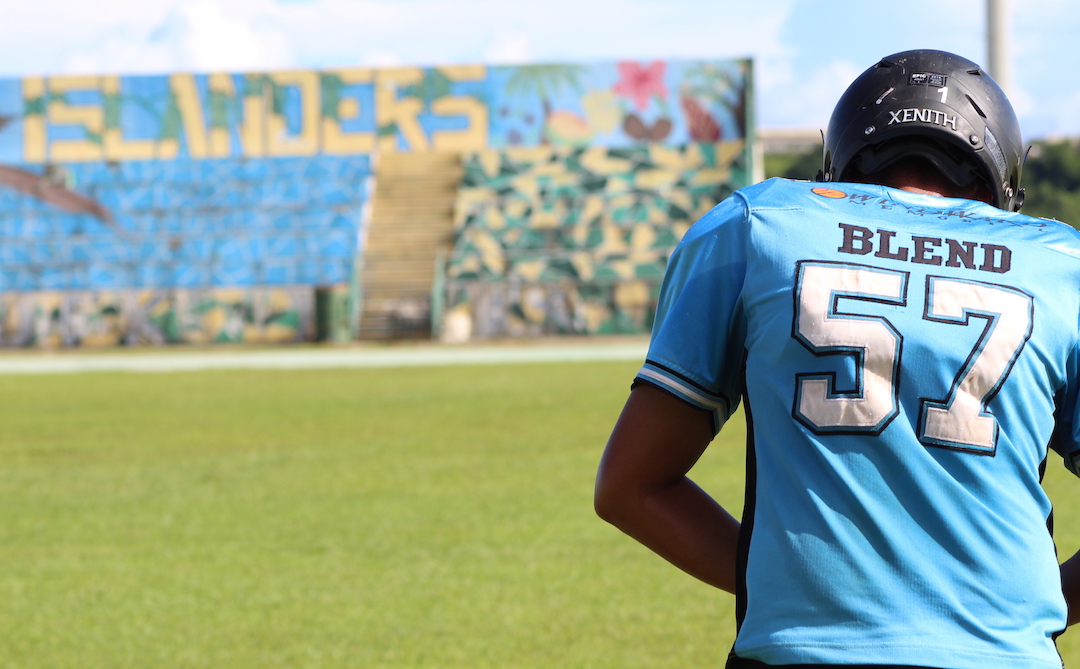 One of the most familiar faces of Guam football – Allen Blend – has taken over as the head coach for the JFK Islanders program. The longtime player and equally long youth coach has taken on his newest venture which will be one of his toughest challenges yet.

“It’s been a long time coming and I’ve wanted to take my coaching career to the next level,” said Blend on what prompted his desire to coach high school. “As a first year coach I’m hoping for a winning season.”

Blend is most famously known for his longevity with football, on the field or on the sidelines, which means his stint as a head coach is one for the long haul and a way to give back to the sport he loves.

“I like the challenge and I want to make sure I have my hand in high school football. When I was growing up and going through the ranks, there was someone who went out of their way to coach me. This is my way of giving it back, paying it forward. We’ve got a fairly new coaching staff and the kids are adapting very well,” stated Blend.

Moving the chains this year for JFK will be a handful of new faces with the departure of the duo-quarterbacks Nolan Chamberlain and Ricky Brown. Another blow to the offense was all-purpose offensive threat Tyler Pangelinan transferring to Tiyan for his senior season.

Manning the quarterback duties for JFK will be Allen Blend II, who isn’t a stranger to the position after holding down that spot for the Hal’s Angels in the GNYFF. But with a few experienced offensive linemen, including anchor Christopher Parker, the Islanders will be giving their first-year quarterback as much time to adjust as possible.

“It’s my job to keep up our line’s intensity and I have to make sure we’re all performing the way coach expects us to. We have a young line, but they’ve been playing in the youth leagues so I think they can handle their responsibilities,” said Parker.

Parker also plays on the defensive line and only really gets to catch his breath during special teams. The senior has seen his share of ups and downs with the team and he’s just hoping to make his biggest impact yet as a player.

“I want to be noticed as one of the best linemen in the league, but really I just want to win a championship. I really feel we can win a championship this year, no matter what people are saying about us,” added Parker.

Returning as a receiving threat for the Islanders will be Jonah Hahn, who has shown flashes of big-game ability over the past two years.

Holding it down in the middle will be linebacker Chase Spotanski, who has taken up the leadership role on defense with staple linebacker Sean Gomez graduating last year. Spotanski has found success every position he plays, even taking a few snaps on offense, but his tenure as a linebacker has him most excited.

“I was training for middle linebacker since last year, but I needed to switch to defensive end when the team needed it. Transitioning back to linebacker isn’t really an issue, I’m looking forward to having more responsibility,” said Spotanski.

Chase will be playing for his third coach in three years after transferring from Guam High. Chase was under the tutelage of Coach Mike Pangelinan last season and now will be taking direction from coach Blend. But for Spotanski, coaching under Blend will be more familiar given his current family ties.

“He’s my stepfather and I’ve grown up with him so transitioning under him will be easy,” laughed Spotanski when asked about another coaching change. “[Blend] and coach Pangie also played for the Angels so their coaching style is similar.”

The Islanders visit the FD Friars on opening weekend at the UOG Field at 10 am for the first day-game of 2017.

Quarterback Allen Blend II will make his debut against the FD Friars. (photo by Robert Balajadia)

The Islanders run through passing drills early in practice. (photo by Robert Balajadia)

One of the Islanders main receiving threats Jonah Hahn will be Blend’s biggest target. (photo by Robert Balajadia)

The linemen show strength in the tire flip. (photo by Robert Balajadia)