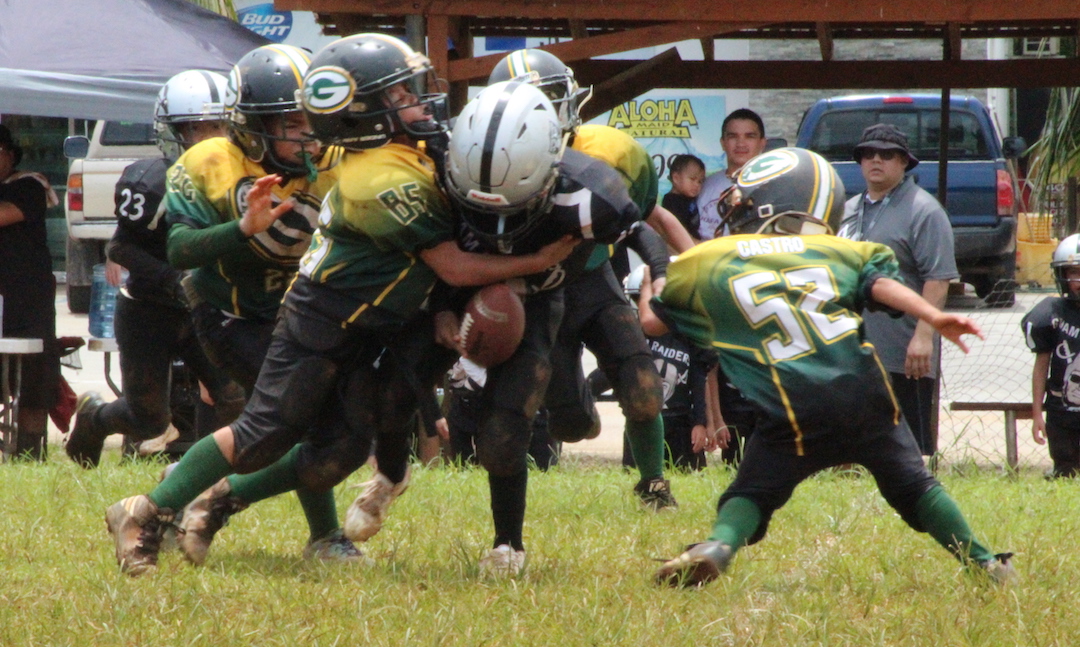 This past Sunday, two of the best teams in the Triple J/Ford GNYFF Youth Football League Manha Division went head-to-head at the Eagles Field Mangilao. Both the Guam Packers and Guam Raiders went to battle as each fought to maintain their supremacy in the division. At the end of four exciting quarters, it was the Packers who walked off the field with the 20-18 victory.

Not wasting any time, the Packers set an early tone with the run game ad Kayler Ignacio began to work with an eight yard run. On the ensuing play, Ignacio exposed the Raiders’ defense as he pounded his way through for a 42-yard touchdown. After scoring quickly, the Packers would also prove their worth defensively as they forced the Raiders to turn the ball over on downs.

Wendy’s Players of the Game Deon Abating and Kayler Ignacio.

The Packers stuck to the ground and pound on their next series that led to an eventual touchdown by Packers’ quarterback Deon Apatang. With a PAT conversion, the Packers took a commanding 14-0 lead.

Despite their early deficit, the Raiders remained calm and managed to weather the early onslaught by their opponents and made things a bit more interesting. After moving the chains down field, the Raiders finally ended the drought and scored a touchdown backed by Noah “Turbo” Flores four yard run that found the endzone.

With less than ten seconds left in the opening half, the Raiders responded huge on the defensive side as Peter Roy Perez read the eyes of Apatang and managed to pickoff the Packer quarterback. Perez’s nab of the ball eventually led to a touchdown that narrowed the gap to 14-12.

The offensive response continued in the second half as the Raiders maintained possession for the entire 3rd quarter. It wasn’t until the fourth where the Raiders broke down the Packers defense yet another time as Flores blasted his way through for a lead-changing touchdown.

With less than four minutes left in the game, both teams gave nothing but their best and layed it all on the field. However, it was the Packers’ Apatang who decided to keep the ball all while trotting into the end zone and giving his team a 20-18 lead.

Time eventually became the Raiders worst nightmare as there wasn’t much left on the clock. Despite being able to move the chains, the Raiders knew nothing was good enough unless they got into the end zone. As the time expired and officials blew their final whistle, it was the Packers who celebrated victory.