The St. Paul Lady Warriors took a trip to Agana to play the mighty Academy Cougars Saturday night in a showdown in IIAAG Girls Volleyball. The Cougars had been unbeaten at home before the game, and their streak would continue as they dropped the Warriors 17-25, 25-21, 25-17. 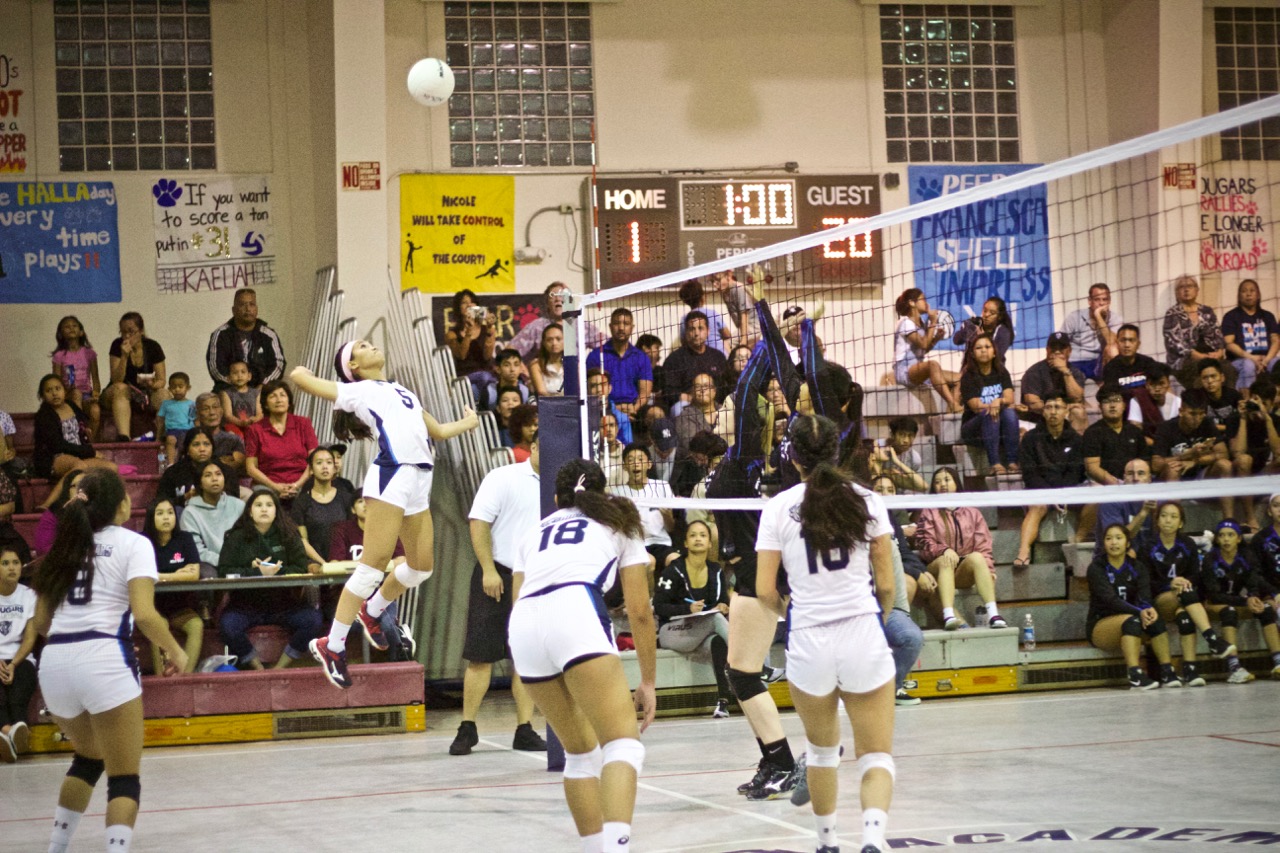 The St. Paul Lady Warriors took a trip to Agana to play the mighty Academy Cougars Saturday night in a showdown in IIAAG Girls Volleyball. The Cougars had been unbeaten at home before the game, and their streak would continue as they dropped the Warriors 17-25, 25-21, 25-17.

St. Paul (4-4) were looking to advance in the standings ahead of the upcoming playoff push.

The Lady Warriors came out all business as they rode the hot hand of Chloe Farwell who snapped off a 5 serve scoring streak to open the set. Both squads fought hard to maintain with Academy finally finding their footing in the second set.

The veteran Cougar team really hit their stride in the middle of the third set as they defended their unbeaten streak at home. St. Paul however did hang around until the middle of the final set. That’s when the claws came out and the ‘Mighty’ Academy Cougars pull of the come from behind victory in three sets.

St. Paul’s Chloe Farwell helped her team get off to a great start as she set the tone scoring five points off her first five serves. The Cougars, uncharacteristically, struggled in the early minutes. Academy could not get get out of their own way allowing some routine mistakes turn into points for the other side.

Veteran setter Tori Smith knew the rhythm was off stating, “We started kind of slow. I think our communication was really down and it just really hard for us to bounce back from that.”

Bounce back in the second set is exactly what the Cougars did. Academy was able to get big production from their offense. Tori Smith played a big part keeping her team ahead after a 7-0 point run on the Cougars opening serve. St. Paul made it competitive in the later minutes of the set as they hang around just enough to give Academy a scare, but Academy sunk their teeth in to close out the set to force a deciding 3rd.

Academy, still riding off the momentum of set two, picked up where they leave off. At the net it was Laressa Halliday and BillieJean McDonald for the Cougars. Both were an unstoppable force in front of the nylon. Halliday stuffed most of what the St. Paul middle line was throwing her way, while McDonald was also prolific behind the serving line as well.

Academy, not usually known for on-court drama, let this one slip right into that category.

Doriaun Calvo came to the line looking to spereate her team on the scoreboard and she accomplished just that! Calvo broke off a six-point scoring run, followed by Tori Smith who added another three in a row from the line.

And the ‘MIGHTY’ Academy Cougars would win the match in three sets to stay perfect at home.