A battle of the South commenced between the Outlaws and the Southern Cowboys Sunday down in Talafofo in the GNYFF’s Matua division and it did not disappoint! 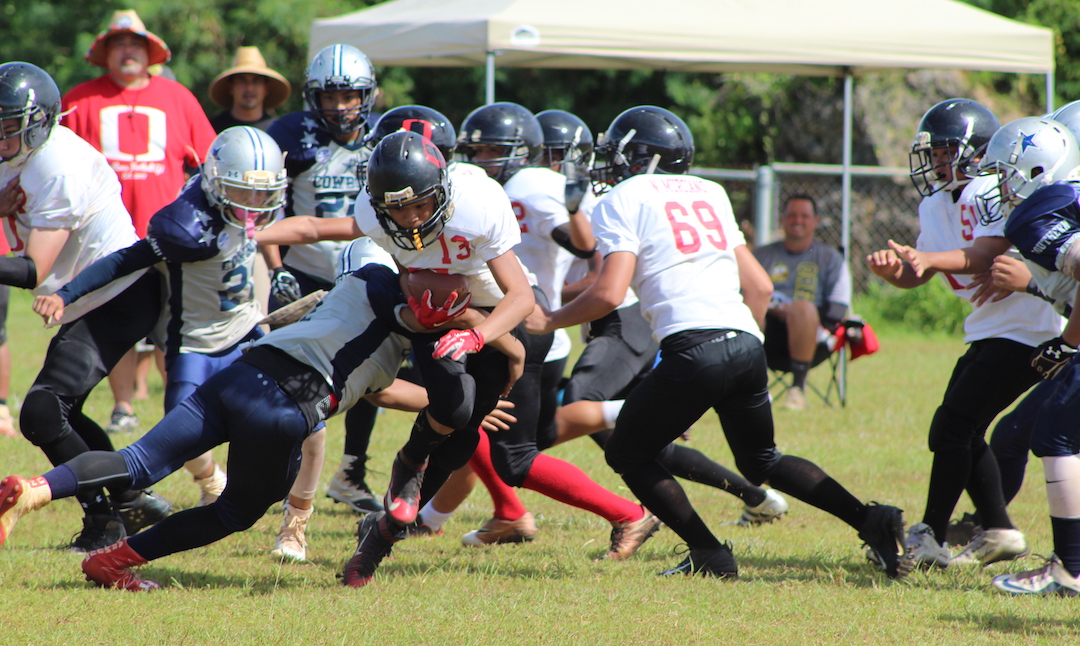 A battle of the south commenced between the Outlaws and the Southern Cowboys Sunday down in Talofofo in the GNYFF’s Matua Division and it did not disappoint!

The Outlaws were looking to right a season’s wrong in this one as they were beaten by the Cowboys last season. In a thriller that was close, down to the last play, the Outlaws outlasted their opponents 20-12 the take the win.

Both teams came into this contest coming off a loss and the Outlaws were out to prove why they belong throughout.

THE HEAT WAS ON

The former Southside 49ers team brought all they had in this statement game. The Outlaws started the game with the ball and were able to move the offense down the field with ease. Still in their first drive, the Outlaws found themselves deep in Cowboys territory with a chance at the end-zone.

Outlaws quarterback Cisco Brown, on 3rd down lined up under center, dropped back and on a short curl route, spotted what was a wide open tight end Josiah Quintanilla. Quintanilla all alone, was able to make the grab at the three and barrel his way into the end zone, TOUCHDOWN OUTLAWS!

However, missed extra points were a recurring theme for both teams, resulting in just a 6-0 Outlaws lead.

Both squads broke down in the second quarter. The Cowboys had a fantastic 30 yard punt return from Ian Naputi, only to have it negated on the next play after a fumble caused a 10 yard silver and blue loss of yards. On the other side, the Outlaws had problems of their own. The offensive line wasn’t able to hold resulting in several big sacks on the quarterback.

The second half looked much different as both teams made the adjustments needed. The Cowboys opened up the third quarter with an explosive 80-yard kickoff return. Naputi received the kick at his own 20, broke to his right side and followed a wall of Cowboy blockers leading the way.

Straight down the sideline untouched was Naputi, and just like that, within thirty seconds of the start of the half, the game was knotted at 6-6, as the Cowboys missed the point after.

Naputi wasn’t done there, playing both sides of the ball he also shined on defense. The Outlaws had a chance to put some separation on the scoreboard but Naputi stopped Shelby Meeks from breaking loose and saved the touchdown, keeping his team in it still in the 3rd.

During an Outlaws drive, just like the first score, Brown found Quintanilla on a tight end curl route, count the 6! The Outlaws went on to miss the extra point, but held the lead at 12-6. Short-lived was the lead as Naputi came in running for an injured Cerilio Reyes. Naputi took the hand off, bursted out of the back field and tumble for a 15-yard score. 12-12.

The Cowboys converge on Outlaws receiver Jonneth Burkes after a short reception. (photo by Robert Balajadia)

The 4th and final quarter turned out being the most exciting in  the already action packed game. Four minutes were left on the clock as the Outlaws were driving. Cowboys looking for the stop and turnover on downs.

The hand off was to Shelby Meeks at his own 45. Meeks, with a head of steam broke through one tackle, bounced to the outside and broke another tackle. Meeks, still on his feet stumbled and broke yet another tackle. (A run that was reminiscent of Marshawn Lynch’s 67 yard run against the Saints in ’11.) Shelby snapped off a 55-yard touchdown run after it was all over, after breaking what this reporter counted as seven tackles.

For good measure, the Outlaws took a 20-12 lead after the games first successful PAT.

Two final minutes would decide it. The Cowboys, needing to make up ground quickly, got off to a good drive. Three plays in, however, quarterback Evan Brown was hurt and taken out. Cowboys offense, despite that stepped up. The line was able to get good protection and the silver and blue moved the ball with efficiency.

Time was not on their side though, Cowboys had one final play to try for the tie. With seconds ticking away, the Cowboys on the Outlaw 35 yard line heave up a prayer to the front of the end zone, underneath was Elijah Ferrell. Farrell with the catch, try as he might the receiver wasn’t able to get past the plane and stopped, and shoved out of bounds at the 1. The Outlaws hang on to beat the Southern Cowboys 20-12.

Cowboys offense runs into confusion a bit of confusion as well as their own teammates. (photo by Robert Balajadia)

The Outlaws await the kickoff after the Cowboys put up their first score. (photo by Robert Balajadia)

Thomas Benavente takes the handoff for a short run. (photo by Robert Balajadia)

Cerilio Reyes swats away a pass in the end zone. (photo by Robert Balajadia)

Outlaws Josiah Quintanilla hauls in a first down pass. (photo by Robert Balajadia)