The undefeated Broncos matched up against the undefeated Packers on a rainy Sunday afternoon, in a Matua division showdown. The Packer defense played stout all game, shutting out the Broncos 15-0 with each of their points coming off of a big defensive play. 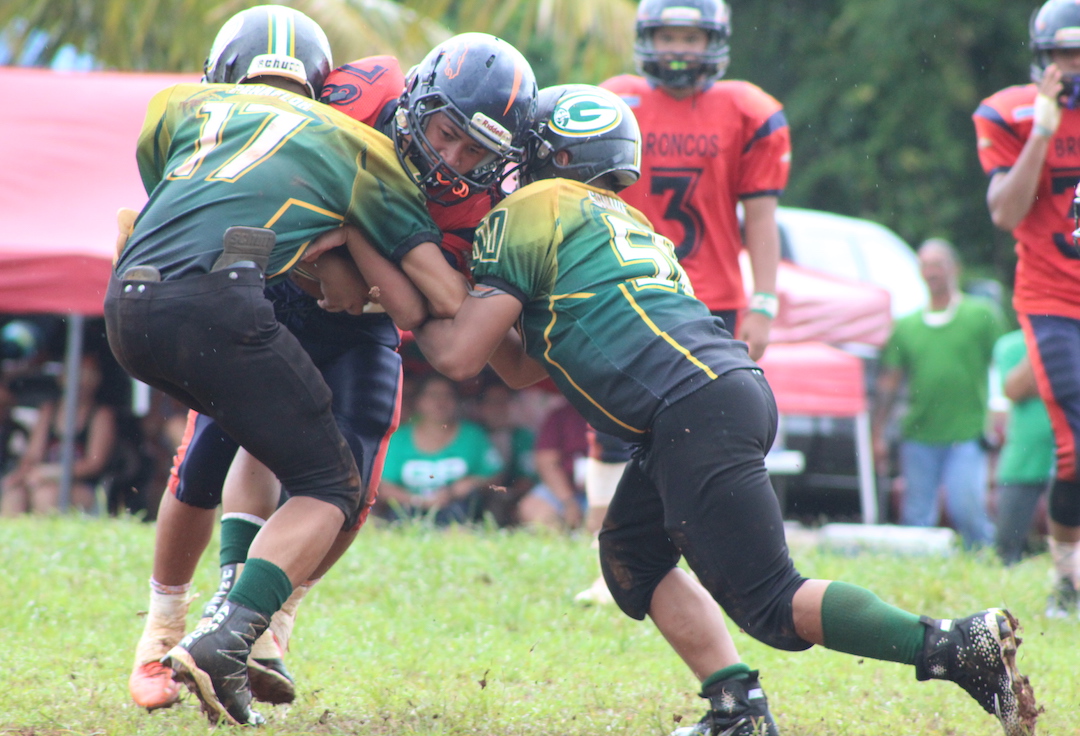 The undefeated Broncos matched up against the undefeated Packers on a rainy Sunday afternoon, in a Matua division showdown. The Packer defense played stout all game, shutting out the Broncos 15-0 with each of their points coming off of a big defensive play.

Punting was a key issue for the Broncos with the Packers turning two blocked punts into direct points. The first blocked punt came in the 1st quarter with the ball sailing out the back of the end zone for a safety to give the Packers a 2-0 lead.

The second blocked punt came late in 4th quarter, but this punt stalled in the air long enough for Packers Mikey Santos to get under it, catch it and run in untouched for a 1o-yard touchdown return to put the game out of reach 15-0.

The Packers also came away with three interceptions on the day, but none were bigger than defensive back Chris Cowarts near pick-six in the 3rd quarter.

Cowart matched the Broncos receiver stride for stride and noticed Broncos quarterback Damian Cruz scrambling out of the pocket. Cruz tried to hit his target while on the run, but Cowart was faster to the ball and plucked the reception away from the Broncos at the 40-yard line. Cowart then made his move towards the end zone only to get stopped just shy, at the two-yard line.

Packers Bradley Zapatos punched in the games only offensive touchdown from two yards out to put his team up 9-0, following a successful PAT.

“We did good out there, we needed to execute, and we did. This whole team is like a family, we’re like brothers and sisters,” said Cowart.

Wendy’s Players of the Game – Mikey Santos and Chris Cowart.

The Packers received the first half kick to start off the game. Packers ran for a total of 32 yards before the Broncos defense took over and gave them a 20 yard loss followed by a pair of incomplete passes, turning the ball over to the Broncos offense.

When the Broncos had the ball for their first drive of the game, they only produced seven yards of total offense before punting off the ball. During this punt, the Packers special team blocked the punt, making the ball bounce past the end zone, causing a safety, making the score an early 2-0, Packers in front.

Besides this production from the Packers, both teams were unable to get much offensive work done before the half, turning possession of the ball over for a combined three turnovers, both teams keeping the offense on the field during first down.

Soon after the start of the third quarter, the Packers scored a touchdown after Christopher Cowart made a 44 yard interception return, barely missing the goal line. The score was punched in when Bradley Zapatos ran two yards up the middle into the endzone. They made the score 9-0 after successfully punching in an extra point.

The Broncos continued to struggle getting any offensive yardage.

The final touchdown of the game came early in the fourth quarter of the match up. This touchdown was scored by Mikey Santos when he brought a punt all the way back to the house. They did not score the extra point, making the score 15-0.

The Broncos had the ball in the final minutes of the game, only to have it intercepted by the Packers own Dreyvin Apatang, sealing the deal.

The final score of the game was 15-0, the Packers are still undefeated, and the Broncos are now 3-1, this being their first loss of the season.

Packers Davey Santos bounces to the outside for a run against the Broncos. (photo by Robert Balajadia)

Bronco Kichiro Sichiuo is met with a big hit on special teams. (photo by Robert Balajadia)

Bronco Kichiro Sichiuo looks for space to run on a kick off. (photo by Robert Balajadia)