The Knights take out the Warriors in two sets. 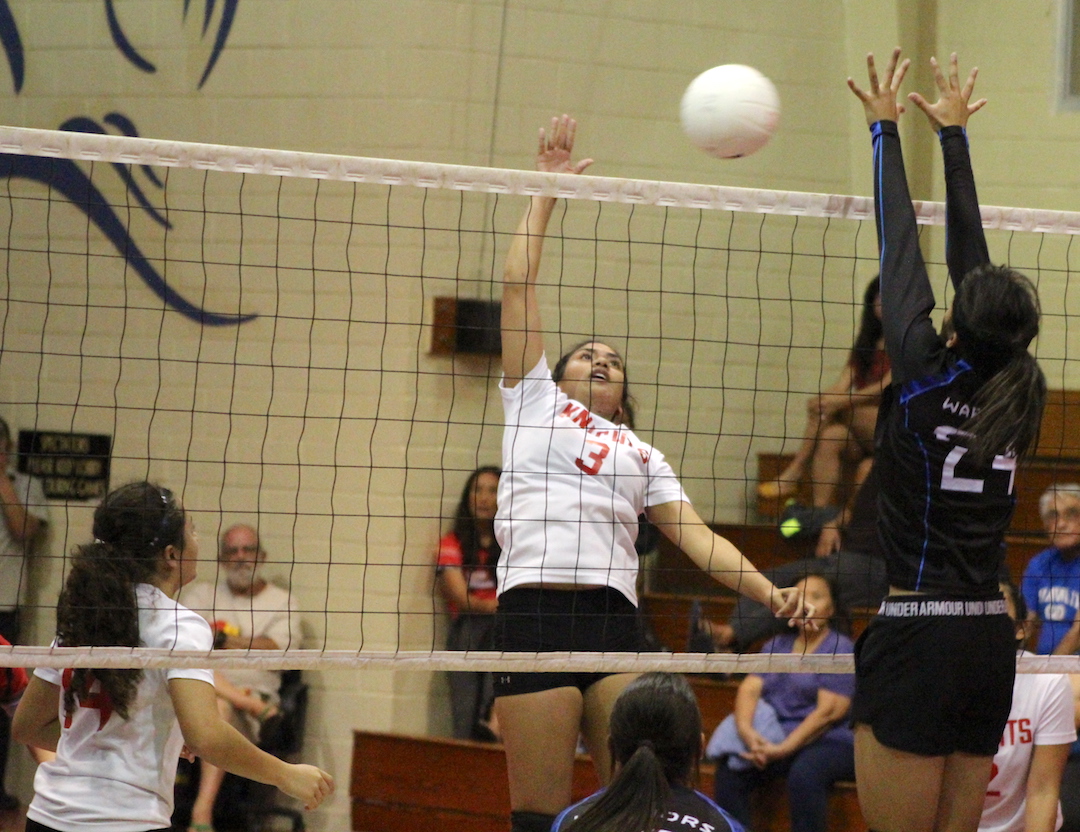 It’s only the opening weekend of the IIAAG Girls Volleyball League, but the St. John’s Knights made an early season statement with a 25-17, 25-20 Saturday night win over the St. Paul Warriors at home.

After winning the preseason tournament, the Knights continued their momentum against a talented Warriors squad.

Junior setter Hana Fernandez set the tone for the St. John’s offense, running the plays with precision while sophomore outside hitter Hallie Wigsten powered the Knights with eight kills.

“[Hana] did a great job running the offense and getting the hitters involved. [Hallie] was swinging with confidence against a very good St. Paul block,” said Knights coach Chris Shepherd.

The Knights had 23 kills on the night as opposed to 13 for the Warriors.

“Overall, I’m very pleased with our team effort. It is very early in the season an we have a lot to improve upon,” continued Shepherd.

Wendy’s Players of the Game Caitlyn Nui and Hallie Wigsten

It was a feel-out process for both teams before St. John’s pulled away from an 8-8 tie to go on a 10-2 run, capped off by Wigsten’s third kill finding an opening in the middle of the St. Paul defense.

The deficit was far too much for the Warriors to bounce back.

“They played very consistent volleyball,” St. Paul coach Al Garrido said about the Knights. “When it comes down to winning close games the most consistent team will usually win the game.”

The Warriors had some life early on, jumping to a 3-0 lead behind the strong net play of Niah Siguenza. It was short lived, however, as the Knights rolled back with five unanswered points.

The game went to an 11-11 draw before St. John’s went on another big run. Lone senior on the Knights starting lineup Caitlyn Niu was instrumental during the run with a couple of kills.

Wigsten had the cross court kills going in the second set, leading her team with five of the 12 kills. Niu added four kills.

The game ended when St. Paul’s Siguenza hit into the net.

“I really am proud of our team’s progress,” Garrido added about the Warriors. “We are only in the second year of our program and they are growing leaps and bounds. Patience and reflection will be key.”

Setter Hana Fernandez gets in on the swinging action in the 2nd set. (photo by Robert Balajadia)

Tylee Shepherd gets in a groove from the service line early in the opening set. (photo by Robert Balajadia)