The FD Friars earned their first win of the season over the JFK Islanders. 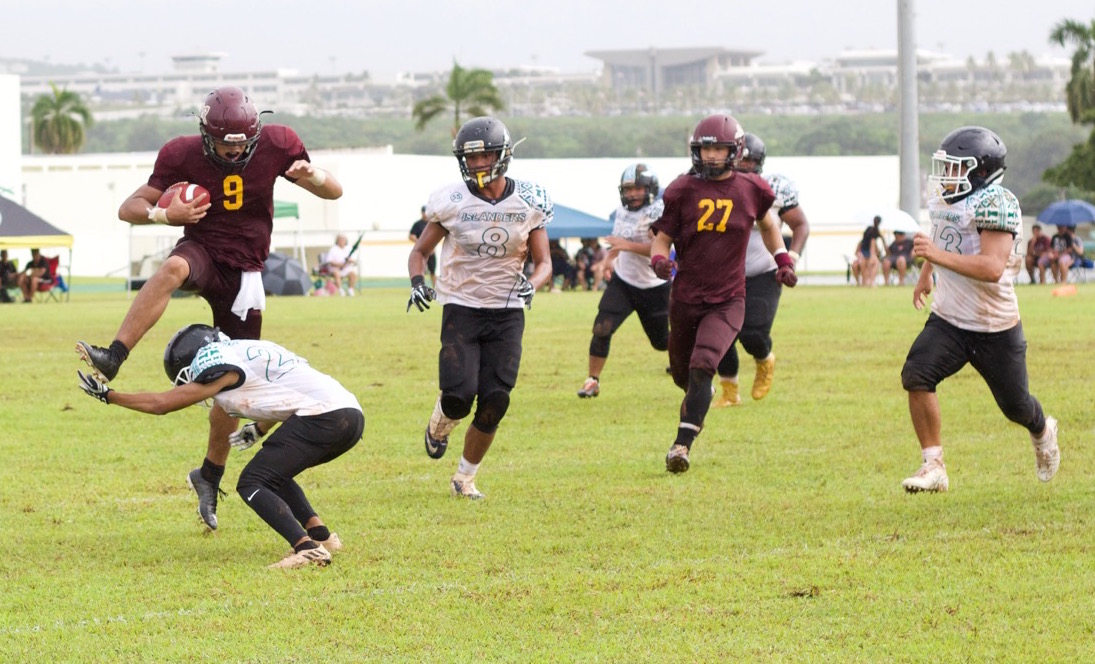 Saturday mornings football game between the FD Friars and JFK Islanders was off to a bizarre start with the Friar team bus getting pulled over by the fire department for overcapacity, causing the games 10 am start time to be pushed back over 30 minutes.

Despite the setback, and the dampening rain, the two-time defending champs got back to work by shutting out the Islanders 28-0 at the Islander Field.

News broke last week that All-Star running back De’Aundre Cruz had a change of heart and decided to finish his senior season with the Friars instead of in Shoemaker, Texas. Cruz wasn’t available for Week 1, but the Friars proved they are just as dangerous without Cruz in the lineup.

Cruz might be eligible for game time in Week 2 of the IIAAG season and the backfield is more than happy to welcome him back.

“I feel our backfield is 10x better with [De’Aundre] coming back. We’re really proud to have him back to help us try and win another championship,” said Artero.

Xavier Naputi’s first touch as a Friar resulted in a touchdown after taking the opening kickoff 82 yards to the house for the quick 6-0 lead. Kicker Giancarlo Abril knocked in the PAT to put FD up 7-0.

“It was everyone who blocked for me that made that happen and I can’t thank them enough. From the first practice they treated me like a brother and the bond was there,” said Naputi on his big opening play.

The Friar defense quickly got their offense back the ball thanks to a big sack from Friar defensive end Raven Santiago on the Islanders opening series, forcing a quick three-and-out.

On the Friars second play from scrimmage, Artero darted up the right side of the field for a 39-yard touchdown as FD enjoyed a 14-0 lead within the first four minutes of the game.

The rainy weather started to pick up in the 2nd quarter and the Friar offense started cool off from their blazing start. A running committee shared some touches before Artero got his fourth of the game which he turned into a 28-yard score through the right side once more, even out running his blocking, to put FD up 21-0.

“We really have to give it up to our offensive line. I can’t thank them enough for what they do for the team,” added Artero.

FD added their final score midway through the 3rd period as quarterback Daniel Phillips connected with a wide-open streaking Naputi for an 84-yard touchdown. Abril went perfect on the PAT’s to give FD the 28-0 lead.

The rains reached its heaviest downpour in the 4th quarter with both teams working in their benches.

Justin Camacho was the lead yard getter for the Islanders getting 19 yards on seven carries.

Bulldogs vs. Geckos called off

Saturday’s IIAAG Football opening weekend didn’t end on a good note with the final game being called off due to uniform issues. The GW Geckos and Okkodo Bulldogs showed up to their contest both sporting dark colors, which is considered a safety hazard in the sport.

The game was originally scheduled to be played at the UOG Field but got moved to Okkodo due to the Rugby 7’s tournament going on. GW was on scheduled to be the home team, which usually wears the colored jersey.

No official decision has been made on the game, whether a replay or forfeit will be issued.

The FD Friars and JFK Islanders meet for the first time in 2017. (photo by Raine Delos Reyes)

Islander Justin Camacho takes a handoff for a first down. (photo by Raine Delos Reyes)

Friar Kein Artero gets room to run in the 1st quarter. (photo by Raine Delos Reyes)