PANTHERS HANG ON TO BEAT TITANS

The kickoff at Guam High provided a wealth of exciting moments as the Panthers defeated the Tiyan Titans 8-7 Friday evening in the IIAAG 2017 kickoff. 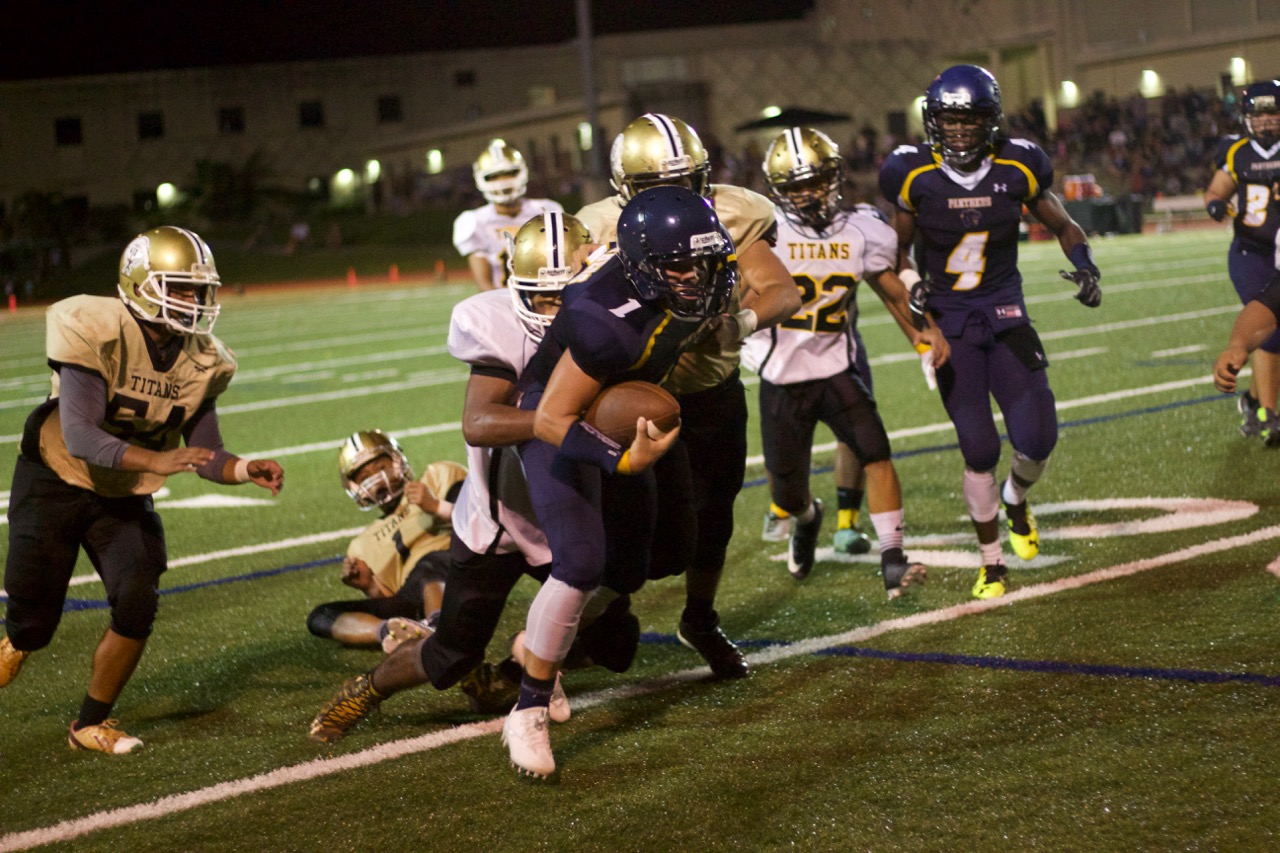 “We just never gave up. We played our best and I knew we were able to hold on to win the game,” said RaSean Jacobs after helping the Guam High Panthers defeat the Tiyan Titans 8-7 in their IIAAG Football opener.

The Panthers were holding on to the one point lead with less than two minutes left in the game. The Titans marched down into their territory and threatened to score, but a penalty and a bad snap gave the Panthers the victory.

Jacobs helped the Panthers on both sides of the field, rushing for a touchdown and combining with teammate Jeylyn Dowdell for the safety to escape with the victory. Jacobs stepped in as quarterback after his brother Travon went down with an injury.

“We need to improve for the next game. Our line wasn’t blocking well tonight and that’s probably the biggest area we need to work on,” said Jacobs. “I also have to work on accurate passing”. Jacobs threw two interceptions in the second half during crucial moments.

Wendy’s Players of the Game RaSean Jacobs and Makoa Bamba.

The Titans looked well to start the game, scoring in the first quarter with a run started by Fred Lumogda. Lumogda dashed down the left sideline and looked to score after scampering for 25 yards before fumbling the ball into the end zone. Fortunately for the Titans, Lumogda’s teammate Avery Amorin quickly secured the ball in the end zone for the touchdown. JFK transfer Tyler Pangelinan provided the extra point kick to help the Titans go ahead 7-0.

The Panthers had difficulty moving the chains after being called for several penalties in the first half. They had difficulty running so they went to the air and found tight end Makoa Bamba for an 18-yard gain to move the chains.

The Panthers went to their hurry offense and continued to run the ball to get into the red zone. After an unsportsmanlike Titan penalty, the Panthers were on the two yard line and Jacobs powered his way up the middle with a quarterback sneak for the touchdown. The two point conversion attempt was no good as the Titans held on to a 7-6 lead at halftime.

The Panther defense stepped up in the third quarter with Bamba, who also plays defensive end, recording a sack and two tackles to drive the Titans backwards. A bad snap to Titan quarterback Kobe Quiambao drove the Titans way back to their five-yard-line as they were faced with a third and long situation.

On the ensuing play, Quiambao scrambled back into his own end zone and was sacked by Jacobs and Dowdell for the safety to take the 8-7 lead going into the fourth quarter.

The Titans looked down and out with time against them but a key interception by Lumogda gave new life to the Titans with just 3 minutes remaining. The Panthers were looking to put insurance points on the board but their drive ended with the Lumogda INT.

Quiambao used the opportunity and started to find open receivers with Pangelinan snatching a huge 32-yard reception and Andrew Blas also catching a 17-yard strike to get deep into Panther territory.

Unfortunately for the Titans, a costly penalty and a bad low snap caused a fumble which was recovered by the Panthers to end the drive with a minute left. The Panthers took a knee as time expired.

“This season, the team has a bunch of young players and every game is going to be a learning experience. We need to work more on our defensive line and the holes in the secondary. I’m sure we will be working on these areas to get better on our next practice,” said Bamba.

Bamba was dangerous when the ball came his way with two catches at 43 yards receiving. Bamba had two catches called back due to penalties and was headed into breaking the 100-yard territory.

Bamba was also excellent as a defensive end, with eight tackles and 1.5 sacks. Dowdell had seven tackles, a sack and a safety for the Panthers. Offensively, Jacobs completed three passes for 68 yards but had two interceptions. Jacobs also ran for 25 yards on the ground.

Donovan Camacho and Lumogda each had 12 tackles for the Titans. Franklin R. Babauta Jr. had eight tackles, Bryen Carbullido recorded five tackles and a sack for the Titans. The Titans will host the FD Friars next week, the Panthers will face the Sanchez Sharks in week two.