SHARKS RUN THEIR WAY TO KICKOFF VICTORY OVER DOLPHINS

The Sanchez Sharks hit the ground running in their first game of the 2017 season with a 18-0 win over the Southern Dolphins. 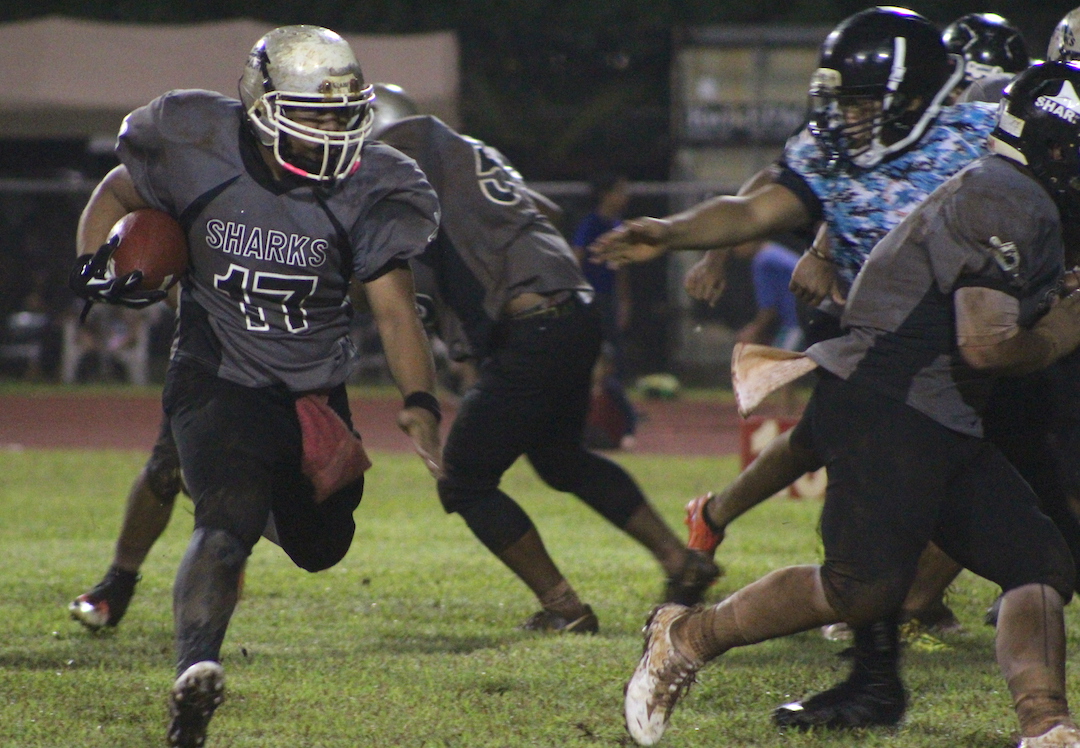 The Toves twins knew they were going to get ample of opportunities for the Sharks despite being high school football newcomers. They quickly made their presence felt in the IIAAG Friday evening kickoff after helping the Sanchez Sharks post an 18-0 victory over the Southern Dolphins at the Okkodo Field.

Kamerin Toves found the end zone twice in his first high school game and fullback brother Kameo supplied a ton of the blocking. One of the goals set out by the twins was to put more points on the board, and they’re off to a promising start.

“I’ve got to give a lot of credit to my blockers. Everyone opened up holes and the guards made it easier for me,” said Kam.

The Sharks broke a scoreless game in the 2nd quarter by doubling up on touchdowns from Kamerin and fellow back Joshua Sablan to head into halftime 12-0. A final score was added in the 4th quarter from Kamerin with the Dolphins reaching the red zone just once all game.

Neither team was able to convert on 4th down in the opening period with the ball floating between both teams 30-yard line.

The Sharks wishbone offense finally found a seem in the Dolphin defense after Kamerin Toves gashed the Dolphins for a 14-yard run to garner their first red zone trip. Their knocking at the goal line was answered with Toves barrelling his way to the games first score.

A missed 2-point conversion left the game within striking distance for Southern.

The Dolphins turned the ball over on a loss of downs on their following series which set up another bruising Sharks run-dominated series that ended in yet another score. Sablan darted straight up the middle from four yards out to extend the Sanchez lead 12-0.

Southern opened up the second half with a big play as Dolphin quarterback Dylan Parke connected with receiver Jared Gomez for 34 yards to creep into Sharks territory. The drive ended on a loss of downs with the Dolphins unable to break through the Sharks front seven.

Toves punched in the games final score from seven yards to up 18-0 after another failed 2-point try.

Southern’s offense made it’s best move in the 4th period with running back Noah Roslin powered his way to a 29-yard run, getting the Dolphins in the red zone for the first time all game. Parke tried to hit Gomez in the end zone to avoid the shutout, but Shark defensive back Harold Gaerlan came away with the interception.

The Sharks will travel to Guam High next Friday while the Dolphins play host to the GW Geckos.

The Sharks ready their line in the 3rd quarter. (photo by Robert Balajadia)

The Sharks nearly come away with an interception in the 2nd quarter. (photo by Robert Balajadia(