It was quarterfinal Saturday at the UOG Field as the Lady Saints defeated Sindalu in the GWTFL playoffs 26-6 while getting a big day from all-purpose player Ke’ann Castro. The Falcon Raiders shutdown the Steel Blazers 22-0 in the early game. 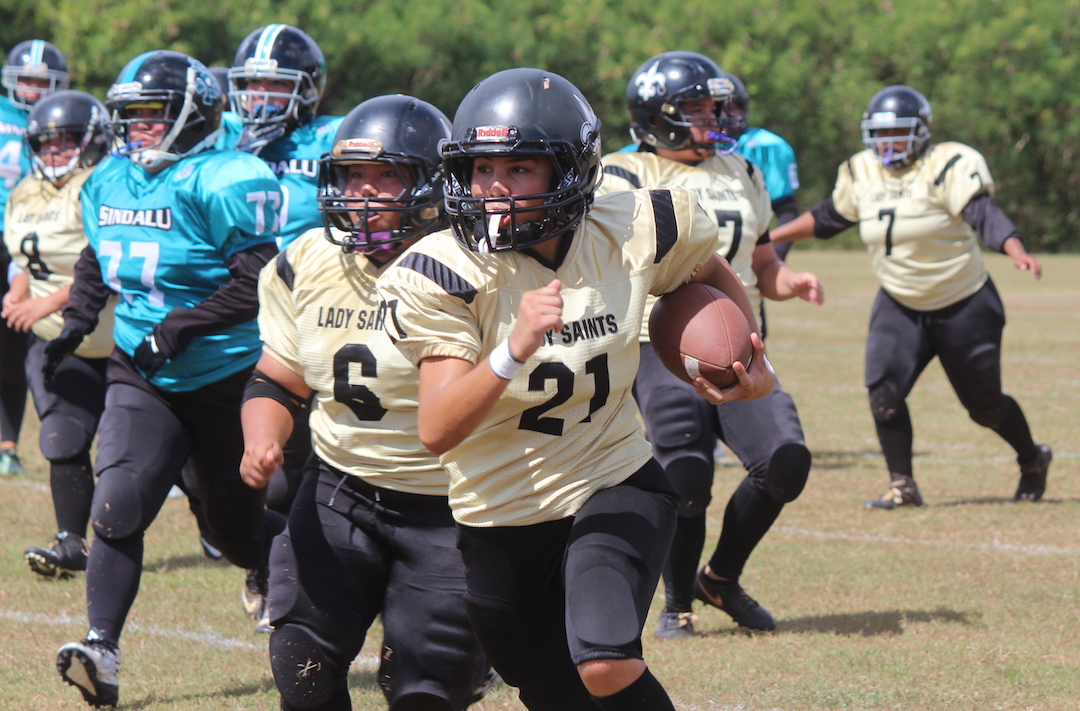 It was quarterfinal Saturday at the UOG Field as the Lady Saints defeated Sindalu in the GWTFL playoffs 26-6 while getting a big day from all-purpose player Ke’ann Castro. The Falcon Raiders shutdown the Steel Blazers 22-0 in the early game.

The Lady Saints won the opening toss and chose to kick, making it a Sindalu football in the opening series. A defensive false start penalty gave Sindalu a five yard gain. After two incomplete passes and a one yard run, Sindalu made the decision to go for it on fourth down. They did not convert, however.

The Lady Saints started their first offensive series at a very good field position.  A nine yard run from quarterback Ciara Cali set up an easy touchdown opportunity. Ke’ann Castro took under center and launched a ball to Kaitlin Blas for a big gain of 29 yards. Castro then threw another pass to Chantel Amanquiton for a 15 yard touchdown. This made the score 6-0, after a three play series. The two point attempt was no good.

Sindalu was set to return the kickoff, but fumbled the ball, giving it back to the Saints. Despite previous success, the Sindalu defense only allowed one yard.

When Sindalu had the ball, they managed to get 20 yards off a pass from Chelsie Gofigan to Vina Terlaje. When attempting another pass, Athena McCarrel of the Saints intercepted the football, causing a turnover.

The previous interception opened the window to an easy touchdown. Castro launched a 54 yard bomb to Cali for her second touchdown pass of the day, making the score 12-0 after the unsuccessful two point conversion.

The next big action came along when the Saints were facing the opposing defense. Castro attempted a pass, but was intercepted by Sindalu’s Terlaje for a pick six, making the score 12-6, her team getting on the board.

In the opening drive of the second half, Castro was handed the ball and rumbled for a 22 yard touchdown run. This made the score 20-6 after the two point conversion was made.

In the final minutes of the game, the Lady Saints scored yet another touchdown. This one was made when Castro took off for a 50 yard touchdown run, outrunning the defense. This was the final touchdown of the game, making the score 26-6.

“We wanted to attack their weak side, our defense gave our offense a boost, gave us motivation,” said Saints coach Dave Cruz.

The Lady Saints will move on to play Legacy in the semifinals of the playoffs.

Running backs Januarie Strong, Anya-Andrea Brown and Angelica Figueroa all found the end zone as while the defense held the Steel Blazers scoreless for the second time this season.

Strong took was shaken up and assisted off the field in the second half, but she made a strong return and is ready to play next weekend.

Anya Brown shakes off a Steel Blazer defender for a short gain. (photo by Robert Balajadia)