SMOOTH SAILING FOR FRIARS DOWN SOUTH

The FD Friars didn’t skip a beat Saturday morning as they overwhelmed the Southern Dolphins on both sides of the ball to the tune of a 45-0 victory at the Dolphin’s field. 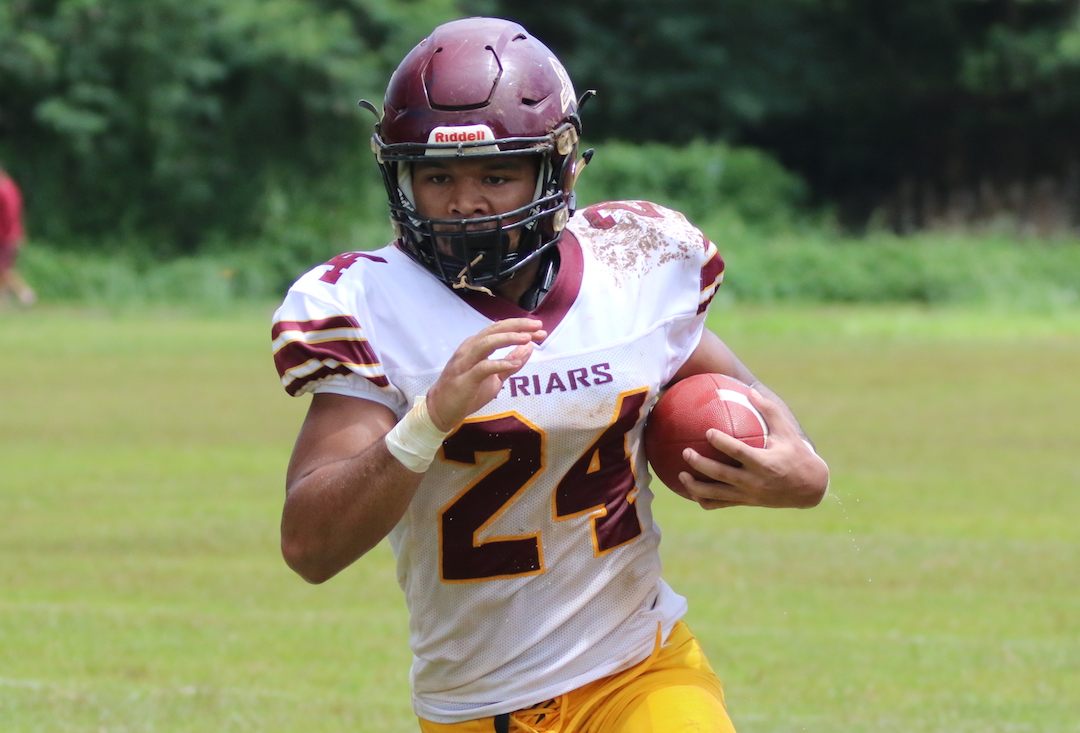 The FD Friars didn’t skip a beat Saturday morning as they overwhelmed the Southern Dolphins on both sides of the ball to the tune of a 45-0 victory at the Dolphin’s field.

The usual suspects where out for FD as Friar quarterback Daniel Phillips threw for three touchdowns with his workload resulting in a 6-of-10 completion percentage for 149 yards.

Running back De’Aundre Cruz found the end zone twice with the starters making their exit after a Cruz 11-yard running score on their first drive of the 3rd quarter to post a 38-0 lead. Cruz ended the day with 95 yards on just eight carries.

Receiver Xavier Naputi hauled in two touchdowns for FD, but none more spectacular than his grab right before halftime. Friar defensive end Rylan Napoleon forced a fumble which the Friars would recover at the Dolphin 27, setting up the Friars for a final drive with less than 37 seconds to play in the first half.

Phillips broke out of the pocket while being hunted down by three Dolphin defenders before letting loose a pass on the run before getting hit. Standing in the left corner of the end zone was Naputi, who had to leap over two Dolphin defensive backs to get the ball all the while tapping his toes in bounds to secure the score to give FD a 31-0 halftime advantage.

Wendy’s Player of the Game Eugene Arriola and Xavier Naputi

“[Daniel] is a great quarterback so I knew he was going to get that ball to me. I didn’t know if I was going to catch it or not, but God helped me through that. And we always have to give it up to our offensive line. You also have to give credit to Southern, they came out and played really well today,” said X.

Friar receiver Brian Anderson caught the only other touchdown, turning a 15-yard grab into a 55-yard touchdown in the 1st quarter.

Leading the way on defense was freshman linebacker Eugene Arriola, who finished with 10 total tackles, nine of which coming in the first half. Arriola had worked his way up the depth charts through practice despite being a newcomer to the program.

“I just try to do as much as I can and I give it my best. I came out with that mindset from the first practice and the coaches just saw that I can fit well with the team,” said Arriola.

Dolphin running back Noah Rosalin earned the biggest gain for his team in the 4th quarter, netting a 15-yard run. Rosalin finished with just nine net-yards on seven carries. Quarterback Jared Gomez threw 4-of-8 for 25 yards.

FD will host the Sanchez Sharks next Saturday at UOG while Southern welcomes the Tiyan Titans.