The FD Friars played well on both sides of the diamond as they defeated the Sanchez Sharks in the semifinals Wednesday to advance to Saturday’s title game. 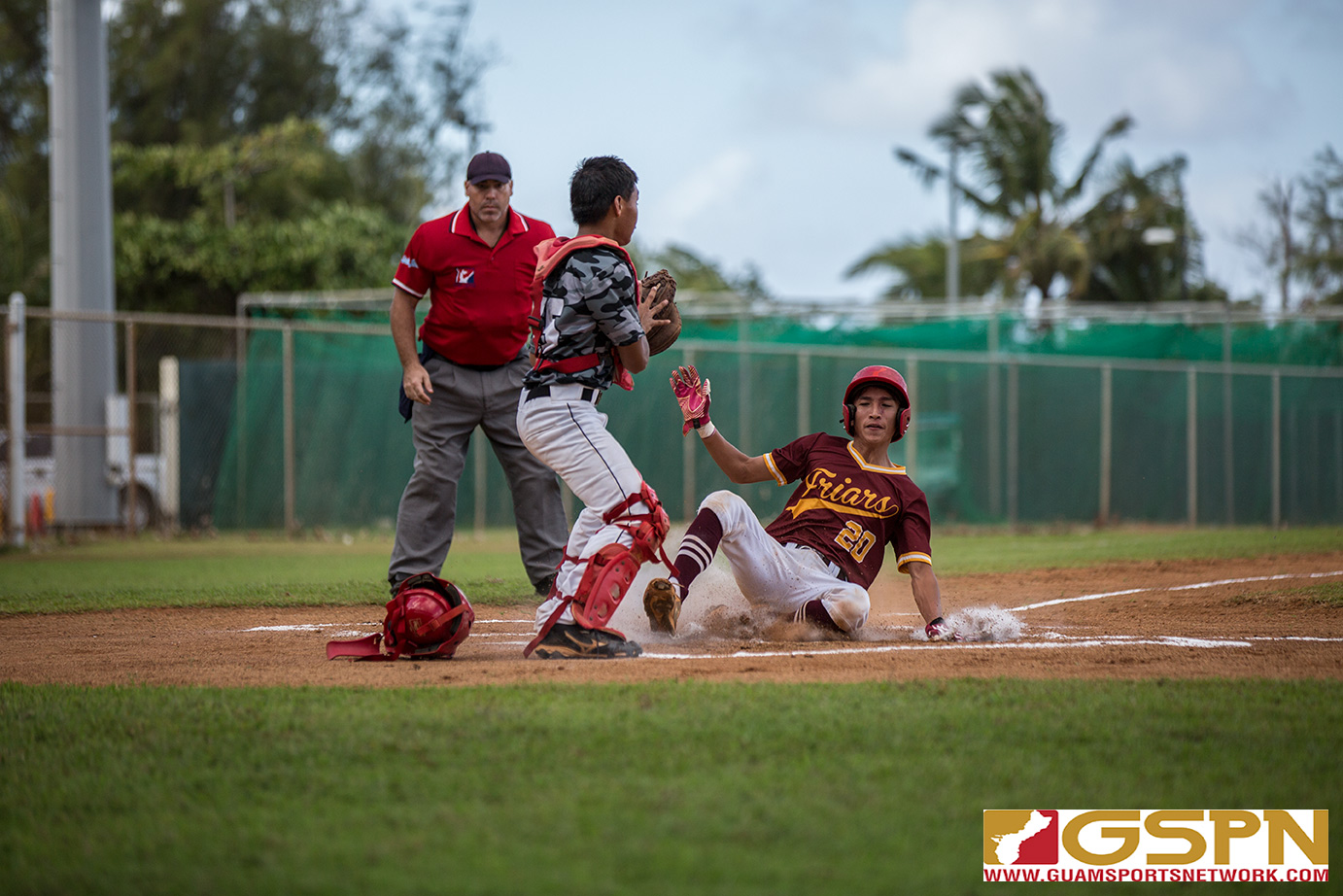 The Friars and Sharks faced off at Paseo Stadium Wednesday afternoon in the semifinals of the IIAAG baseball playoffs. The game ended up being called after five innings thanks to the mercy rule, with the score totalling 14-4.

The GW Geckos won their matchup against the Tiyan Titans 19-11, setting up a Friar vs. Gecko clash for the league title.

Both teams looked sharp as nails in the first inning, as no hits or runs were allowed, thanks to the defenses on both sides.

“There were a lot of errors to help us out, and nobody has played on this field so that’s a big factor,” said the Friars head coach, “we just put the ball in play, try not to put the ball in the air.”

Sanchez scored four of their own runs, three of which were scored in the top of the fourth when slugger Sigi Sanchez hit an RBI double.

The first inning was full of suspense, due to pitchers on each team leading their respective sides to sharp defensive efforts, causing quick one-two-three stretches.

The bottom of the second inning is when the action began. Six FD runs were scored in this part of the game. These runs came off of a set of five RBIs. The first RBI came from Ethan Lobaton, who hit an RBI single, sending Kai Akimoto home. The next was an RBI double hit by Jake Carbullido. The last RBI which sent three runners to home plate was hit by Nicolas Charfauros. The score at the end of this inning was 6-0, Friars looking very dominant.

In the top of the third, Sanchez scored a single run. This was scored by Daniel Blas, after he hit an RBI double, sending Tyler Santos home.

The top of the fourth brought forth a triple set of Shark runs. These were scored when Sigi Sanchez hit an RBI double, allowing three baserunners to score. The score after this burst of energy was 8-4, Sanchez inching back.

Despite being scored on big time, FD scored five runs to regain the margin of victory in the bottom of the fourth. These runs were scored after Nicolas Charfauros stole home, setting off a chain reaction full of RBIs. The score after this was 13-4, FD just one run away from setting off the mercy rule.

FD completed the hold on Sanchez to secure their close score.

The walk off run was scored in the fifth inning by Jake Carbullido, who hit a walk off RBI to shallow left field. This ended the game.

The Friars are headed to the Championship game on Saturday at Paseo Stadium and will play the winner of the Tiyan/GW game.

The Sanchez Sharks battled the top seeded FD Friars Wednesday at the Paseo Stadium in the IIAAG semifinals. (photo by Michael Ebio)

The Sanchez Sharks battled the top seeded FD Friars Wednesday at the Paseo Stadium in the IIAAG semifinals. (photo by Michael Ebio)