Tiyan toppled one of high school football’s biggest titans Saturday, earning the schools first ever victory over the GW Geckos. 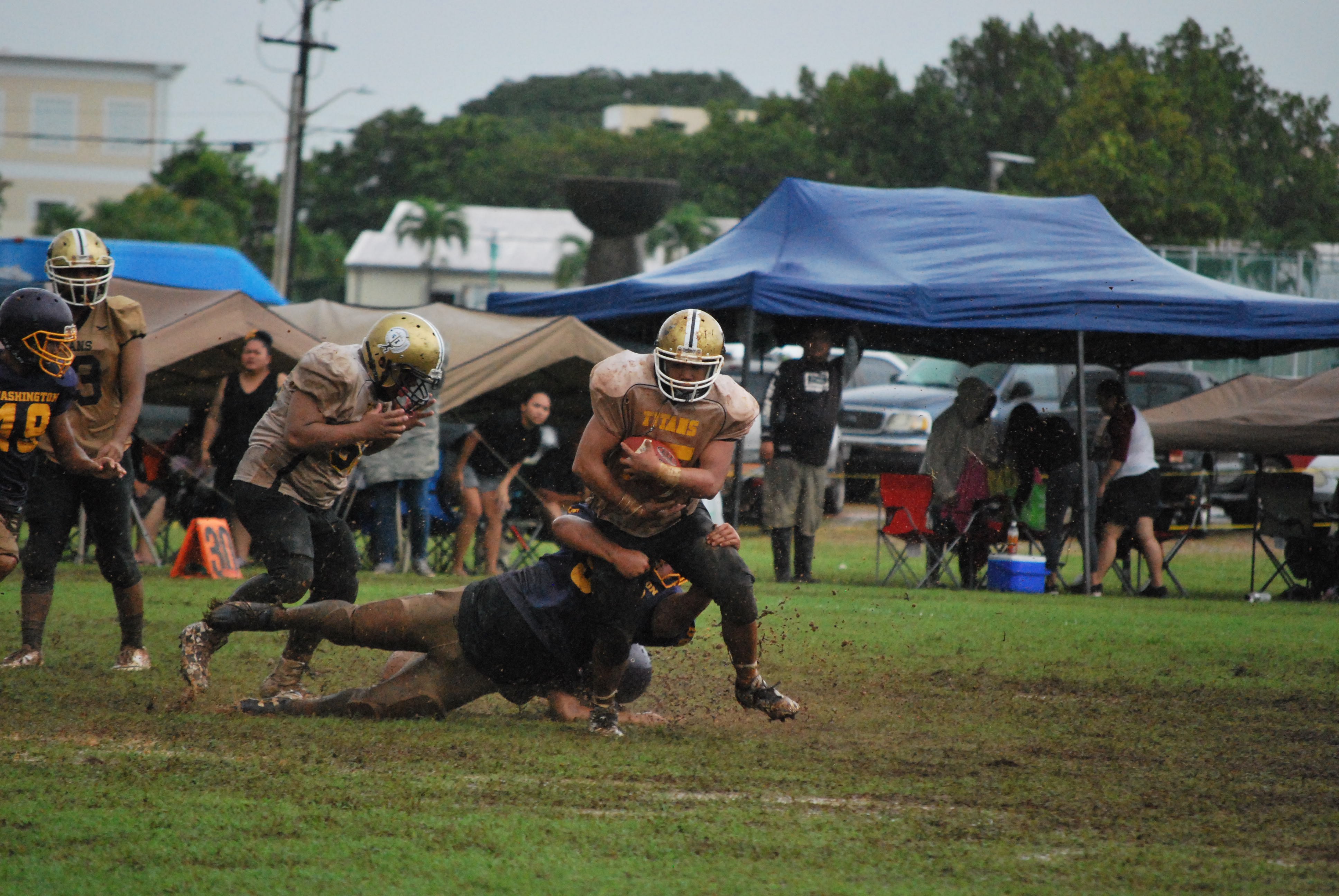 Before their Saturday afternoon matchup, many sports fans would not have thought the Tiyan Titans were capable of defeating the GW Geckos in the IIAAG Football League. After all, the Titans started their season 0-2 and were up against the best team in the last decade.

Tiyan, in just it’s third year in the league, came into the game ready to play and did everything right to not only win the game but completely shut out the Geckos 17-0.

“It feels good to win today. We came into the season not worrying about what the teams we challenged did in the past; we tell ourselves it’s a different team and a new season”, said Tyler Pangelinan.

Pangelinan scored the first touchdown of the game picking up a fumble on the 10-yard line and dashing into the end zone for the score. He also kicked a field goal and converted on pair of extra point attempts to account for 11 of the Titan points against the Geckos.

The conditions were wet and muddy on the UOG field. Heavy rain poured for the entire game causing obstacles for both teams to hold on to the football in a game that featured eight total fumbles. The Gecko offense never got into any rhythm and only accounted for 123 total yards on offense.

The Tiyan defense may have been the cause for the GW offensive woes, forcing six turnovers as the Geckos never got into the red zone.

Wendy’s Players of the Game Tyler Pangelinan and Kobe Quiambao

The Titans made a statement early in the game with Franklin Babauta Jr. picking off GW sophomore quarterback Ricky Macias for an interception. The Titans had good field position but were unable to put up any early points with GW’s Devin Benavente recording a tackle for a loss and Jon Espino stuffing a pass attempt to give the ball back to the Geckos. Both teams were unable to score in the first quarter.

Gecko running back Jonah Garcia found some success on the ground advancing the ball to midfield but the Geckos were forced to punt on a fourth down situation. The Titans caught a break in the second quarter after a high snap went threw the hands of the GW punter and the Titans recovered the ball with good field position in Gecko territory.

Tiyan quarterback Kobe Quiambao found running back Fred Lumogda on a slant play and he looked to power his way into the end zone from 20 yards out. Lumogda was met by a pair of Gecko safeties and the ball was fumbled. Pangelinan picked up the fumbled football and dashed in from 10 yards out to put the Titans on the board.

“I went downfield to block for him (Lumogda) and i looked back and saw another defender come for him so i went back to give him some space. By the time i went back, another defender got to him and i saw the ball so i picked it up and split for the end zone,” said Pangelinan.

The extra kick from Pangelinan was good to get the lead up to 7-0.

On the ensuing possession, Macias completed an eight yard first down pass to receiver Aaron Jamanilla to move the chains for the Geckos. The Geckos looked to get some momentum but a sack by Tiyan’s defensive lineman Mike Pablo stopped the drive.

The Titans got the ball back with good field position and looked to score before halftime. Quiambao dropped back and looked to find an open receiver but Jamanilla intercepted the pass at the 10 yard line to end the threat. The Geckos trailed 7-0 at the break.

The Titans started the third period with Pangelinan rushing for 22 yards to enter GW territory. Lumogda kept the drive going, breaking two tackles for a 16 yard gain to get to the GW 28-yard line. This time, Quiambao found his target with Javier Lujan catching a screen pass for a 28 yard TD.

The Geckos trailed 14-0 entering the final period and were still unable to get the big play to cut the deficit in half. The Tiyan defenders were stingy and gave the offense good field position to allow Pangelinan to kick an 18-yard field goal to add insurance points. The game ended with the Titans celebrating a 17-0 win, their first of the season to improve to 1-2. The Geckos fall to 1-1.

“I really have to thank my line for doing a wonderful job,” said Quiambao. Quiambao completed five passes for 101 yards despite throwing two interceptions. “This win is a good confidence builder for the team, it should inspire us to work harder to put more numbers on the board,” said Quiambao.

“It’s a good win for us but we still have a huge amount of respect for the Geckos. Even if they have a rough start to begin their season, they will get better because their coaches will work them super hard,” said Pangelinan.

Jamanilla had two incerptions for the Geckos and also had a game high eight tackles. Garcia rushed 13 times for 49 yards, Kastino Engichy had six rush attempts for 17 yards for GW.

The Titans will look to make it two in a row and will take on the Okkodo Bulldogs next week. GW will look to bounce back against the Sanchez Sharks.