The St. John Lady Knights put their 4-0 home winning streak on the line against the GW Geckos, as the IIAAG Girls Volleyball season rolled on Saturday night. The visiting Geckos came into this contest on a four game winning streak, looking for number five. 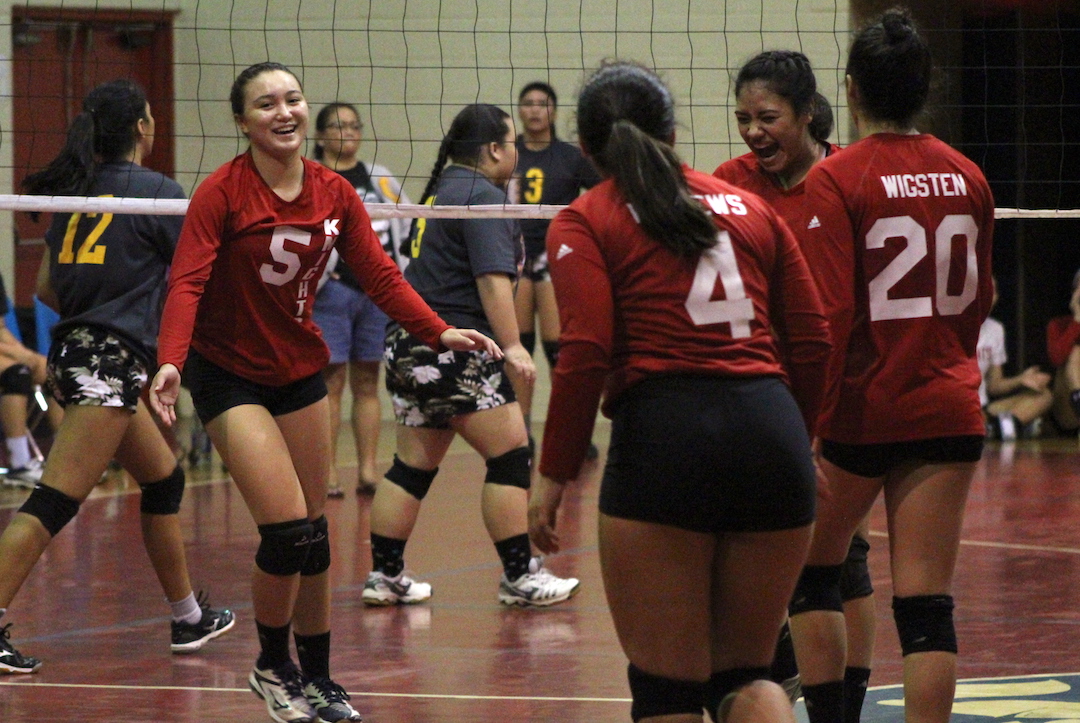 The St. John’s Knights put their 4-0 home record winning on the line against the GW Geckos, as the IIAAG Girls Volleyball League rolled on Saturday night. The visiting Geckos came into this contest on a four-game winning streak, looking for number five.

The Knights had other plans. St. John’s mounted a charge early as Angeline Del Carmen and Caitlyn Niu helmed a powerful front line. Youth prevailed for the red and white throughout, freshman Tylee Shepherd showed up in a big way and sophomore Hallie Wigsten.

Shepherd gave the home crowd a show closing out the first set with back to back kills, and followed that with a repeat performance to close out the deciding set with the same. Back-to-back kills that left the gym floor shaking.

Youth prevailed throughout this game, thanks to freshman up and comer Shepherd.

“We’ve really been working hard and pushing ourselves. Being a freshman, it’s kind of like pressure on me to make sure I do the best throughout the games. My teammates are the one who really push me and my coaches to excel and that’s how I’m able to play my best during the game.”

Regardless of nerves, the young outside hitter also attributed team chemistry to the victory.

“I played with these girls before when I entered my sixth grade year, it’s kind of the same team. Everyone’s very supportive and we don’t let our mistakes get to us.”

Shepherd’s power was on display for the entire Dale J. Jenkins Gymnasium to see. Tylee notched crucial kills in the first, closing the set out with two perfectly timed and placed strikes. The Tylee Shepherd show continued in what would be the deciding set.

St. John’s was able to ride the momentum from the first set into the second. Shepherd seized every opportunity given and the result, two back-to-back kills to end the game. Just like dejavu, Caitlyn Niu contributed with two big blocks to save what would be GW points and towards the end snapped off two aces in a row.

Del Carmen was solid for the Lady Knights on the defensive side of things. Del Carmen stuffed big hits at the net to help deflate the normally high octane Gecko offense. St. John bounce’s back to take it in two straight against GW 25-19, and 25-17.