TITANS LOCK UP 2ND SEED BY SHUTTING DOWN ISLANDERS

The Tiyan Titan football team will enter the IIAAG playoffs as the second seed. No, that wasn’t a typo; the Titans earned that second seed after defeating the JFK Islanders 14-0 to end their season winning five straight games. 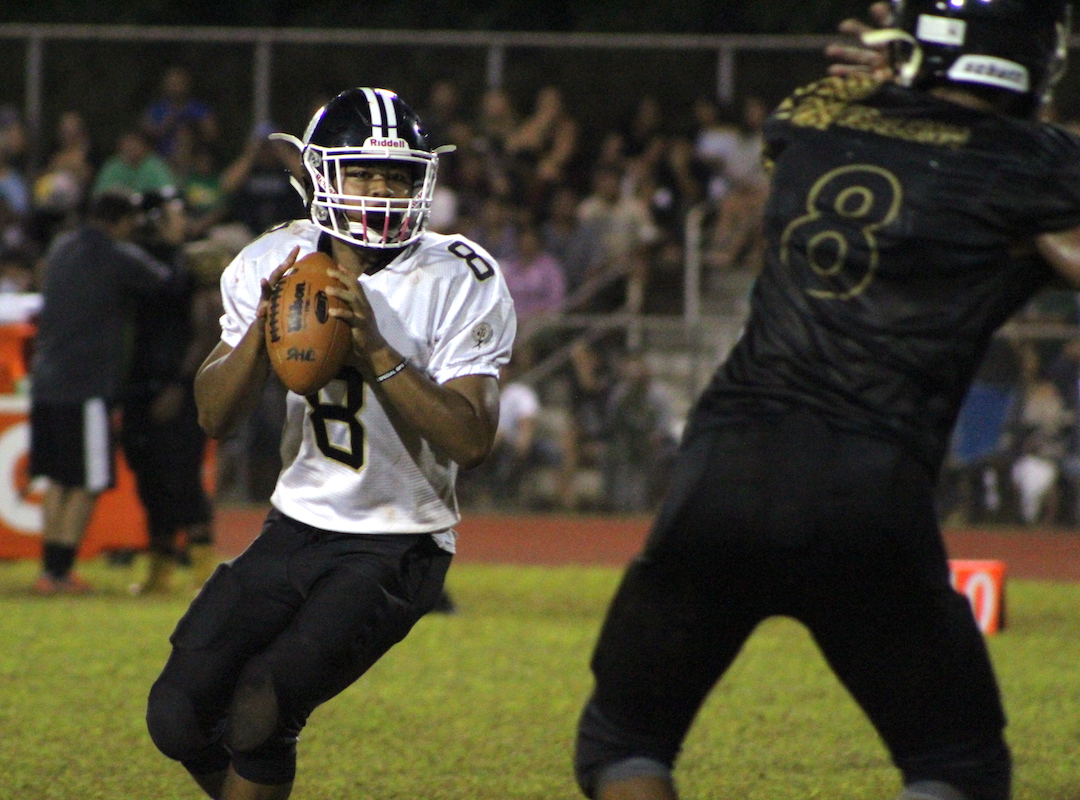 The Tiyan Titan football team will enter the IIAAG playoffs as the second seed. No, that wasn’t a typo; the Titans earned that second seed after defeating the JFK Islanders 14-0 to end their season winning five straight games. After dropping their first two games of the season, the Titans overcame the odds and catapulted their way to the second seed in just their third season in the league.

“All we’ve been doing all season was proving people wrong. But that’s not what we are here to do; we are here to have fun and enjoy the game,” said cornerback Mark Laanen. “We are just a new school that entered the league and we wanted to show that we can step up our game too.”

Laanen recorded Tiyan’s longest touchdown in the schools three year history with a 98-yard score, but it wasn’t on offense. Laanen was at the right place at the right time, picking up a JFK fumble at the goal line and dashing down the left sideline for the first TD of the game. The extra point by Tyler Pangelinan was good to make the score 7-0.

Prior to the fumble recovery, the Islanders looked unstoppable on the ground on their opening drive. Justin Camacho and Chase Spotanski took turns on run plays as the Islanders quickly entered Titan territory, marching 67 yards to the two yard line. Momentum quickly shifted after a combined tackle by Wiber Cruz and Tino Muna forced a goal line fumble as the ball bounced into the hands of Laanen for the score.

“We needed to make a big play, I just saw the running back come my way and I reached my hands for the ball to get the strip,” said Muna.

Later in the quarter, the Titan defense made another big play as the Islanders looked to tie the contest. Camacho continued to find success on the ground with JFK recording two first downs to start their drive. The drive was stopped with the Titans forcing another fumble which was recovered by Bryen Carbullido to give the ball back to Tiyan.

The Titan offense, led by quarterback Kobe Quiambao, took over with good field position and managed to score on a 19-yard pass play to receiver Andrew Blas to push the lead to 14-0 to end the quarter.  After two costly turnovers in the first quarter, the Islanders took the field in the second quarter looking to turn get into the end zone.

JFK Quarterback Allen Blend II completed a pass to Deante Delgado to start the second quarter. After two run plays, the Islanders looked to go to a pass play again but the Titan secondary was ready with Muna intercepting the pass to give the Titans another go at adding more points on the board.

Quiambao completed a pass to Pangelinan on the ensuing play but was injured after picking up 11 yards and did not return to the contest after suffering an ankle injury.  The Titans were forced to punt after JFK’s Matt Da Rosa sacked Quiambao for six yard loss. The Islanders looked for the big play before halftime but an interception by Titan safety Trifon Valencia prevented JFK from entering the red zone. The halftime score remained 14-0 after both defenses prevented scores.

The Islander defense made adjustments in the second half and held the Tiyan offense scoreless for the rest of the game. Spotanski recorded the second JFK sack for a nine yard loss and Lawrence Tisalona made three tackles behind the line of scrimmage to stabilize the Titan running game.

The Islanders needed a big play on offense entering the fourth quarter but the Titan secondary was a ‘no fly zone’ picking up two more key interceptions to secure the win. Muna picked up his second INT of the game and Isaiah Clemons also grabbed an INT in the fourth quarter for the win.

“The defense set the tempo for us tonight,” said Tiyan head coach Danny Cepeda. Pangelinan and running back Javier Lujan suffered injuries and were sidelined for the second half, but Cepeda’s defense stepped in to prevent JFK from scoring.

“We’ve been cellar dwellers for the last two years but I have good senior leaders that help the team. We started the season 0-2 and everyone counted us out but the leadership from all my seniors helped us finish strong”, said Cepeda.

Muna, a senior, earned the Wendy’s co-players of the game honors with the forced fumble and two interceptions for the Titans, he also recorded seven tackles. Quiambao, also a senior, completed 6-of-12 passes for 35 yards and had a touchdown pass to Blas. Blas had two receptions for 25 yards; Javier Lujan had 43 yards rushing yards on six attempts for Tiyan. Carbullido had six tackles and the Titans’ lone sack of the game.

The playoffs begin this weekend.