FD vs. GW for the IIAAG League Football Title for the fourth straight year. Check in with both sides ahead of tomorrow’s big game! 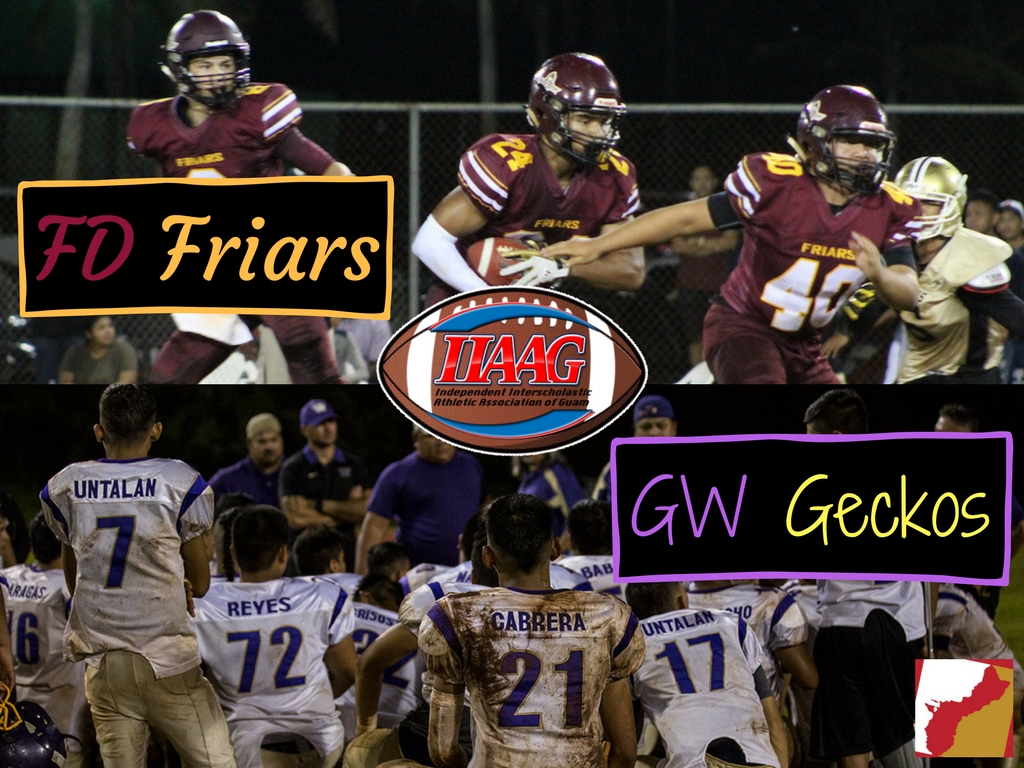 All the hard work is done; the last practice is complete. Now, it’s time to for the GW Geckos and the FD Friars to play for the IIAAG Football Championship for the fourth straight year in a row.

Will Sunday morning’s headline read ‘Friars cap off perfect season and win Championship’ or ‘GW pulls off the biggest upset in league history’? We’re less than 24 hours away from finding out.

Different year, same teams! The IIAAG Football championship game will once again feature the decade’s two powerhouse teams with the GW Geckos (7-2) and the FD Friars (9-0) battling it out once again for the League Title.

The Friars are undefeated this season and are riding a record 29-game win streak. FD has the top offense and defense in the league so this is a no-brainer on which team is favored. However, anything can happen in the championship game, especially when going against an experienced GW coaching staff.

Two football legends will lead their teams with FD’s head coach Bruce Meno going against GW’s Ryan Rios in yet another championship game.

“The team has seen all facets of the game. We’ve experienced winning, losing and a comeback,” said Rios of the Geckos’ season. “Now, we are going against a juggernaut team but the boys have worked hard and they will do their best.”

The road to the ‘ship for the Geckos had some bumps with a wild comeback win against the Guam High Panthers in the quarterfinals. In the semi-finals, the Geckos avenged an earlier season loss to the second seed Tiyan Titans to stamp their ticket to the championship game. The championship game is familiar territory for the Geckos under coach Rios who has been to the final game in all but one of his 15-year tenure.

Calvin Aguon, Aaron Jamanila and Ricky Macias are key players that need to be flawless if GW hopes to pull off the upset. Jamanila scored a pair of game winning touchdowns and is a dangerous punt returner. Macias, GW’s sophomore quarterback sensation, threw for 14 touchdowns in the regular season and three in the playoffs but has yet to throw a touchdown against a stingy Friar secondary.

Aguon is an all-around work horse for GW with a rushing, receiving and passing touchdown in the playoffs.

“We cant make any mistakes against FD,” said Aguon. “We worked hard in practice and our goal was to get better and play our best in the playoffs which is the last three games of the season.”

FD has yet to be tested this season with Meno having offensive MVP Xavier Naputi, star running back De’Aundre Cruz and quarterback Daniel Phillips dominating at their positions. All three are seniors and will be playing their final game.

“I couldn’t ask to end my (high school) career with a better group of people. They are not just my teammates, they are my brothers,” said Phillips.

The stingy Friar defense has a several 1st Team All-Islanders on the squad with Isaiah Reyes and Rylan Napoleon racking up sacks and tackles behind the line of scrimmage. Macias’ passes will need to be accurate with the Friar ‘no fly zone’ lead by saftey Brandon Kinsella and defensive backs Kyler Valencia and Noah Diaz.

The Friars are well aware they are favored; but their mindset is focusing on the championship game instead of letting their record or their streak pressure them.

“We’ve been preparing for every game as if it was a championship so this week (in practice) is no different. We are going to try and control the line of scrimmage on both sides of the ball as that’s where is all starts and continue to execute in all three phases of the game,” said Phillips.

Phillips will have to face a much improved GW defense anchored by linebacker Jerome Quichocho. Quichocho said that his team will also enter the championship game like it’s any other game with no pressure.

“This whole season we’ve been working hard in practice and we just needed to learn from our mistakes and get better,” said Quichocho. “This is my first year playing high school Football, I’m excited for the championship,” said Quichocho.

The game starts at 3pm at the UOG Football Field which is located behind the Field House.