The Academy Cougars rode a big performance from Mia San Nicolas as they topped the Southern Dolphins. 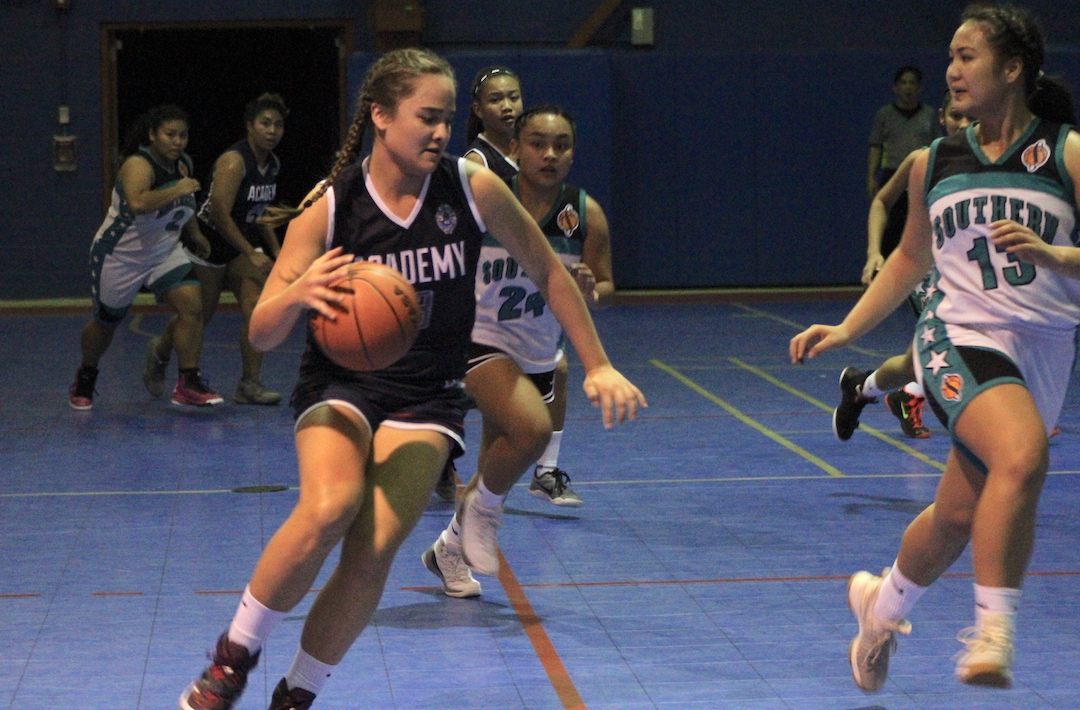 Cougar junior center Mia San Nicolas is making up for lost time in the IIAAG after missing all of 2016 with a knee injury as she racked up an impressive 26 points and 19 rebounds in the teams 56-35 win over the Southern Dolphins in the stand-alone Thursday evening basketball game.

San Nicolas did most of her damage in the 3rd period as she helped turn a close 33-22 halftime score into a huge 45-25 advantage, scoring 15 of the teams 18 points in the quarter.

“I just had to adjust and settle into my game. My teammates did a good job of finding me the ball and I executed well,” said San Nicolas of her strong performance.

Teammate Meghan Cruz, who also missed all of 2016 with an injury, had nine points and eight rebounds while Southern was led in scoring by Edrianna Lorenzo’s 12 points.

Right from the jump, San Nicolas made her presence known as she corralled a rebound and went coast-to-coast for an and-one play in the first minute of action. Teammate Cruz kept the Cougars ahead with strong play around the rim with Southern getting a pair of three pointers from Lorenzo to stay close 18-13 after the 1st quarter.

Mia then started to get her teammates involved in the 2nd period as she opened the quarter with a nifty pass to teammate Chloe Salas for a transition score, one of her four assists. A good defensive possession later, San Nicolas once again found a streaking Salas for another easy score before scoring on a post spin herself to rock a short 6-0 run to put the Cougars ahead 24-15.

The Cougars put their foot on the gas in the 3rd with San Nicolas giving the Cougars their largest lead 45-25 after a put back bucket.

Both teams emptied their benches in the 4th period.

For Mia, just being able to share the floor with her Cougar teammates after missing a year is special in itself.

“It feels great to represent my school again. I give a lot of thanks to my family, coaches and teammates for helping me through it all,” said San Nicolas.

Clowe Mantanona is met by the Cougar defense. (photo by Robert Balajadia)

Cougar Mia San Nicolas puts the ball on the floor as she attacks the rim. (photo by Robert Balajadia)

Cougar Chloe Salas brings the ball up court in the 1st half. (photo by Robert Balajadia)

Cougar Kirsten Silva gets loose on a fastbreak. (photo by Robert Balajadia)