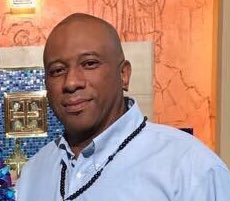 Thompson was in attendance, like he is in all his Friar home games, to his Friars hosting the ND Royals in boys volleyball at the Phoenix Center. After the game, Thompson had collapsed and was said to be unresponsive before he was rushed to the Naval Hospital where he was pronounced dead.

His family, friends and a wave of FD Alumni all rushed to Naval Hospital after receiving the shocking news of Thompson’s passing. Another wave of current and former Friar students took to Twitter to pay their respects to the Thompson family.

Thompson was also the President of Guam Basketball and served as the Friars Vice Principal well over a decade before becoming Principal in 2016.

Tony is survived through his wife Angela, son and two daughters. Thompson’s influence spans over three decades worth of FD Friar traditions.