In a thrilling matchup that was decided in the game’s final seconds, the GW Geckos pulled off the first upset of the IIAAG Girls Basketball playoffs by stunning the home team Okkodo Bulldogs 46-45 behind a clutch performance from Bila Aguon. 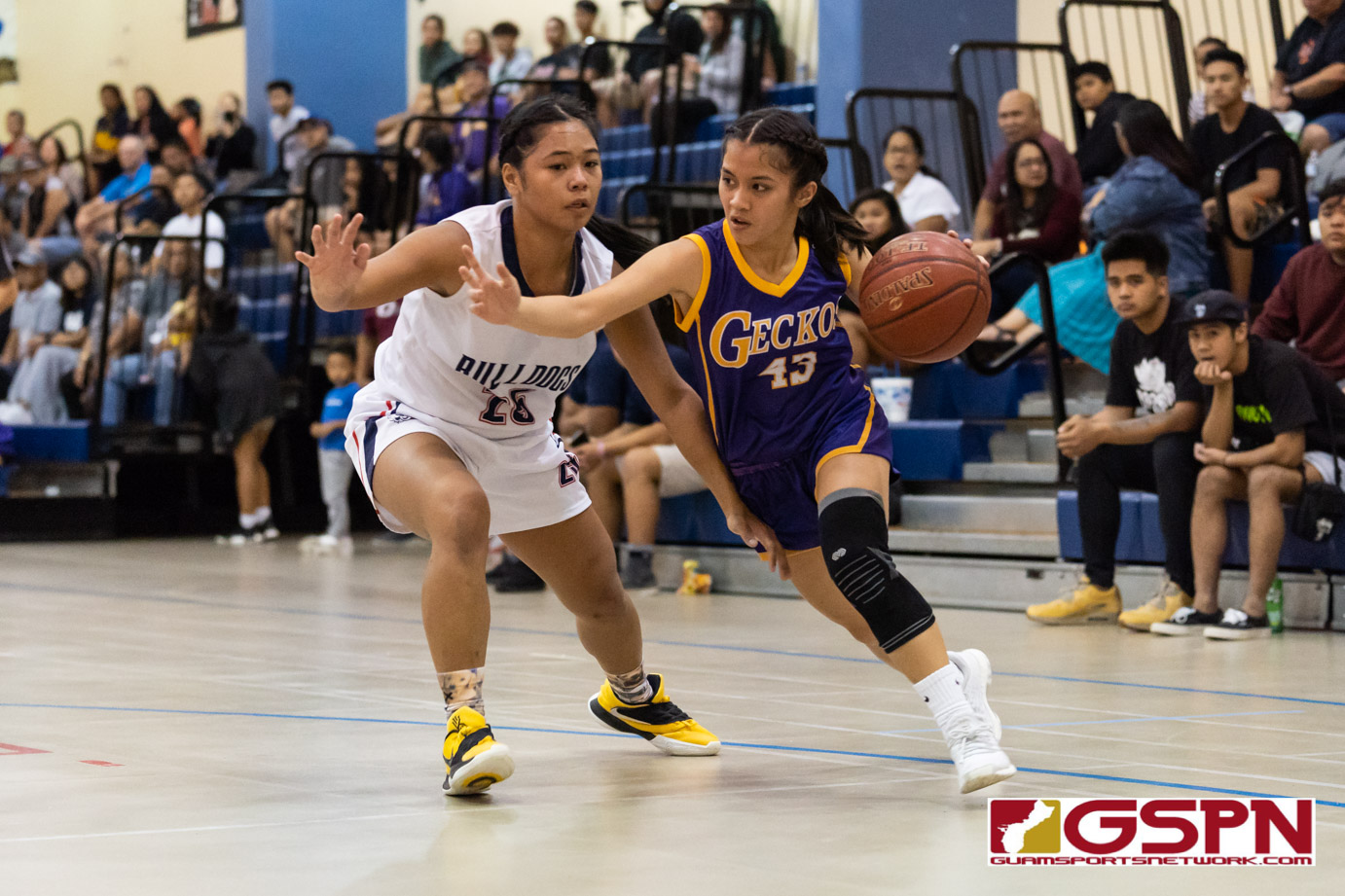 In a thrilling matchup that was decided in the game’s final seconds, the GW Geckos pulled off the first upset of the IIAAG Girls Basketball playoffs by stunning the home team Okkodo Bulldogs 46-45 behind a clutch performance from Bila Aguon. The game was highlighted by several lead changes and featured an array of threes and interior action.

With 1:40 left to play in the 4th Quarter, the Bulldogs only lead by one at 43-42. Okkodo decided to milk the clock early and did not look for any opportunities to score. With 12 seconds left to play, it looked like their strategy would pay off as sharpshooter Racquel Camacho was fouled and sent to the line, sinking two free throws to give her team a three-point lead.

Wendy’s Player of the Game: GW Geckos Bila Aguon scored 22 points in a thrilling match against the Okkodo Bulldogs. Aguon hit clutch free throws to give her team the lead in the games final second, defeating the Okkodo Bulldogs 46-45. (Photo by Michael Blas)

But an inside look by Geckos Power Forward Mari Paet would shrink the lead back to a single point. She was fouled on the play with an opportunity to tie the game at the free throw line with only 2.3 seconds left to play. The shot missed and Bulldog Vaneeza Gustilo grabbed the board, but Geckos Aguon fought for possession. A loose ball foul would be called on Gustilo, sending Aguon to the line with only 0.2 seconds left to play trailing 45-44.

The Geckos crowd was ecstatic but tried to keep quiet as Aguon went through her shooting routine. The first shot fell. And so did the second.

The Geckos had no room for complacency, as the Bulldogs had one more possession with 0.2 seconds to go. The Bulldogs had an entire full court press to worry about and could not get a look at the basket following the inbounds. The final buzzer sounded, and the Geckos upset the home team winning 46-45.

Aguon described what went through her mind during the free throws that gave her team the lead.

“I was trying to stay focused and not let the crowd get to me. I took a deep breath and thankfully the shots went in.”

Aguon had a dominant performance on both ends of the ball and finished the game with 22 points and two steals which spurred the Geckos comeback and earned her Player of the Game Honors. It was not just Aguon’s significant offensive contributions that led her team to victory, but also her aggressive defense on the perimeter throughout the matchup.

The Geckos held the lead from the outset and the Bulldogs did not obtain a lead until the final minutes of the first half. Aggressive play on the interior by Bulldogs center Angeli Dacanay allowed her team to claw their way back into the matchup and keep the game in single figures throughout.

Bila Aguon started the second half with high energy, pestering Bulldogs ball handlers and obtaining two steals in the first minute. She scored in transition on the second steal and a possession later drove to the left hashmark banking a layup.

Dacanay answered with a hook on the inside and kept her team within two at 22-24. Then a beautiful post move by Bulldogs D’shanae Cruz tied the game at 24-24. Sharpshooter Camacho rode her team’s momentum and hit a quick release 3 pointer taking the lead at 27-24. The Bulldogs would lead going into the 4th Quarter and dominated on the boards, out rebounding the Geckos 28 to 9.

Dacanay finished the game with 16 points and nine rebounds.

Geckos Alana Salas also had an impressive offensive outing and finished the game with 12 points while running the point. Alana’s ball handling technique was a treat for fans and had several crossovers that kept the defense on their toes.

“We were all motivating each other to keep the momentum going and we knew we could win the game as a team. We dedicate this game to our Uncle Chris, who passed away last year. He was our motivation for this game,” said Aguon.