In the first half of our IIAAG Football Preview Series, we take a look into the FD Friars, GW Geckos, Guam High Panthers and Tiyan Titans. The season is scheduled to begin Friday, August 24th @ 7 pm. 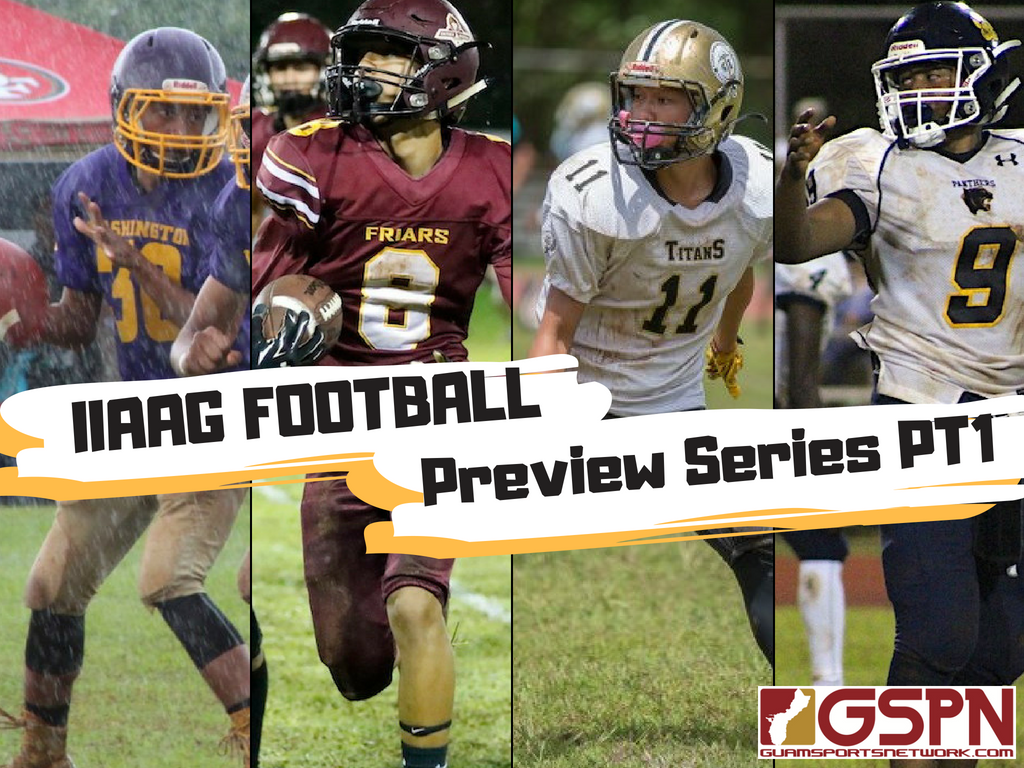 The 2018 IIAAG Football season is set to kick-off Friday evening on August 24th.

Before you head out to any of the action this weekend, GSPN will be launching a two-part series preview to highlight some important info on each of the eight teams competing for the IIAAG title.

The first half of our preview series takes a look into the FD Friars, GW Geckos, Guam High Panthers and Tiyan Titans.

FD lost a bunch of talent to graduation and the coaching staff looks to the next generation to fill the shoes of players currently gearing up to play in college.

“This season is no different than any other,” said Badua.

The Friars will be the largest team once again with 66 student athletes trying out for the team.The Friars go into every season with the same mentality and preparation is key.

“We work just as hard, if not harder, every summer in preparation for the season,” said Badua.

There is a total reconstruction from last season but look for key returnees Kein Artero at running back and Brian Anderson at receiver to make big plays for Meno’s offense. Badua, the defensive coordinator, will have Eugene Arriola at linebacker and Noah Diaz at defensive back to keep opposing offenses out of the end zone. One thing that is consistent every season for the Friars is the support of Friar Nation. FD fills the sidelines with supporters and look for the Friars to defend their championship in their opener against GW this Friday.

10 years. The amount of years the GW Geckos have been to the IIAAG championship game under the current coaching staff led by the ‘Chairman of the Board’ Ryan Rios. Leading the offense will be key returnees Ricky Macias, Aaron Jamanila, Ethaniel Cali and CJ Cabrera bringing experience from last year. The Geckos made it to the championship game last year against their rival Friars.

The Geckos will be missing big play makers Calvin Aguon and Jude Tenorio but chalk up another year of experience for returnees Macias (QB) and Jamanila (WR) to help put points on the board for GW. The Geckos open up their season this Friday (tentatively) against the Friars in a rematch of last season’s championship game. GW’s defense is led by key returnees John Espinal, Jerome Quichocho, Noah Quichocho and Rico Mandalang.

“This is the first year we have enough linemen to play on both sides of the ball so it frees up some of our players from playing two-ways the whole time,” said Dowdell on the biggest change to his team in 2018.

The team also is welcoming in some new talents from youth and transfers from Japan like AJ Johnson and a senior who goes by ‘Rhino’. The Panthers ‘Big Three’ will be in now seniors Jeylyn Dowdell and RaSean Jacobs and quarterback Travon Jacobs, who has fully healed from his injury suffered in the first game of his freshman season.

Some of the biggest additions aside from Panther players are those that make up his coaching staff. Dowdell is welcoming back his former All-Island players in LJ Aguon (2014 MVP) and Teagan Brown (2014 All-Island) to aide in 2018.

“It’s the biggest treat ever to have former players comeback and feel the need to give back. They both have had the opportunity to go out and play some college ball and now they’re coming back to give back to the kids from Guam, not just at Guam High. We do the ‘Guam Grind’ every Saturday so they share their knowledge across the board,” said Dowdell.

Head coach Danny Cepeda leads the hungry Titans in his second year as head coach for the high school. The Titans made history last season and went into the playoffs ranked second behind the FD Friars. The Titans looked promising with all-star quarterback Kobe Quimbao and wide receiver Tyler Pangelinan last season and defeated the GW Geckos.

“This year it’s back to square one for me and my coaching staff. Last season we had the luxury of having 22 seniors,” said Cepeda.

John Angoco will be the starting quarterback for the Titans and he will have options with speedy wide receivers Davin Mojica, Trifon Valencia and Ryan Johnson. The backfield consists of Kiomasa Kaminga and Travis Benavente.

On defense, the secondary unit of Jude Cruz, Vincent Gamallo, and Sandy Malalis will look to keep opposing receivers at bay. The D-Line will consist of Davieon Siguenza and Kolby Corpuz who will also see double duty at linebacker.

“Our goal like everyone is to make it to the playoffs and try and make it to the championship game this upcoming high school football season,” said Cepeda.