This past Sunday, round 8 of the ten round 2018 Monster Energy Guam Motocross Championship was held at the Guam International Raceway located in the northern village of Yigo. 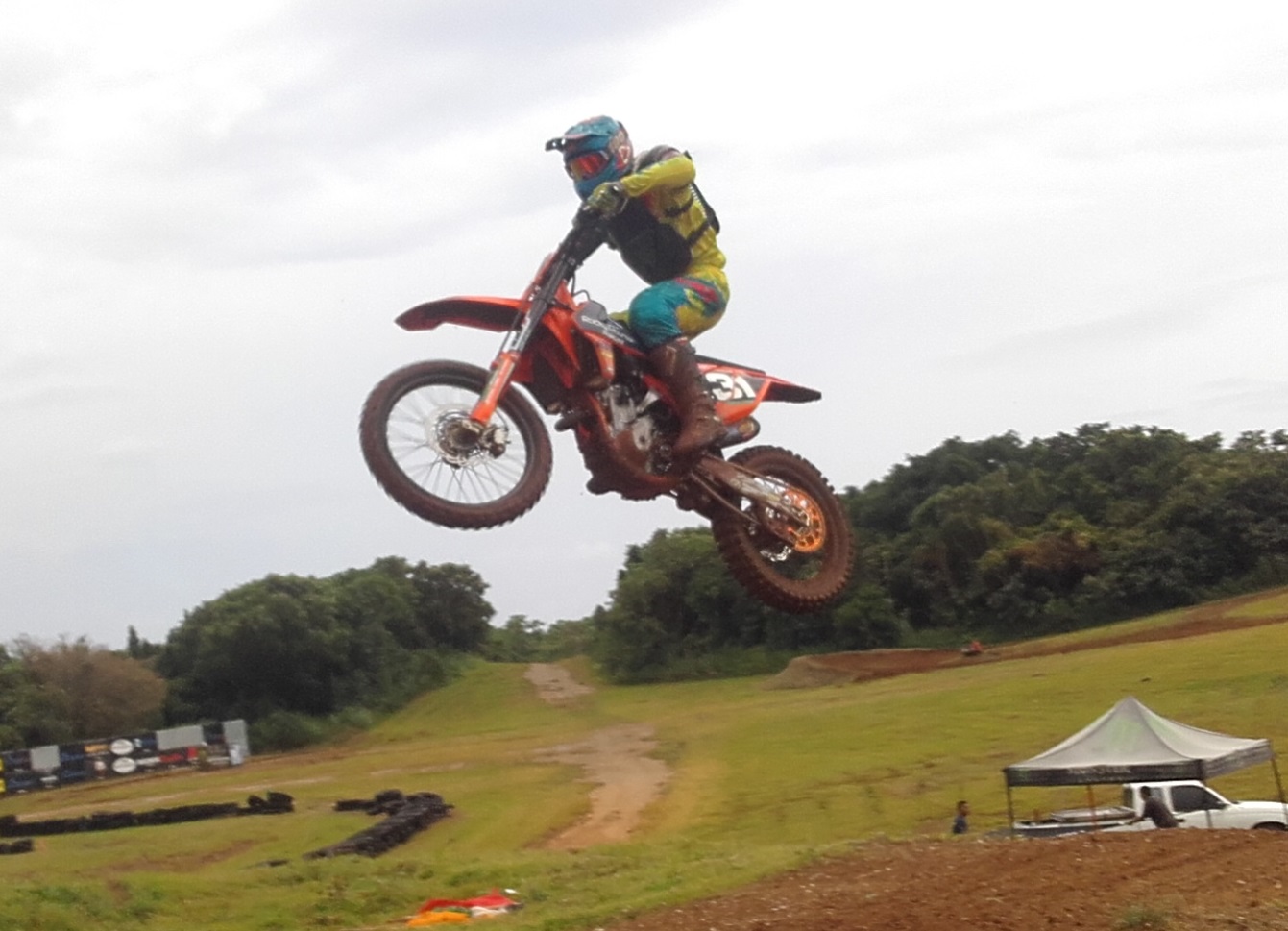 This past Sunday, round 8 of the ten round 2018 Monster Energy Guam Motocross Championship was held at the Guam International Raceway located in the northern village of Yigo. The field of competitors included both several mini bike and atv youth classes ranging from ages 4 years up to 15 and also by the full sized machines of the Open Atv and Motorcycle classes that saw competitors ages ranging from 16 years and up. Racing kicked off at noon under overcast skies and with the Open Atv class taking to the challenging jump filled course first.

In the Open Atv class right off the start it was the #4 Robert Bucek aboard the Cycles Plus Suzuki getting to the first turn ahead of a snarling pack of Yamaha Raptors who quickly shredded the first turn lead of Bucek leaving the Cycles Plus rider back in 5th as they headed down the first straight. With mud slinging and toads leaping for their lives #75 George Santos tore through the course on his Yamaha taking the lead and proceeding to put distance on the rest of the field. Early on in the heat it was #22 of Ken Tedtaotao running in second, third was #64 George Santos jr. with #24 Cameron Chaco in fourth being challenged by the #4 of Bucek. Bucek then began a charge and was able to quickly pick off the #24 of Chaco when Chaco began having engine problems. Bucek then made a quick pass on both the #64 of Santos jr. and the #22 of Tedtaotao to put himself into second but with time running out in the first heat was unable to catch the eventual heat one winner #75 George Santos.

In the second half of the event, heat two, the #75 of Santos and the #4 of Bucek went back and forth right out of the gates swapping the lead with Santos using the power of the 700cc Yamaha Raptor to muscle his way past Bucek for the lead. Bucek then using his decades of championship experience started picking the better lines around the course eventually reeling in the #75 Raptor of Santos. Once caught Bucek then went on to make the pass on Santos to take the win with the #75 of Santos finishing in second. With his second and a first place finish Bucek steals the overall round 8 win from the #75 of Santos who had a first and second place finishes for a second overall. Taking third was the #22 of Ken Tedtaotao with the #64 of George Santos jr. in fourth. Rounding out the top five was #24 Cameron Chaco who had suffered from mechanical issues.

In the Open Motorcycle class #31 Tim Wenden aboard the Rocky Mountain Precast supported Ktm took the lead in both the two heats right from the drop of the gates. With the overcast skies letting loose a torrent of rain that was falling more horizontally than vertically the #1 of Lil Jon Aguon aboard his Ground Tech Services supported Yamaha challenged the early leader Wenden. The two seemed oblivious to the stormy conditions as they soared over the jumps and skimmed and sliced their way through the wet mud infested course. At the checkers it was the #31 of Wenden taking the win in both heats to sweep for the round 8 overall victory. The #1 of Agoun took second with #21 Jon Agoun in third, #59 Robert Terrel in fourth and the #75 of Jeff Rios rounding out the top five in fifth.

In the Open Minibike class #23 Jordan Leon Guerrero aboard the LG Racing Kawasaki took the class win with #25 Lawrence Limtiaco on a Kawasaki in second and #31 Richard Wenden on a Rocky Mountain Precast supported Ktm placing third.

65cc Kids Minibike class first was #22 Wyett Santos on a Kawasaki, second was #31 Richard Wenden on a KTM, third was #12 Gabriel Calvo on a Kawasaki, and taking fourth was #33 Mariana Wenden.

50cc Kids Minibike class first ent to the #18 of John Aguon on a KTM, Jace Calvo took second on a KTM, and third was #109 Leo Limtiaco on a Honda.

Kids Mini Atv class it was #2 Wyett Santos taking the win, second was #27 Camerish Chaco with #12 Gabriel Calvo in third after a mechanical issue.

Next up on the motocross race schedule will be round 9 of the 2018 Monster Energy Guam Motocross Championships on Sunday September 2nd. Gates open at 9am and the racing kicks off at 11:30am. Everyone is invited to attend to watch free of charge. Interested new or experienced riders are encouraged for more information to visit https://girmac.teamapp.com or contact public information officer Robert Bucek by call or text at 727-5381.