After three hours and 15 minutes of total game time, the Guam High Panthers celebrated a thrilling 13-6 overtime victory in the IIAAG Football League over the home team JFK Islanders. 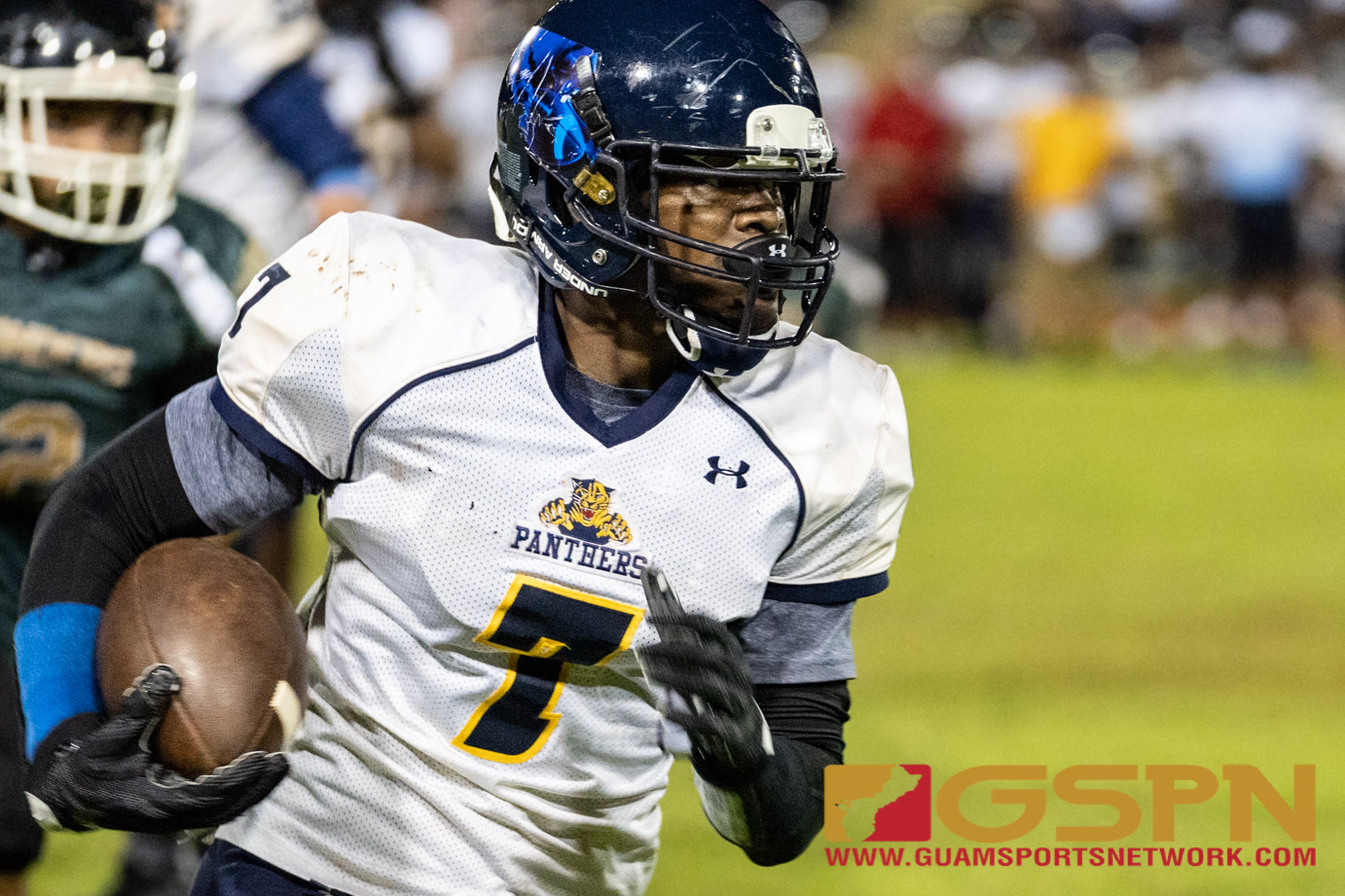 It was Probably the game of the year, so far. After three hours and 15 minutes of total game time, the Guam High Panthers celebrated a thrilling 13-6 overtime victory in the IIAAG Football League over the home team JFK Islanders. The game was halted for almost an hour in the second quarter after the ambulance had to leave the game to answer an emergency call.

Both teams had a shot to win the contest in regulation but in the end, an inspired Panther team dug deep to come out with the victory. Fast forward to the final possession in overtime, the Islanders attempt to extend the game with a touchdown but are stopped with an interception by Panther defender Kieran “Kai” Hood.

“I was just looking for the person who had the ball and I saw the quarterback so I attacked,” said Hood.

The Panthers played with a little more purpose for this game and dedicated the rest of their season to one of their coaches who had lost two family members in a tragic accident in the mainland.

“We did it all for our coach who had to fly out today who lost his Mom and Sister,” said Hood.

The Panthers won the coin toss after a deadlocked 6-6 contest in regualtion and took the field on offense first starting at the JFK 10-yard line (IIAAG overtime rules). The Panthers take two plays to advance the ball to the two-yard line and quarterback Travon Jacobs rushes in for the touchdown on a keeper. After a successful extra point attempt by Brennan King, the Panthers are up 13-6.

The Islanders take the field next at the Panther 10-yard line and have four attempts to score or it’s gane over. The Islanders gain just four yards in three rushes and are down to their final play with six yards to the end zone. The final play of the game features Hood making the interception.

The entire Panther team played with a little more purpose at JFK Friday night and were glad to win a battle for their coach.

Both defenses were strong in the first half with the game scoreless at halftime. JFK defensive anchor Chase Spotanski had four tackles at the break, containing the Panther ground game to just 45 yards by halftime.

JFK had more positive yardage in the first half but missed out on a golden oppurtunity after Spotanski fumbled the ball in the red zone to give possession back to Guam High. Guam High’s Drew Mestas recovered the fumble as the rain poured just before halftime to keep the Islanders out of the end zone.

With both teams unable to score in the first half, the Panthers needed a big play from their special teams entering the third quarter. Jalen Thach answered the call from coach Jacob Dowdell and executes a kickoff return play for a 91-yard touchdown.

“We’ve been running this play for quite some time. It was designed for me to run to the outside and I had alot of blockers who did their job. I couldn’t have scored if it wasn’t for the blockers,” said Thach.

After a failed extra point attempt by King, the score had Guam High leading in the third quarter 6-0. The Islanders threatened to score on the ensuing possession with running back Deante Delgado moving the chains for JFK.

The Islanders entered Panther territory but surrendered the ball on downs with RaSean Jacobs and Maxwell Lindfors making key tackles on defense. The clock was ticking on the Islanders and the backfield duo of Justin Camacho and Delgado come up huge with positive power runs in the fourth quarter to advance to the red zone.

JFK bullied their way to the one-yard line and Delgado powered into the end zone to tie the game with 9:30 left in regulation.

The Panthers got good field position but failed to get into JFK territory with defensive tackle Lawrence Tisalona preventing running backs Sincere Powell and Jeylyn Dowdell from moving the chains. The Panthers are faced with fourth-and-three situation and Islander linebacker Camacho made a tackle behind the line of scrimmage to give possession back to the Islanders.

The Islanders take over on the own 41 yard line with less than three minutes left in regualtion and march into Guam High territory after a pass interference call. Quarterback Andrew Perez launches a pass with under 30 seconds remaining and competes the pass to Juan Sarmiento for a huge 37-yard gain.

The Islanders are now on the Panther 13-yard line with 4 seconds left and decide to have Sarmiento go for the field goal. After a defensive offside call, the Islanders advance to the 8-yard line and it’s just a chip shot for the victory. Guam High gets a huge break after a bad snap ends the game deadlocked and the Panthers win the coin toss and the game in overtime.

RaSean Jacobs had a game high 11 tackles and also had 32 reception yards.

“It was rough in the beginning of the game but I knew my team had it in them,” said RaSean Jacobs. Jacobs’ little brother, quarterback Travon Jacobs, had the game winning touchdown in overtime. Travon Jacobs completed eight passes for 65 yards.

“He came up really big for us and he made me extra proud,” said RaSean Jacobs.

Powell had 42 yards rushing, Thach caught three passes for 31 yards. The Panthers improve to 2-2 for the season.

The Islanders suffer their second straight loss and drop to 2-2 for the season. Delgado had a bulk of the workload on offense with 26 carries for 128 yards and a touchdown. Camacho had eight carries for 51 yards. Quarteback Perez had 62 total passing yards. Spotanski and Tisalona had seven and five tackles, respectively, for the Islanders defense.