The FD Friars looked sharp on offense Saturday afternoon in a showdown up North against the Sanchez Sharks after a series of rescheduled action in IIAAG football. 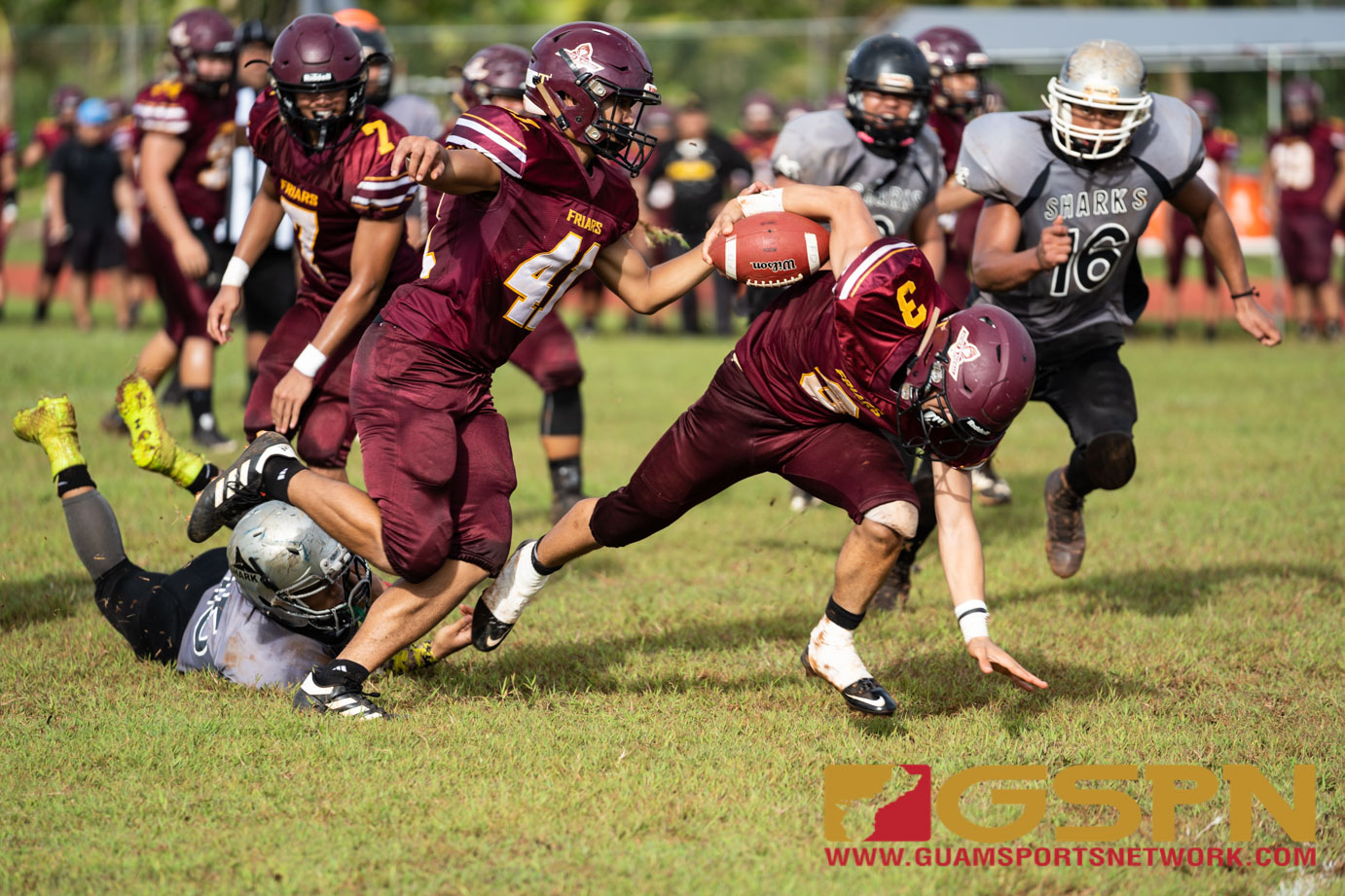 With the IIAAG dealing with setbacks all week long due to typhoon Mangkhut, football found its way to carry on Saturday in a double header at the Okkodo Field. The FD Friars defeated the Sanchez Sharks in the 3 pm game 28-8 and the Okkodo Bulldogs picked up their second win of the season over the Titan Titans in the evening game at 7 pm.

Saturday’s games were in question due to the field lighting, which had moved the Okkodo vs Tiyan match from Friday (Sept 14) to Saturday. The GW vs Southern game had to be postponed due to the setbacks.

Turnovers and penalties have plagued the Friar offense in the first three weeks of the season, but not a single turnover and no more than three penalties hindered FD Saturday afternoon.

Nick’s go-to target Saturday was brother Brian Anderson, who hauled in two catches for 60 yards and one score. Brian’s touchdown in the 2nd quarter came on a screen pass at the 47-yard line, which means 47 of those yards were earned after the catch.

“I just noticed that I could get past the defenders and I just ran as fast I could. I was only looking to get as many yards out of that play as I could,” said Brian on the touchdown.

“There’s still a lot more room to grow, but we’re getting better and we’ll get there,” said Nicholas.

Sanchez was led in rushing by Jeremiah Sablan, who broke through the FD defense for a 45-yard score on just his second carry. Sablan would finish the day with 81 total yards with the lone touchdown.

The Friars came out passing on their opening drive with Anderson converting his firs two attempts, which was a 26-yard pass to Joshua Calvo followed by the 15-yard score to Leon Guerrero. Sanchez punt on 4th down which set up Artero’s first strike from 75 yards out to put FD up 14-0, who were also forced to dip into their third string kicker in Calvo after starter Sean Sablan went down and their backup down with an illness.

Just before the 1st could end, Sablan would gash the Friars for the Sharks lone touchdown from 45 yards out, with teammate Kamerin Toves punching in a 2-point conversion to get within 14-8.

FD struck quickly in the 2nd quarter as Nicholas hit brother Brian on a screen pass, and Brian would beat the defense on the edge to put FD up 21-8.

Artero’s last touch would end in a 55-yard score, but a 50-yard kick return would put the young star over 200 all-purpose yards for the fourth time this season.

The Sharks only attempted three passes all game with their run-heavy offense chewing up game clock.

Despite playing their first day time game, the Friars were a little more comfortable than the heat would allow.

“We always practice during this time so we were already used to this. From here on out, we have to work harder and be more disciplined,” added Anderson.

FD will take on the Okkodo Bulldogs next Saturday while the Sharks will play the Guam High Panthers.