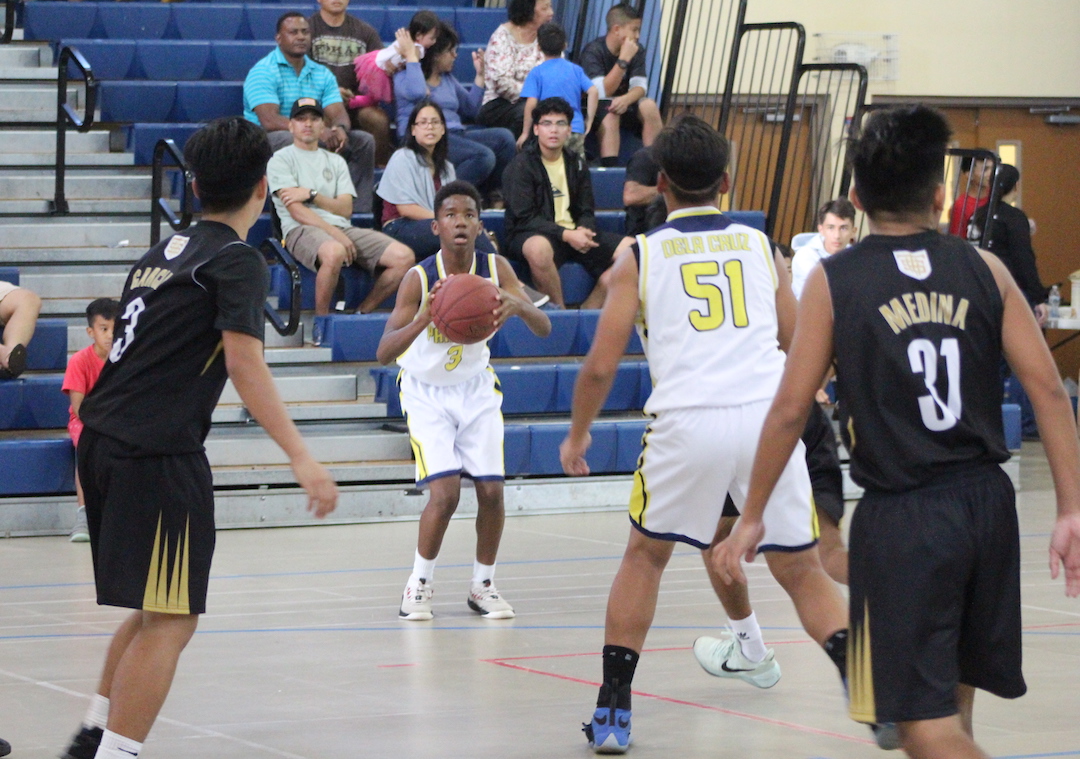 GBC held the tournament after the IIAAG season to determine a champion. This is the fourth year of the tournament hosted by GBC, the highest governing board for basketball in the region. Action started in the afternoon and carried into the early evening as teams started the double elimination format.

JFK, Tiyan and both Okkodo teams (Okkodo A and Okkodo B) advanced to the winners bracket. Basketball will resume on Wednesday at Okkodo due to the semi-final games played on Tuesday evening.

The JFK Islanders were on fire from down town, draining 12 three-pointers to send the GW Geckos to the losers bracket. Jobi Saimon hit four 3-pointers for JFK as they defeated the GW Geckos 68-30. Edmund Palacios led the Geckos with 11 points. Ralf Manalac led all scorers with 13 points for JFK.

The Okkodo B team avenged a regular season loss against the Friars and defeated the bigger team 54-39. Nicolas Panganiban and Jon Michael Lorena led the offense in the second and third quarter as the Bulldogs maintained a double digit lead.

“We are going to do our best to win this tournament. It helps that we play (the first day) in our home court, we practice here and it is an advantage,” said Panganiban. “We learned from our loss against FD in the regular season and came into this game with a better mentality,” said Lorena. Lorena forced turnovers in the paint, handing the Friars the worst loss of the year. Raymond Castro led FD with 12 points.

“Our defense will help us win this tournament,” said Tiyan’s Ian Asuncion. The Titans held the Guam High Panthers to just two points in the first six minutes of regulation to get the win.

Laurence Decano said everyone contributed to the win and he looks forward to challenging other teams in the tournament.

“We look to get better as the season continues with good teamwork.”

Decano scored seven points in the second half to help his team secure the victory. Asuncion had a team high 12 points to lead the Titans. Dillen Dela Cruz scored a game high 17 points for the Panthers.

Alvin Aromin and Tristan Valdez each scored eight points to lead the Bulldogs offensively. The Bulldogs led 30-21 after three quarters before the Sharks made a comeback in the final period.

Sanchez had a shot to tie the game with 30 seconds left in regulation but a moving screen (offensive foul) gave possession back to the Bulldogs and they made all their free throws down the stretch to advance to the winners bracket. Julio Devera scored 11 points to lead the Sharks, Ivan Perez chipped in eight points.

GW’s Edmund Palacios scored 20 points in the second half to help the Geckos win a come from behind victory over the ND Royals. The Royals were eliminated after the loss.

The Geckos trailed by six points in the final five minutes of regulation but managed to take the lead late in the game. The Royals had two attempts in the final seconds of the game to win but came up short.

Palacios had 22 points total, 20 in the second half to keep GW ‘s season alive. Nolan Sablan scored 20 points for the Royals.