In the third week of GNYFF football, the Island Eagles would successfully defend their home field in their Manha matchup with against the visiting Broncos. 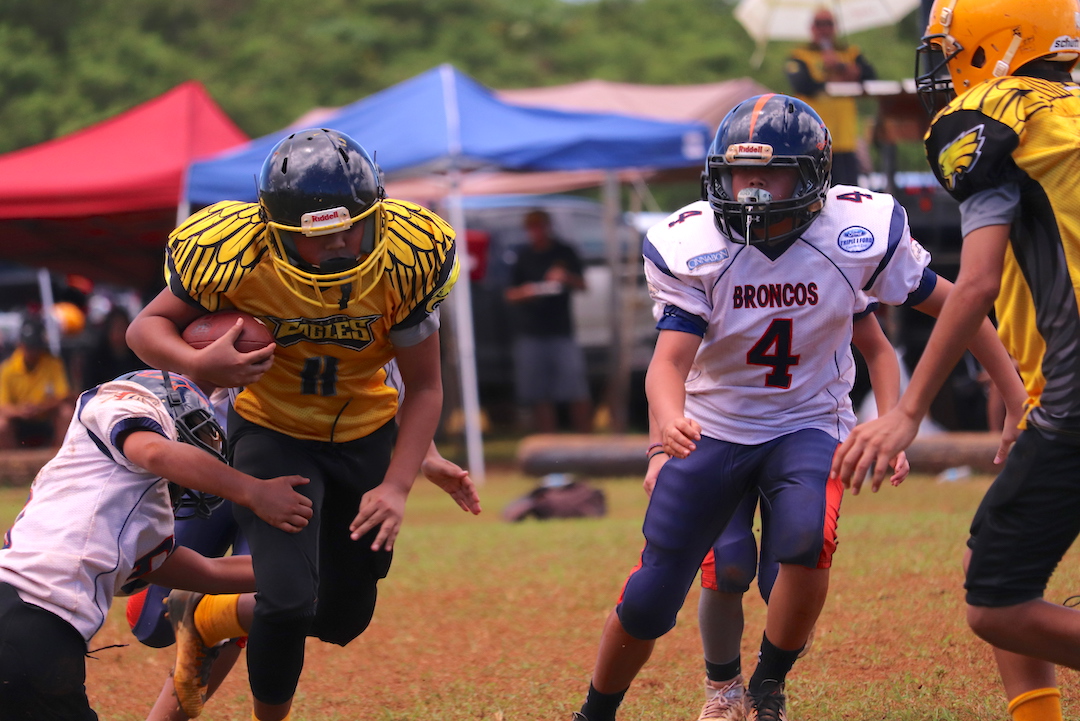 In the third week of GNYFF football, the Island Eagles would successfully defend their home field in their Manha matchup with against the visiting Broncos.

The Eagle’s defense would be a major factor in keeping their opponent scoreless, as Eagle’s defensive players Uriah Wessling and Liam Charfaurous would swarm the Bronco’s backfield to keep their run game limited, but it would be the all-around efforts from Mackenzy “Big Mack” Sablan that would help the Eagles get the victory. He would accumulate a handful of tackles-for-loss, two of which would force fumbles, as well as run in two touchdowns.

The game began with both teams struggling to get their offenses going. The Broncos would work running back, Leelan Nededog, in an attempt to strike first, but after a failure to reach the end zone, the Eagles were given the opportunity to get their backs going.

The Eagles would handoff the ball to Landon Suzuki, who broke through the line and stopped just short of the goal line. From there, the Eagles drew first blood as they put the ball in the hands of their power-back, “Big Mack” Sablan. On defense, they used that momentum to stop chance the Broncos had at scoring before the end of the half.

The next half would be a complete takeover for Sablan, who used his quickness and strength off the line to get in the backfield before the quarterback even handed off the ball, causing a fumble which was recovered by the Eagles.

The Eagles would quickly lose possession of the ball through a fumble, but were once again bailed out by Mackenzy Sablan who stripped the running back of the ball once again. This time the Eagles were determined to capitalize on the tremendous effort from Sablan, as they handed the ball off to running back Lukas Sablan, who ran the ball up the field until he was stopped just short of the goal line. The Eagles would pay Sablan for his efforts by allowing him to finish off the drive by capping it with another rushing touchdown.

The Broncos would once again struggle to convert on downs, giving the ball up to the Eagles once again, who made way for Landon Suzuki to break away for a 33-yard touchdown to end the game.