The Raiders ground out a muddy 22- 6 victory in their Matua Division matchup against the Packers as the GNYFF resumed after two weeks of weather-related delay. 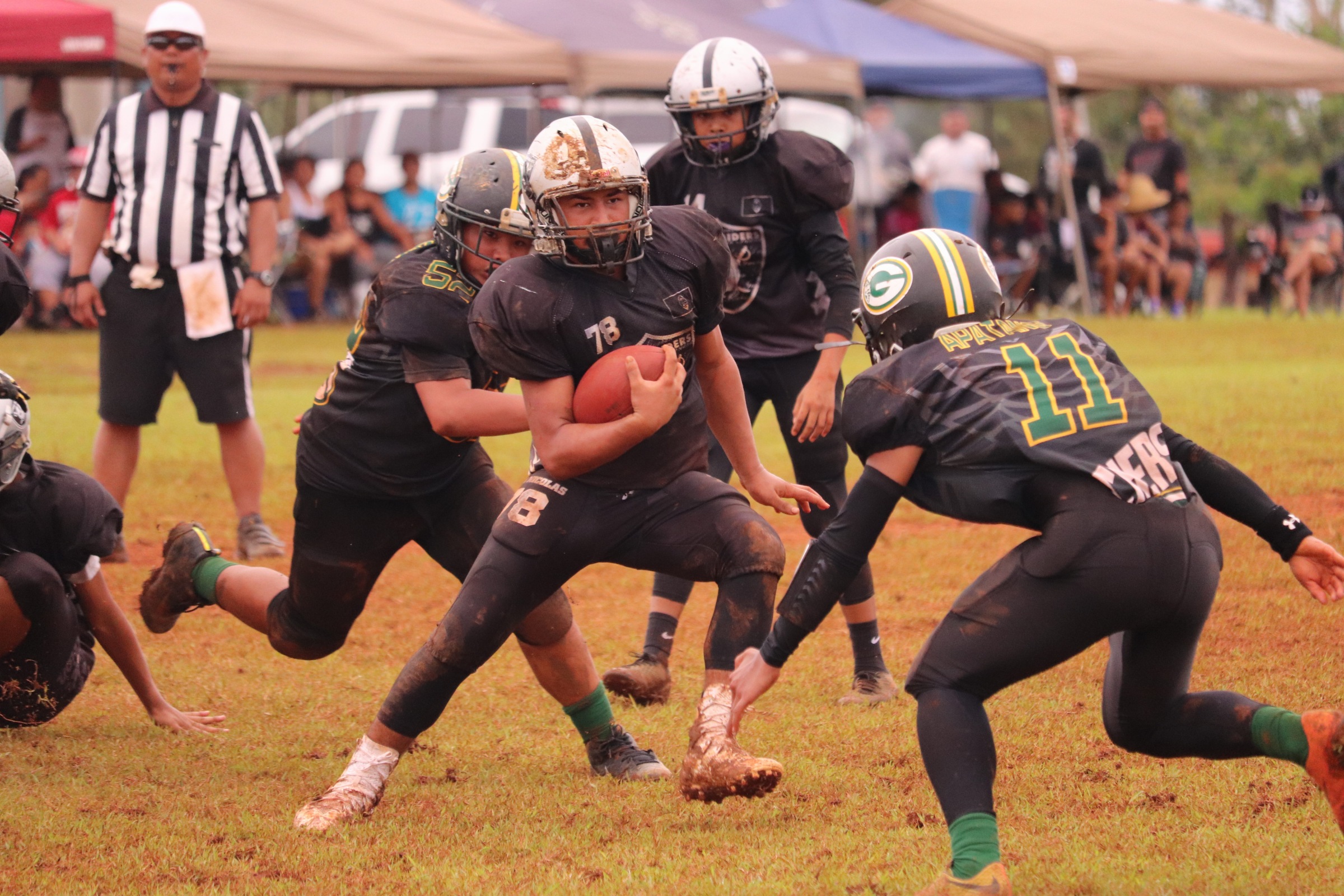 The Raiders ground out a muddy 22- 6 victory in their Matua Division matchup against the Packers as the GNYFF resumed after two weeks of weather-related delay. The tough Raiders defense was a major factor in their win as they managed to score defensively twice, once off of a strip fumble by Kin John San Nicolas, and another through a safety from a bad punt near the Packer’s end zone.

The Raiders offense would also attribute to the victory off a key performance from Makoa Duenas, who converted three three fourth and longs in the air while also throwing a touchdown. The offense would also thrive from the backfield performances of Kin John San Nicolas, who ran for an 80-yard touchdown, and Kyle Potter, who powered the ball up the middle to move the chains forward.

The Raiders improve their record to 4-1, and with two weeks left in the season, the young group are looking to make a run in the playoffs.

“We’re not gonna change much. It’s all about hard work, and we just have to keep improving in practice”, said Makoa Duenas when asked what his team’s perspective as they approached playoffs.

Both the Raiders and Packers offense struggled to get going off their first possession as their defenses clogged the lanes and stopped the ball for short yardage gains, but a long punt from the Raiders put the Packers backs against the wall on their own endzone. The Raiders stripped the ball away from the runner when the defense stood him up, and Kin John San Nicolas picked up the ball and ran the ball in for the first score of the game.

The Raiders would ride on this momentum into the second quarter as running backs Potter and San Nicolas would move the ball forward, setting up for a 40 yard touchdown bomb from Makoa Duenas to wide receiver, Jaraze Sapeymai. The defense would continue their dominant performance by pushing the Packers up against their end zone for the second time. The Raiders would score a safety after a bad snap ended up behind the punter and out of bounds.

The Packers came out in the second relying on quarterback, Dreyvin Apatang, to air the ball out down the field, but when the Packers attempted to convert on fourth and long, Apatang threw a ball into double coverage, where it was picked off by Raiders corner, Azarias Quichocho.

The Raiders took advantage of the defensive play as San Nicolas bounced to the outside and won in a foot race along the sideline into the endzone for an 80-yard touchdown, making it his second of the day.

“Originally, the play was supposed to be up the middle, but I ran to the outside and just ran as fast as I could” commented the speedy San Nicolas.

The Packers would eventually score after a pass from Apatang to wide receiver Jaython Dejesus moved the yard marker up to the edge of the endzone, where Apatang ran a quarterback sneak up the middle for a touchdown.