PANTHERS KNOCK BULLDOGS OUT IN FIRST ROUND

The Guam High Panthers opened up the first round of the IIAAG Football Playoffs playing host to the Okkodo Bulldogs Friday evening. Despite a slow start, Guam High eventually got into rhythm to knock off the Okkodo Bulldogs 41-6 with the Bulldogs getting a touchdown on the last play of the game to avoid the shutout. 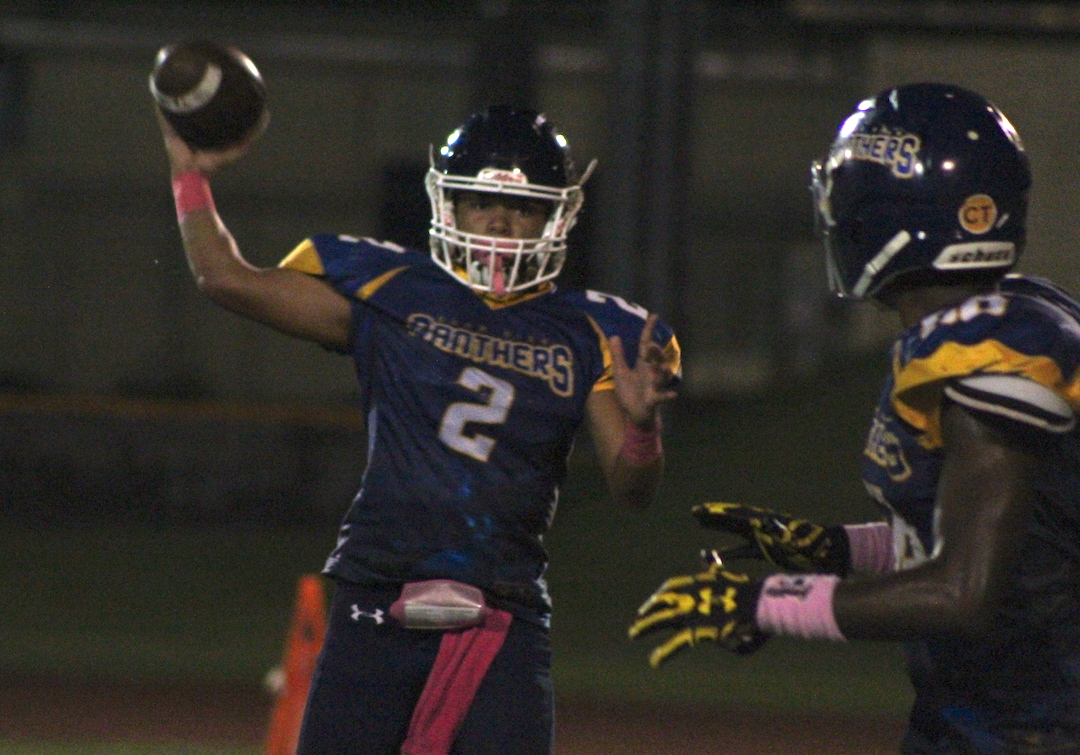 The Guam High Panthers opened up the first round of the IIAAG Football Playoffs playing host to the Okkodo Bulldogs Friday evening. Despite a slow start, Guam High eventually got into rhythm to knock off the Okkodo Bulldogs 41-6 with the Bulldogs getting a touchdown on the last play of the game to avoid the shutout.

The Panther offense didn’t fire off as quickly as they would have liked, but their defense stepped up in a big way. Defensive back Jayson Jackson picked off Bulldog quarterback Davin Blas three times on the night, getting his first at the goal line to squash a successful drive from the Bulldogs in the 1st quarter.

Jackson’s interceptions were key, but he was a little upset with himself for not being able to take those interceptions back to house for a touchdown. His third interception came in the 2nd quarter, and was the most promising chance after Jackson had picked the ball off at midfield. Instead of staying on the outside, Jackson cut back in and was eventually caught in the red zone.

“I was trying, but that last one was my fault and I just wasn’t paying attention,” said Jackson.

Jackson knew tonight was going to present a lot of opportunities to make a play of defense after grabbing two interceptions against Okkodo in the regular season.

Wendy’s Players of the Game: Jayson Jackson and Travon Jacobs

As for the Panther offense, a quick opening drive touchdown from Curtis Bukikosa in the red zone and a 23 yard run from ReSean Jacobs quickly put Guam High up 14-0 in the 1st quarter. But three straight empty drives, including a turnover on downs at midfield was enough to frustrate quarterback Travon Jacobs.

“What was frustrating was that we practice all the time about getting to line at a fast tempo and the fact that we weren’t doing that, I felt we could be playing much better than how we started. But my line responded, they always do, and we played better in the second half,” said Travon.

After the turnover on downs in the 2nd quarter, the Panthers would put together two strong drives that ended in a one-yard touchdown run from Anthony Bow and a pass from Travon to RaSean to rock a 28-0 halftime lead.

Jacobs would punch in a rushing touchdown on quarterback keeper in the 3rd quarter and older brother RaSean would get the games final score in the 4th quarter to go up 41-0 with Brennan King knocking in her fifth PAT on the night.

Okkodo went for broke on their final drive with Blas hitting tight end Ethan Sanchez in the corner of the end zone from 15 yards out to avoid the shutout.

The Panthers have only lost twice this season to the top seeded FD Friars and second seeded GW Geckos. Guam High will travel to the GW Field next Saturday with a title shot on the line.

“We just have to play like it’s our last game. We have to capitalize off of their mistakes and play at a fast tempo like we usually do during practice and it’ll be a good game,” ended Travon.

“Our defense is looking good, but we still are going go have to come out better and fix our mistakes in our game against GW,” said Jackson.