PANTHERS TAKE A BITE OUT OF THE BULLDOGS 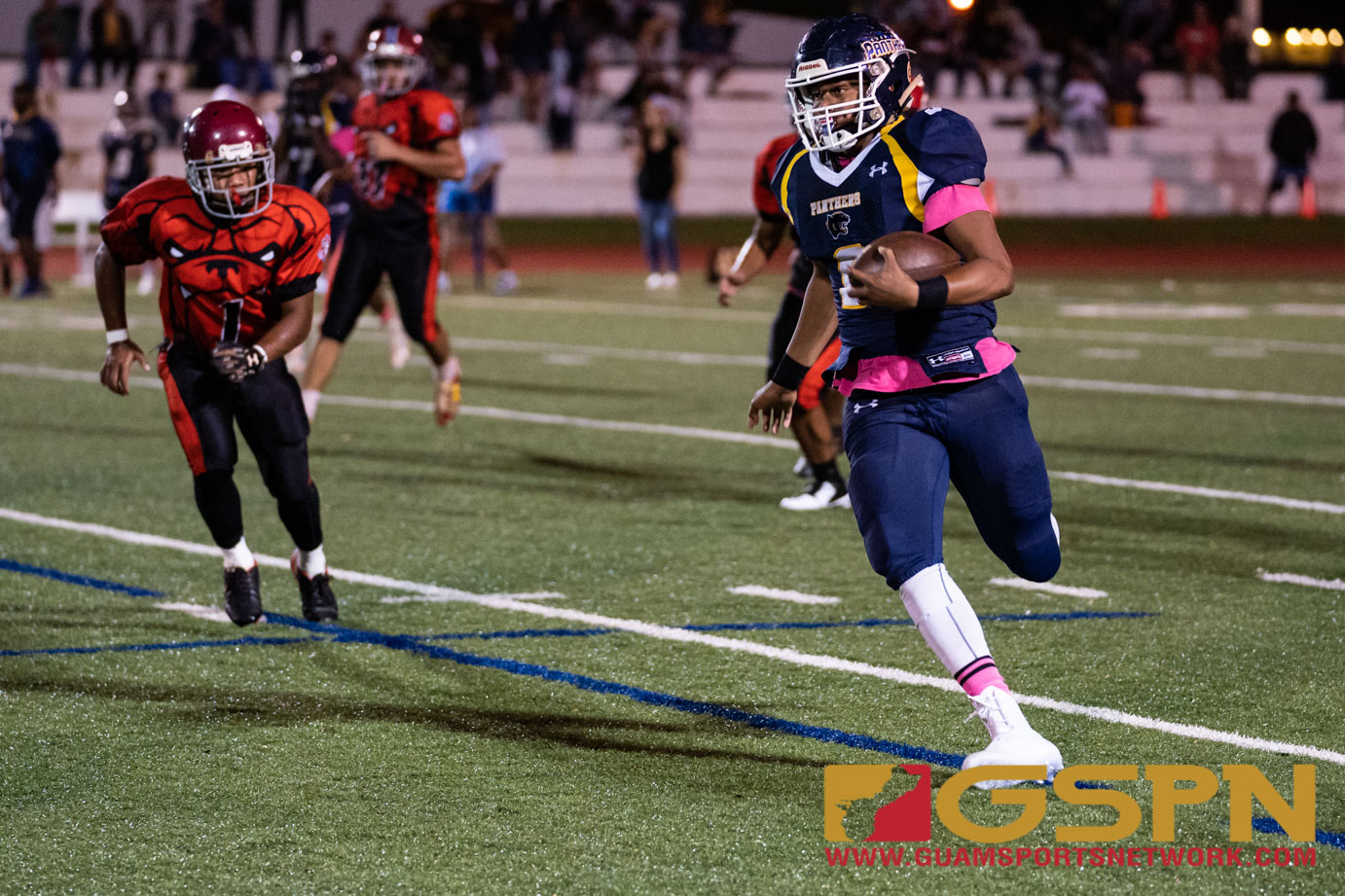 RaSean Jacobs had three first half touchdowns to lead the Guam High Panthers to a 42-0 victory over the Okkodo Bulldogs on the Panther home turf. The victory helps improve the Panther chances to host a IIAAG Football League first round playoff game next month.

Penalties once again plagued the Panthers with 13 penalties for 125 yards alone in the first half Despite the holding and the offside calls, the Panthers moved the chains at ease against the Bulldogs.

Jacobs had two touchdowns in the first quarter with rushing scores from five and 35-yards out. A pair of interceptions by the Panther secondary helped set up the good field position with Tyler Phan and Jalen Thach making the picks for the Panthers.

“It’s good we won today but it’s the fundamentals and basics we got to work on. We need to get better at fundamentals to compete against the big teams in the playoffs like FD and GW,” said Phan. Phan had limited time on the field but finished with a team high five tackles (2 for losses) and an interception.

Guam High quarterback Travon Jacobs threw a 53-yard completion to Drew Mestas which set up a touchdown by Sincere Powell to lead 20-0 after the first quarter. Powell avoided a pair of Bulldog tackles for the 15-yard touchdown.

The offense continued to move the chains in the second quarter for Guam High with junior running back Julius Gaduang following his blockers for big gains. Gaduang’s runs set up ReSean Jacob’s third touchdown, another 5-yard touchdown run to lead 28-0. The Bulldogs turned the ball over with their third interception of the game with Guam High’s Ruben Ramirez making the pick just before halftime.

The interception enables the Panthers to score via quarterback sneak by Travon Jacobs to lead 34-0 by halftime.

The Okkodo squad entered the third quarter determined to get into the end zone. Ethan Sanchez moved the chains for the Bulldogs with a big 39-yard gain to enter Panther territory. Bartolome Jose Abuan gained more positive yard to enter the Panther red zone.

The Panther defense was stingy on their home field and defended the pass plays with freshman defensive back Andre Johnson getting his hands on a potential touchdown. The Bulldogs surrender possession after failing to convert on fourth-and-one and Gaduang takes over.

Gaduang followed his blockers and took off for a 65-yard touchdown in the final period to add more points to the Panther scoreboard. “It was my first touchdown ever and to be honest I almost got emotional,” said Gaduang.

The Bulldogs continued to go to work despite the huge deficit and once again found themselves in the red zone after big pass competition from quarterback Damian Cruz to Sanchez. Abuan bulldozed his way inside the 10-yard line and it was first-and-goal for the Bulldogs.

The Panthers were determined to keep the Bulldogs out of their end zone and a good read by Johnson ends their hopes of scoring before regualtion ended. Johnson’s interception was the fourth pick of the game for the Panthers.

Gaduang had a huge game with 162 rushing yards on 15 carries, he also caught a pass for 11 yards.

“I learned that if you start a game strong, you will finish strong; if you are hungry then keep eating. That’s how I was today, I was hungry to grab the ball and just run,” said Gaduang of his career day.

“Our defensive line did really good tonight and our second unit got some stops late in the game,” said ReSean Jacobs.

The Panthers will meet the Southern High Dolphins next week in a showdown for playoff home field advantage. Next week is also homecoming for Guam High. “Next week is nothing special, we are just going to play. That’s all we have to do next week, play,” said ReSean Jacobs.