RAIDERS GET REDEMPTION IN WIN OVER EAGLES

The Raiders were waiting for a rematch since falling to the Eagles in the 2017 GVFL title game. They got their shot at redemption Saturday and delivered in a big way as they clipped the defending champs 30-12 behind a two-touchdown day from Jesse ‘Pumpy’ Manglona receiver Storm Rosario. 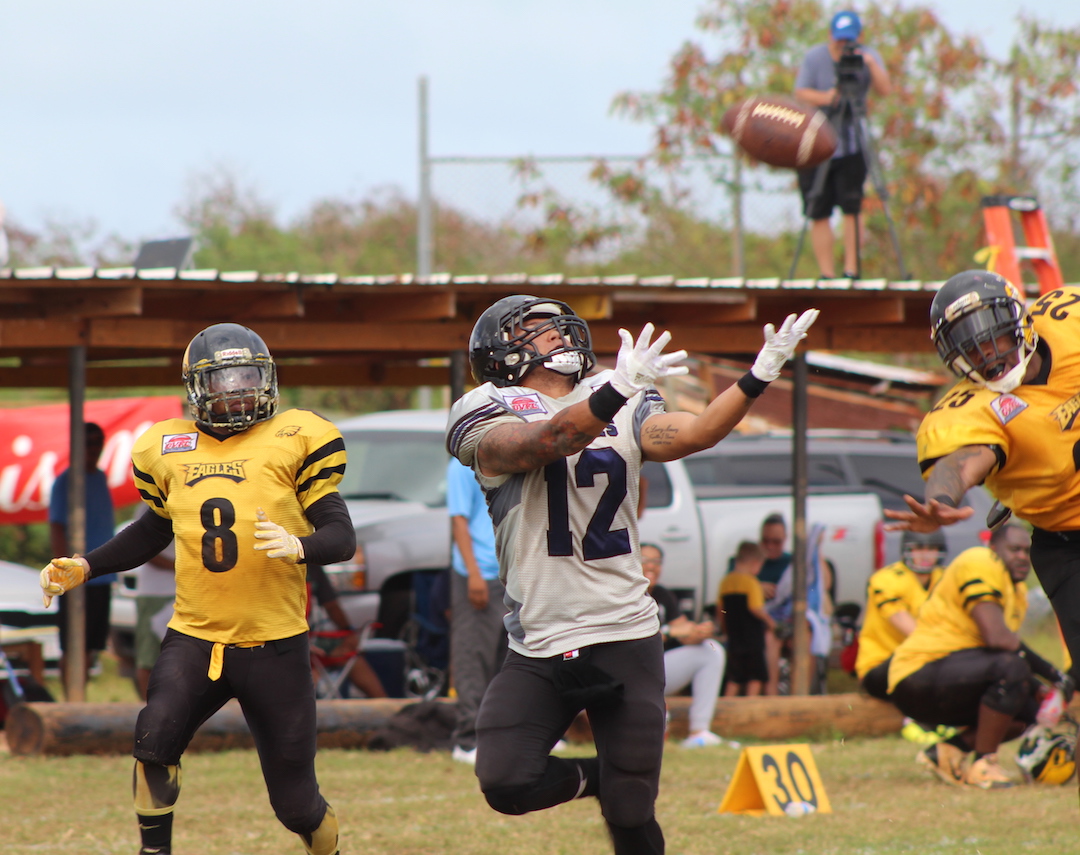 The Raiders were waiting for a rematch since falling to the Eagles in the 2017 GVFL title game. They got their shot at redemption Saturday and delivered in a big way as they clipped the defending champs 30-12 behind a two-touchdown day from Jesse ‘Pumpy’ Manglona and receiver Storm Rosario.

“We were extra motivated,” said Manglona on facing the Eagles. “We haven’t lost a game like that championship game in over five years so it really made us realize that we needed to step up our game. That’s what we did today, we came back strong and played good, hard Raider football.”

With the score close 8-6 at the half courtesy of special teams touchdowns in the 2nd quarter, the Raiders were out to wear down the Eagles defense. The Eagle offense was handed a blow early as starting quarterback Steve ‘SP’ Phillips went down with a leg injury and would not return.

Wendy’s Players of the Game Storm Rosario and Jesse Manglona

After two three and outs by both teams, Raider quarterback Danny Manibusan dialled up a long-distance call to Storm Rosario, and Rosario answered. Beating the Eagles Secondary to the ball, Rosario hauled in a big 35-yard touchdown catch to put the Raiders up 16-6.

Rosario wasn’t done as he and Manibusan connected early in the 4th quarter inside the red zone for a 22-6 advantage.

After already returning a punt 67 yards to the house, Manglona put the finishing touches on the game by running loose through three Eagles defenders for a 50-yard touchdown, putting the Raiders firmly ahead 30-6 via a successful two-point conversion.

‘Pumpy’ made his debut for the Raiders in 2018 after missing opening week.

“I started slow because my legs weren’t used to the running and they felt heavy. Their defense was strong in the beginning, but we started to turn it around after halftime. We caught our second wind and everyone stepped up on both offense and defense,” said Manglona.

The Eagles scored a late touchdown before the games end, but the Raider offense played keep away by grinding out the clock to secure the big win.